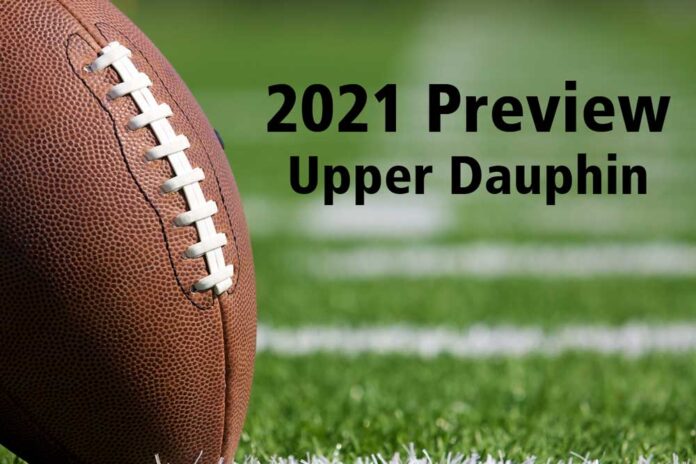 Outlook: While the departures of a sizable senior class that fueled the Trojans’ impressive run to Tri-Valley League and District 3 Class 2A championships, as well as a berth in states, injuries also took a bite out of Kent Smeltz’s club even before UD lined up for its regular-season opener. Hopefully, those setbacks won’t hinder the progress of a promising squad for a second straight year. Yet while Upper Dauphin is working with its third quarterback in as many seasons, Smeltz’s group features an experienced offensive line and several veteran backs capable of going yard on any down on running plays and with a quick flick to the flanks. Where the Trojans hope to improve is on the defensive side of the ball, particularly since UD struggled throughout 2020. If Smeltz’s bunch can get off to a strong start — UD will play its first three in Elizabethville — these guys could be right there at the end challenging for Liberty Division supremacy.

1. Offensive front must lead the way so several dimensions can get comfortable as quickly as possible: With an intriguing mix of experience and some size, offensive linemen such as Dillon Johns, Chase Lentz, Colton Reed and Peyton Wentzel need to be effective early so Smeltz’s Trojans can get the ground game functioning smoothly behind explosive backs such as Brady Morgan and Aiden Wiest can find cracks in the defense that will allow them to reach the second level and beyond. Christian Snyder is the third piece of UD’s running back puzzle, but he’s nursing a surgically repaired hand and the Trojans aren’t sure when he’ll be available. These guys have shown the ability to break off runs — Snyder, Morgan and Wiest averaged 7.3, 7.7 and 11.0 yards per carry, respectively, in 2020 — consistently. All three can catch the ball, too. “Our offensive line has been doing well,” said Smeltz, the former Line Mountain and Mansfield University standout. “We have a lot of returning starters there. We need to have a big year from them. … We definitely want to take advantage of that offensive line and be able to run the ball.” UD’s O-Line also is going to need to be effective in pass-blocking situations since the Trojans will debut first-year senior Wil Laskowski when they open against James Buchanan. “Obviously, we have a lot of inexperience there,” Smeltz added. “He’s a good athlete and he’s very smart — but he’s also very inexperienced.”

2. Smeltz hopes defensive unit returns to form: While the Trojans played from in front throughout the 2019 campaign, that wasn’t the case last season as UD encountered all sorts of problems trying to keep a lid on the opposition. So, obviously, Smeltz is trying to shore up the defensive side of the ball and limit opposing teams from keeping the sticks in motion while scoring drives unfold — long ones and quick ones. “No matter what level of football you’re playing, I believe the key is you’ve got to be able to stop the run,” Smeltz admitted. “Obviously, that’s a big emphasis for us. We want to put teams in 3rd-and-long. We took a step back last year with our defensive unit, so we’re hoping to show big improvement this year. Two years ago we led the (Tri-Valley) league in defense. That’s the expectation, that’s the standard and we certainly didn’t meet that standard last year. Hopefully, we’re going to be much improved.”

3. Laskowski’s crash course in quarterback play features a tutor that’s been there and done that — any number of times: Although Laskowski may be strapping on a helmet and shoulder pads for the first time at the varsity level, the 6-0, 170-pounder has been the Trojans’ starting lead guard on the Upper Dauphin basketball squad for several seasons. So, he’s been the guy with the ball in his hands frequently and that means making critical decisions repeatedly. And Smeltz believes Laskowski’s experience at the lead guard spot will translate nicely to the quarterback role on the football field. “His ballhandling skills are very good,” Smeltz stated. “His decision making is very good. All the things you would expect from a point guard in basketball is carrying over to football.” Laskowski’s also benefited from plenty of hands-on instruction from Tom Hain, the 70something UD alum who fronted the Trojan football long enough in the 1960s, 1970s and 1980s to pocket 174 victories and nine Twin Valley Conference championships. Hain is charged with overseeing UD’s quarterbacks and defensive backs. Hain also spent plenty of winters in UD’s Foster Gymnasium, however, working alongside his former coach, Gordie Foster, before running the program for several seasons. “I’m fortunate to have Tom Hain on our coaching staff,” Smeltz admitted. “He’s a big part of Upper Dauphin’s tradition and history. He’s a real asset.”