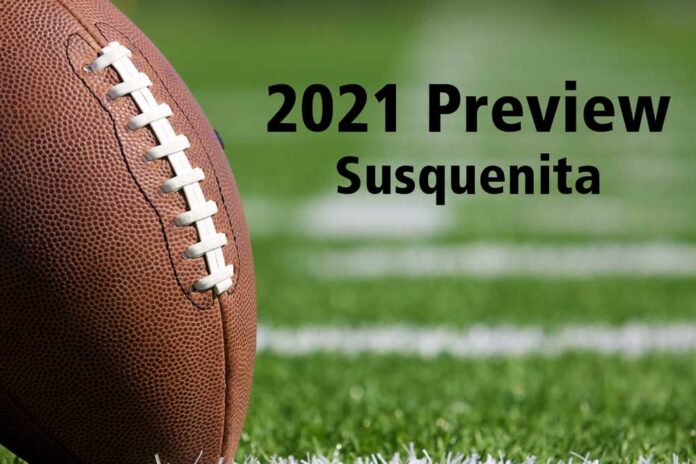 Outlook: About to begin his first season fronting a high school football program, Augie Glass has overhauled a number of things and shifted a few players from one position to another as the former Harrisburg High assistant and alum quickly put his own stamp on the Susquenita program. And while Glass inherited some talented youngsters from predecessor Scott Acri — with varsity experience — he definitely is going to need his sophomore class to be productive since only a handful of seniors and juniors are being counted on to play leading roles for the Blackhawks. So, if those youngsters settle in quickly and perform as Glass believes they can, this program could make plenty of noise in the Mid-Penn Liberty and possibly contend. A quick start would add momentum and reinforce those remarkably positive preseason thoughts.

1. Run-pass balance is the objective and Gibney will be at the helm: Hoping to establish a strong running game yet have the capability of striking from everywhere, Glass and offensive coordinator Myron Selby spent summer workouts installing their system while trying to speed the development of sophomore quarterback Derek Gibney. So far, so good. “We had to wipe his memory from last year in the triple option,” Glass admitted. “So, this summer it was important for him and everybody else to buy in early. It didn’t take long. He put in the extra work. He runs our offense. We’re actually OK with him to call plays. That’s how much he’s picked up and that’s how he gets all the guys lined up. He knows all the calls. He knows the protections. Now he just needs to perform. We’re definitely comfortable with him throwing the ball.” And Gibney’s throws could be targeted for backs such as Tyler Fisher and Louie Frisenda, or he could test the perimeter by chucking the ball toward receivers such as Bryce McKee, converted offensive lineman Mason Figard and Kamar Lewis. Stay tuned. “We definitely want to get them the ball. We basically want to make teams defend the whole field.”

2. As for the sophomores … : While Gibney, McKee and Lewis are just several parts of Susquenita’s promising present, they’re likely going to be cornerstone players as the Blackhawks move forward. At least, that’s what Glass has in mind. “I love it,” Glass said of a starting lineup that features two seniors and four juniors while the rest are primarily sophomores. “I feel blessed. I knew what I was coming into, for one. As a new coach, I was like, ‘Man, I actually have these kids for the next three seasons.’ That means they have time to adapt to the program, but the following year we’ll be even stronger because they already know it now.”

3. Leaving a lasting impression: While the Blackhawks will open the 2021 campaign with road dates at Elco and Liberty Division playmate Line Mountain, Glass believes the first seven outings can be labeled as tough games. So, he’s trying to impress upon his club how important consistency is — especially when it comes to intensity and 48-minute effort. It’s all part of his plan to construct a program that’s perennially at or near the top of the Mid-Penn Liberty. “Our motto is new level. We’re trying to get to a new level,” Glass said. “We’re trying to do something that school hasn’t done ever. We don’t have any banners. We don’t have any trophies. It’s all wrestling and field hockey. … They’ve picked up our program quick. They’re hungry. These kids are hungry to win.”