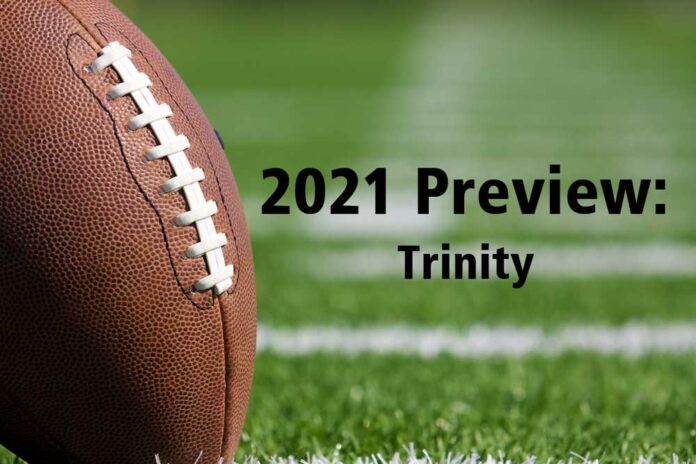 OUTLOOK: Spend five minutes chatting with Hill, and you just might forget you’re talking to an ex-NFL player. He enjoys talking about his players and coaching philosophies and is eager to soak up any football knowledge he can acquire. Under Hill, practices at Trinity have become games within the game, so to speak, with players pushing each other to the limit to win every drill. It’s going to take that kind of a competitive attitude for the Shamrocks to have a puncher’s chance in the Capital, where they could very well be the underdog in every division game they play. Keep a close eye on freshman cornerback and wide receiver Santanna Young. Quick development from the youngster could very well hasten the turnaround process for the Shamrocks, who are looking to snap a 10-game losing streak that dates back to 2019.

3 THINGS TO KNOW
1. Name recognition
Who is the most recognizable player on the Trinity sidelines? Well, that would be the team’s new head coach: Jordan Hill. He was an all-state defensive tackle for Steel-High and an all-Big Ten selection for Penn State before winning a Super Bowl with the Seattle Seahawks in a five-year NFL career derailed by injuries. Since being named to lead the Shamrocks’ program in February, Hill and his coaching staff have been quickly embraced by the players, many of whom grew up watching him play. Could the name recognition be a draw for the once-great Trinity program, which is seeking its first winning season since 2012? Well, considering there are already 55 players out for this season, we’ll say maybe. “I could definitely see it as a plus, but I wouldn’t say for someone to come here just for me,” Hill said. “Take a look at what this place offers, the culture and the whole school. This is a place where kids want to be.”

2. Bonds of Steel
Hill is, through and through, a Steel-High guy. He can only smile and laugh knowing that fate would have him leading the once-hated Shamrocks, who went 1-3 against Hill’s Rollers from 2005-2008. “I thought about that when I was making my decision,” Hill said. “Ten years ago I would have never told you this would be my first head coaching job. But six months into this thing, I’m glad for the decision I made.” Hill is joined on the sidelines by several others from the Steel-High circle, including Jordan Smith, Jordan Milberry, Kevin Yarnevich and Jeremiah Young. Emotion and nostalgia should be high when the defending 1A state champion Rollers visit COBO Field on Oct. 8. “The Capital is a strong division, and obviously, my alma mater is the top dog. I wouldn’t have it any other way,” Hill said. “It’s the place where I’m from, and I want to see them be successful no matter what. But as long as we’re in that division, I’m hoping they finish second.”

3. A “Young” star
To have a chance to win in the competitive Capital, Trinity will be looking for a promising freshman — Santanna Young — to make plays for the Shamrocks this season. He is the nephew of the aforementioned Jeremiah Young, Trinity’s RBs coach, who in 2008-09 became Pennsylvania’s all-time leading rusher with over 9,000 career yards. Young, listed as a 6-foot, 180-pound cornerback and wide receiver, possesses the speed, size and hands you’d normally see on an upperclassman. Look for Young to start both ways and make an impact. “He is going to be a guy that is very influential to the program right away,” Hill said. “I think he’s going to be a very good corner, and like any young guy, he’s going to want the ball. We need him to learn what it takes to be a good football player, and we hope he steps up to the plate.”