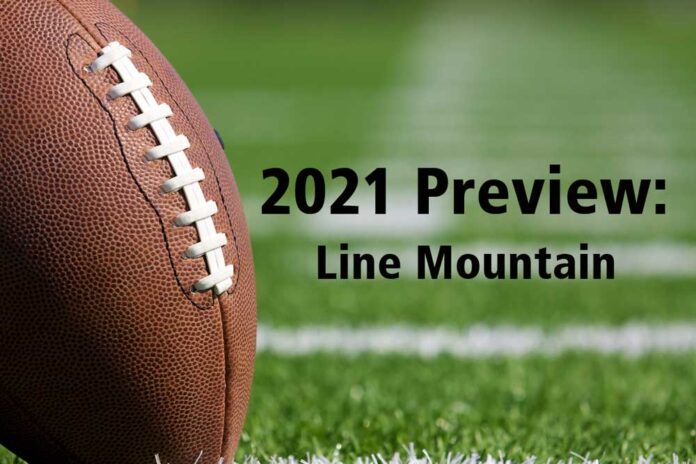 OUTLOOK: Had the Mid-Penn Liberty Division crowned a regular-season champion in 2020 — truncated schedules and all — Brandon Carson’s run-happy Line Mountain Eagles would have hoisted the hardware by virtue of pocketing one more league win than fellow league unbeaten Juniata. So, as Carson & Co. hustle into 2021, the big question in lower Northumberland County is can the Eagles prevail despite losing two runners who racked up more than 1,000 yards apiece and three all-state selections? If Line Mountain can generate a consistent offensive effort, the Eagles’ defensive unit might be stingy enough to win games with that phase — particularly since nine returning starters are available. A talented defensive outfit flush with well-tested and youthful veterans will make certain of that.

As Carson and his offensive-minded assistants brainstorm while trying to devise ways to move the football consistently, the return of guard Wyatt Shaffer, center Chase Miller and tackle Colby Rebuck provides the Eagles with a three-headed monster up front that’s been counted on to occupy defenders at the point of attack. Since all-state backs Garret Laudenslager and Jacob Feese departed — both wheeled for more than 1,000 yards — that means a slimmed-down and quicker Beau Keim is the lone ballcarrier sporting significant experience. Snyder, Miller and Rebuck also will be tasked with keeping Line Mountain’s untested quarterback — either sophomore Nick Snyder, freshman Blake Readinger or both — upright and clean. Sophomore Yari Johnson, who impressed last season on the defensive side of the ball, will add bulk and skill at one of the tackle spots. “It’s extremely critical (we get strong play up front),” Carson said. “Wyatt has done a really, really good job of being a leader. There haven’t been many vocal leaders, or leaders in general, since I took over. He’s been extremely vocal, he’s pushed his teammates and he’s pushed the younger linemen. He’s really been positive and supportive. Chase Miller has done a really nice job with that. I’ve been really impressed with that, like how they’ve been focused and how they go about practices.” Line Mountain does have plenty of experience on the flanks in seniors Aidan Herb and Jace Hackenburg, but the ball needs to get there. So … “Developing a quarterback is our No. 1 priority,” Carson said. “If we get decent play there, I think we’ll be all right.”

With nine players returning who started throughout 2020 or shared a starting spot with someone else, Line Mountain’s defensive crew figures to be extremely solid — especially early. While the Eagles may not have the star power provided by high-motored all-stater Dominick Bridi, standup end Laudenslager or inside linebacker Feese, former Temple and Shikellamy standout Jim Ermert should find plenty to like about this group as he settles into the defensive coordinator post. Johnson, Shaffer, Miller and Rebuck likely will have their hands in the dirt up front, but junior Brayden Boyer may be Line Mountain’s next sparkling standup defensive end. Keim and Chandon Maurer return at linebacker, while a quick, ballhawking secondary features Hackenburg and Nolan Baumert at corner and Herb and Connor Finlan at the safety positions. “What we’re hoping to do is get 11 guys on the field and all of them contribute,” Carson said. “I’ve been very, very pleased with our practices. The kids really enjoy coaching. They’ve been working hard, even though we’re really young overall. The coaching staff has done a really good job.”

3. Youth is everywhere, but those deserving to play will

While Line Mountain likely will trot out a handful of sophomores in Week 1 at Juniata, Carson won’t hesitate to play other youngsters if they show well in practices and ultimately games. Johnson, Maurer and Baumert logged plenty of defensive snaps last season, while Rebuck worked his way into a starting role on the offensive line. With Feese gone, Snyder and Readinger are vying for the starting quarterback job. Athletic freshman Ian Bates has impressed during preseason practice, while untested senior Micah Sgrignoli moved over from the soccer program and he, too, has all sorts of quicks and hops. Others, too. While Carson knows youngsters are prone to make mistakes, he realizes his Eagles must keep things crisp and clean if they hope to finish among the Liberty’s best. “We cannot turn it over, and we need to make plays when we have to,” Carson said. “We also need to get the ball into our athletes’ hands … and my young guys are really athletic.”