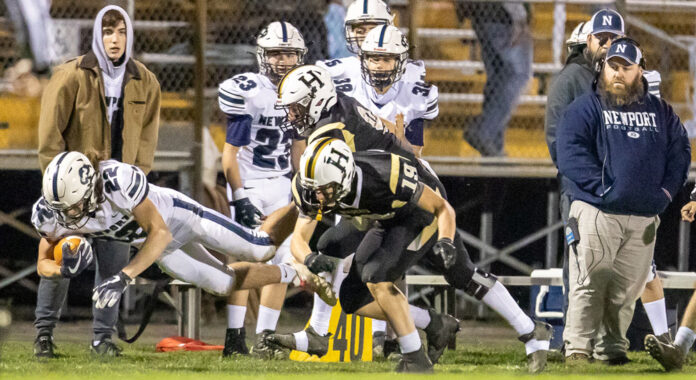 Piling up nearly 500 offensive yards in a 49-36 conquest of Halifax — its second victory and second straight impressive outing for its attack — Newport is hoping to conclude its campaign by turning back Perry County rival West Perry Saturday night in Elliottsburg. The game was pushed back one night due to a COVID-19 flare-up that cost the host Mustangs last weekend’s tussle with Trinity. Andrew Bates had a huge night for Todd Rothermel’s Buffaloes (4-2), rushing for a quarterback-record 210 yards and three touchdowns while adding 112 yards and another score through the air. Senior running back Thomas Pyle neatly complemented his junior teammate by piling up 161 rushing yards and three scores as the ‘Port led throughout. Pyle’s rushing output was just one yard fewer than the career-high 162 yards he posted the previous Monday in a 42-28 triumph over Upper Dauphin.

Taking advantage of every yard piled up and every touchdown scored, the senior tandem of Garret Laudenslager and Jacob Feese closed out their Line Mountain grid careers by combining for 448 rushing yards and five touchdowns in a 42-34 victory over Mifflinburg. Laudenslager collected 232 yards and scored on runs covering 56, 29 and 80 yards, while Feese totaled 216 yards and authored touchdown runs of 29 and 78 yards for an Eagles team that trailed 14-13 at the break. Laudenslager’s rushing output gave him 1,154 yards and 14 touchdowns, while Feese cracked 1K (1,053) for the second straight season while totaling 17 scores. Feese also fired a 12-yard touchdown pass to Cameron Smeltz that helped the Mountain end a two-game slide. Laudenslager also paced the Eagles with 11 tackles, one more than Dominick Bridi. Bridi paced Brandon Carson’s club from his defensive end spot, racking up 66 stops, 11.5 for losses and a handful of quarterback sacks.