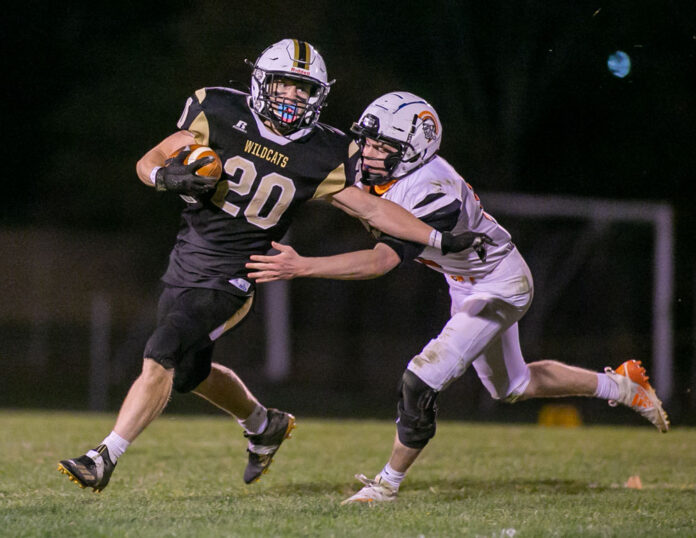 Powered by a productive running game that’s featured six triple-figure rushing totals in four outings, Line Mountain has averaged 47 points per game during a three-game winning streak that has elevated Brandon Carson’s Eagles (3-1, 2-0) to the top of the Mid-Penn’s Liberty Division standings. And while breakaway running back Garret Laudenslager and driven quarterback Jacob Feese have consistently popped impressive numbers, Carson will quickly tell you how effective his rebuilt offensive front has performed. While veterans Dominick Bridi and Wyatt Shaffer operate at left guard and left tackle — the Eagles will use that left-sided push on the goal line or when they need to move the sticks — others such as center Chase Miller, right guard Colby Rebuck and right tackle Seth Wolfe have been just as critical to a surge that has Line Mountain contending for a District 4 Class 2A playoff spot. Come Friday night at Glenn Ressler Field, the Eagles will chase consecutive victory No. 4 against a Newport side (2-0, 1-0) skippered by Line Mountain alum Todd Rothermel that’s been idled since Oct. 2 by a COVID-19 flare-up. Feese was the instigator in last weekend’s 47-20 triumph at Northwest Area, rushing 13 times for 141 yards and four first-half touchdowns as the Eagles opened a 33-7 lead at the break. Feese also threw for 104 yards (6-for-10) — Laudenslager caught three balls for 72 yards — while Laudenslager rushed 13 times for 68 yards and two scores. Line Mountain’s defense also scored for the third game in a row, as the agile Bridi motored 88 yards with a Northwest fumble early in the second half. A 6-foot-1, 215-pound senior with plenty of agility, Bridi led Line Mountain with 12 tackles and leads the Eagles with a season-best 32 stops. Cameron Smeltz, who bagged the first of Line Mountain’s three defensive scores, added 10 tackles. Newport, which also is slated to play Monday night against Susquehanna Township, downed Susquenita 20-6 the last time the Buffaloes played. QB Andrew Bates rushed 11 times for 119 yards and one score, but also returned a botched lateral 30 yards for another TD. Bates accounted for Newport’s third score as well, connecting with Will Davis for a 19-yard TD.

About to make its 2020 debut at Klingensmith Stadium, Kurt Condo’s resourceful Juniata Indians (3-1, 1-0) are coming home seeking their fourth win in a row after holding off Lancaster Catholic 28-20 in overtime. It was Juniata’s second straight success in OT, following a 21-14 triumph one week earlier at Lower Dauphin. Jacob Condo banked the game-winning points at Catholic by crashing over in OT for a short-yardage TD. Condo also passed for 115 yards (10-for-19, 1 pick) with both of his touchdown passes thrown to Manny O’Donell. O’Donell hauled in four throws for 73 yards. Jace White’s short run accounted for Juniata’s other score. Making the lengthy trek to Mifflintown will be a James Buchanan side (0-3, 0-1) that opened Mid-Penn Liberty play last weekend by losing 34-6 to visiting Susquenita. Unable to get any traction on the ground — JB rushed 30 times for minus-10 yards and was sacked nine times — Cliff Pine’s Rockets managed only a 19-yard touchdown pass from Caden Stoner to Mason Line. Stoner threw for 135 yards, but only completed six of his 17 attempts and was picked off twice. JB did pocket a trio of interceptions against Susquenita, as Stoner plucked a pair and Line snagged one.

Susquenita and Halifax to collide

Finally in the win column last weekend after stopping James Buchanan 34-6 on the road, Susquenita (1-3, 1-2) will try to make it two straight when Halifax (0-3, 0-3) comes motoring into Cove. Scott Acri’s Blackhawks jumped out to a 21-0 halftime lead as freshman quarterback Derek Gibney rushed for two touchdowns and hooked up with Michael Kurtz on a 39-yard heave that accounted for the third score. Gibney rushed 14 times for 108 yards and threw for 91 more (6-of-13), even though he was intercepted three times. Austin Kenny added an 80-yard kickoff return, while Louie Frisenda chipped in a 12-yard touchdown run. Susquenita also benefited from a fierce pass rush, as the Blackhawks recorded nine quarterback sacks and limited JB to minus-10 yards on the ground. Halifax continued to air things out, but it wasn’t enough as the Wildcats tumbled 38-28 to Upper Dauphin in a regionally televised contest. Micah Deitrich completed 25 of his 41 pass attempts for 262 yards and one touchdown, while Carter Enders and Ryan Stahl also tossed TD passes off gimmick plays. Stahl had a huge game, catching 11 passes for 129 yards and one score while amassing 14 stops defensively. Judah Miller also played a leading role in the passing game, catching eight throws for 118 yards and a touchdown. Feature back Bryce Enders couldn’t get untracked running the ball, but he did latch on to a handful of throws for 53 yards and a TD while making 16 tackles defensively.

Stepping out of Mid-Penn Liberty play, Upper Dauphin (2-2) will play host to Fleetwood as Kent Smeltz’s Trojans chase their third victory in as many weekends. UD racked up more than 600 yards of offense last weekend — 483 on the ground — and had three backs rush for 100 yards or more in a 38-28 victory at neighboring Halifax. Aiden Wiest picked up 167 yards on 10 carries and scored three times, Christian Snyder chipped in 109 yards on 16 attempts and crossed the goal line once, and Chance Crawford accrued 101 yards on six totes before leaving with an injury. Sophomore Brady Morgan nearly hit the 100-yard mark but fell just short with 97 yards and one score on seven carries. QB Tyler Cleveland (8-of-13, 1 interception) threw for 119 yards with Kyle Casner, Crawford and Wiest combining for six catches for 91 yards. Snyder also totaled 13 tackles from his linebacker position. Pulling into Elizabethville will be Fleetwood (1-4), which last weekend suffered a 55-49 loss to Hamburg in four overtimes. To date, that’s the longest game in Berks County history. QB Tanner Maddocks passed for 257 yards (15-for-34) and five touchdowns to lead the Tigers, with Owen Maddocks making eight catches for 145 yards and three TDs.