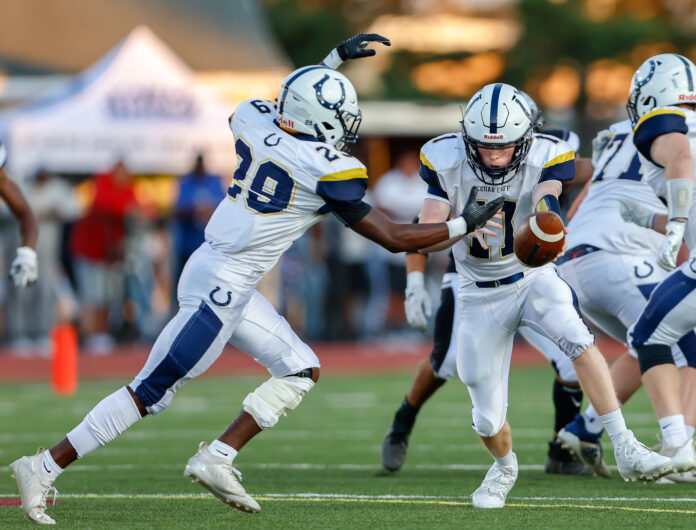 Palmyra puts a tally on the good side of the ledger:

Add another team to the winning side of the ledger in the Keystone as the Palmrya Cougars picked up victory No. 1 this season by doubling up West York in a Monday evening affair. The Cougars are the fifth squad in the eight-team division to get a win in 2021. Senior running back Richie Kowalski had himself a career night at Buck Swank. Kowalski carried the load with 30 totes for a staggering 246 yards and a pair of touchdowns. I think he should be the Monday Night Football Player of the Week with that kind of performance. Cougars have to turn around on a short week and play a rested McDevitt squad.

Watching Cedar Cliff struggle on offense like it did against CD East was a mild surprise. I was certain the Colts were not going to come out and continue to light it up against the Panthers, but I was surprised the struggles lingered all game. CD East is FAST on defense. You can only play against that kind of speed. Something tells me the Colts offense will be better moving forward because they had a taste of that kind of in-your-face speed. It was good to see the Colts defense throw their hat in the ring and try to stake a claim to having a say in the final outcome of that contest. They had sort of been along for the ride with the offense keeping the scoreboard moving to help them out. Cliff’s defense kept it a game the entire way. Cedar Cliff will take the lessons it learned from loss No. 1 and apply them against West Shore School District rival Red Land, which is 0-3 this season. The Patriots are going to get a taste of the angry Colts. Not like this rivalry needs any more juice to ignite the sparks.