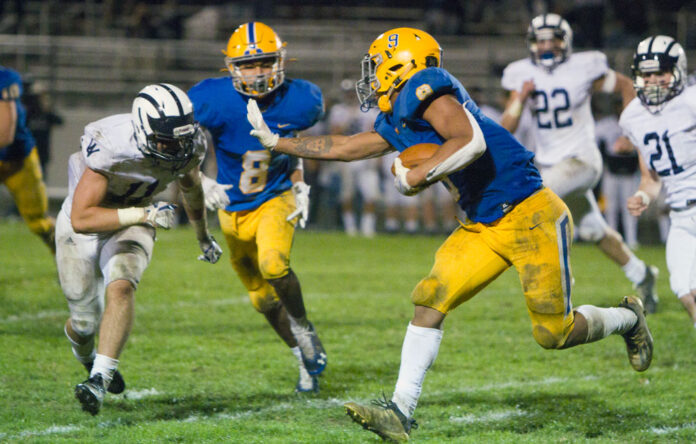 Clean play a key to the Blue Raider’s success:

Lost in the shuffle during this early part of the season is Middletown. The perennial Capital kingpin for the last half-dozen years is going through the process of a regime change in terms of its coaching staff, and they are a little light on the talent front right now. The Blue Raiders lost their opening game against Lower Dauphin to COVID-19 and then had to play McDevitt — there was nothing to gain for them in that contest. I would argue the Line Mountain game was Middletown’s Week 1 game.

And as expected it was a little choppy in spots, but the end result was a comfortable and efficient three-score win. Defensively they were solid against the Eagles. Nice matchup with Juniata this week to put some more of the foundation in place. I will say that 9-95 in terms of penalties has to stop. This club no longer has the talent and firepower to overcome mistakes at that level. In years past it wasn’t a big deal. Now it is.

Could Big Spring be a player in the Capital?:

The sleeper team I have my eye on in the Capital as we enter division play is Big Spring. On many fronts this team looks and feels ready to compete. Are the Bulldogs potential division champions? No. That’s not what I’m talking about. My hunch is Big Spring is going to be a tough out in 2021, forcing teams to earn a hard W. They feature a pair of running backs in Dillon Wakefield and Logan Schmidt who combined have nearly 450 yards, seven touchdowns and average 7.9 and 10.4 yards per carry, respectively.

QB Ethan Eisenberg is averaging nearly 100 yards a game and has three touchdowns. He’s also thrown three picks, which is a big-time target area to improve in terms of the passing game for the Bulldogs. On the other side of the ball, they have 15 TFLs, five sacks and five interceptions in three games. Those are key measuring sticks that tell me they are physically competing up front, which was an issue in the recent past. I’m keeping an eye on this club. I think they are going to be a prickly squad.