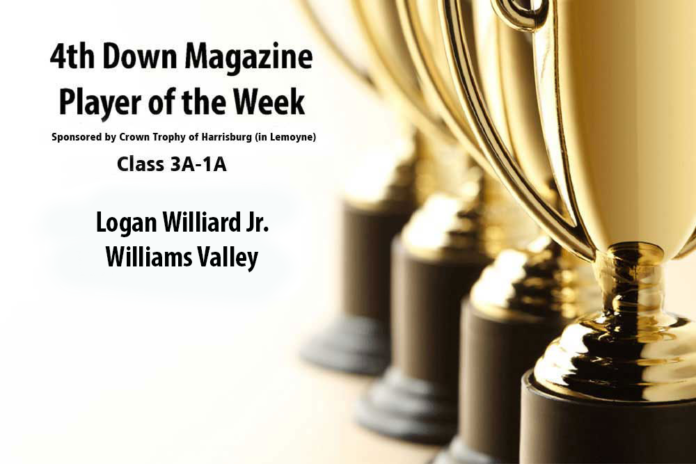 Logan Williard is this week’s 4th Down Small School Player of the Week.

The Williams Valley junior made his impact during the Vikings’ 26-7 loss to unbeaten Old Forge in the PIAA Class 1A first round Friday on defense, recording eight tackles and an interception of James Sobol. Willard, who plays linebacker and running back, also added three carries for 29 yards and a 4-yard reception.

After missing a good chunk of the first half of the season, Williard closed strong in the final three weeks, averaging 10 tackles in three playoff games, including a season-high 12 a week ago against Tri-Valley. He finished with 56 tackles, two tackles for loss, a sack, two interceptions (one he returned for a touchdown) and a fumble recovery. On offense he ran 16 times for 72 yards and a touchdown over six games.

Williard dominated the poll this week, claiming 1,711 votes. That’s more than all other nominees in the large and small school polls this week combined. He finished with a season-high in the 4th Down POTW polls with 73% of the vote. Second place this week was Boiling Springs’ Joey Menke with 495 votes.