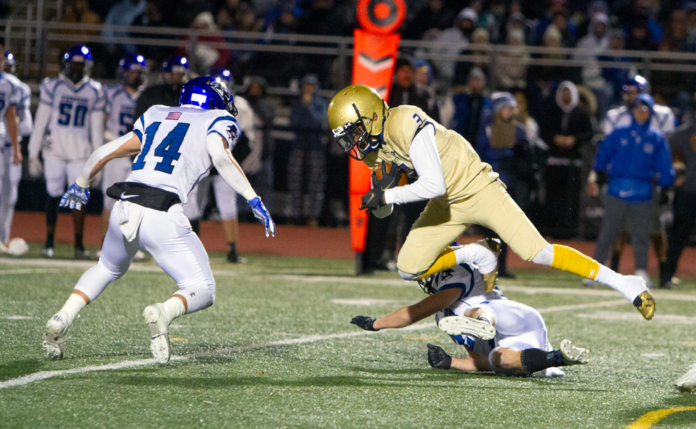 On a searing cold and wind-swept night where the consistent 15-20 mile-per-hour wind removed throwing the ball from the equation, Bishop McDevitt was forced to manufacture a victory to claim its 15th District 3 title 7-0 over Lampeter-Strasburg in the Class 4A championship Friday night.

This game literally came down to McDevitt’s defense getting gashed on the edge at times but producing critical big play after big play to keep the Pioneers out of the end zone. Twice in the fourth quarter alone the Crusaders came up with huge fumble recoveries inside their own 20 while clinging to that 7-0 lead they grabbed late in the third quarter. McDevitt also had another red-zone fumble recovery, this one in the second quarter, that kept it 0-0 at halftime.

The Crusaders’ offensive line and the running back tandem of Marquese Williams and Cyncir Bowers was pushed to the limits in how much of the load they could carry in a game where passing was nearly impossible because of the sometimes howling wind and rock hard football. Every throw past 5 yards was a risky adventure all night. Williams and Bowers combined for 204 yards on 31 carries, including Williams’ 30-yard scamper for the only touchdown late in the third quarter.

The two quarterbacks, McDevitt’s Stone Saunders and Lampeter’s Berkeley Wagner, went a combined 9 of 24 for 75 yards with Saunders throwing the only interception in the first half when McDevitt faced third-and-goal from less than a yard. … Combined the Crusaders and Pioneers ran the ball 87 times for 360 yards. That’s only 4.1 yards per carry. Each defense was excellent all night. … McDevitt junior DT Riley Robell was a beast with three of the Crusaders’ five sacks and also had two tackles for loss and recovered a fumble. … Williams’ 30-yard touchdown run with 1:05 left in the third quarter was designed to go inside, but he saw an opening and cut outside, broke two tackles and sailed into the end zone. … McDevitt’s defense finished with five sacks, five tackles for loss and recovered three of the Pioneers’ five fumbles. McDevitt did not officially have a fumble, but three times the snap from center was off the mark and forced McDevitt to fall on the rock and live to fight another day. … Pioneers’ RB Giovanni Malatesta led all rushers with 135 yards on 25 carries.

McDevitt had to learn the hard way after that interception from inside the 1-yard line that passing was not an option in such extreme conditions. It didn’t matter whether you were against or with the howling wind. Getting the ball to travel close to anything that resembled normal was almost impossible. That forced the Crusaders to be extremely limited and one dimensional offensively and hope the defense could ride out the storm against an offense much better equipped to have success in those conditions.

Even ahead 7-0 late in the third quarter, the way the Pioneers were moving the ball the second and third quarters it felt like the Crusaders would need a second touchdown to win this game. One was enough for an opportunistic defense that simply made more big plays than any other unit on the field. 10 tackles behind the line of scrimmage (5 sacks and 5 TFLs) and three turnovers means the Crusaders’ high-powered offense was simply a spectator in the fourth quarter while the defense slammed the door shut.

“It was a tough night for passing. We faced adversity, but we couldn’t get mad at ourselves. We just had to remain positive. We’re used to having high scoring games. It was a great team win.” — Bishop McDevitt RB Marquese Williams
“The defense has always been there. We’ve been stride for stride with the offense all season. The offense gets all that shine by putting all those points on the board. Tonight when we hit that battle, and the offense has to struggle to get their points, the defense shined and that’s what really showed tonight. The cream rises to the top. Tonight we faced the adversity and everybody realized what we had to do. ” – Bishop McDevitt DT Riley Robell