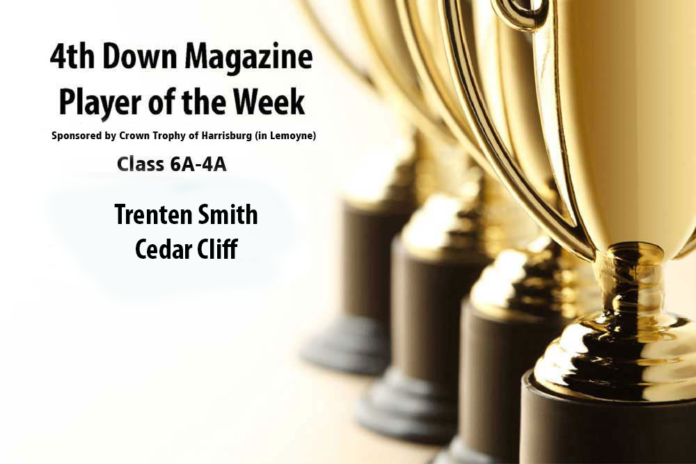 Trenten Smith is this week’s 4th Down Big School Player of the Week after one of his best performances of his career.

During Cedar Cliff’s 42-35 loss to Exeter Township in the District 3 Class 5A semifinals Friday, Smith posted numbers only bested by his Week 1 performance. Smith caught eight passes over the weekend for 137 yards and two touchdowns (13 and 24 yards). In Week 1 he went for 171 yards and two TDs on seven receptions against Red Lion.

Smith’s performance Friday kept the Colts in a tight playoff game. He was quarterback Ethan Dorrell’s top target after the QB threw for 225 yards, four touchdowns and an interception on 17-of-27 passing.

His senior season came to an end with 59 receptions for 947 yards (16.1 yards per catch) and eight TDs. He also rushed 16 times for 263 yards (16.4 yards per rush) and a TD. He had five games of 100 or more receiving yards this season. Defensively, he finished with 29 tackles, two interceptions and a forced fumble.