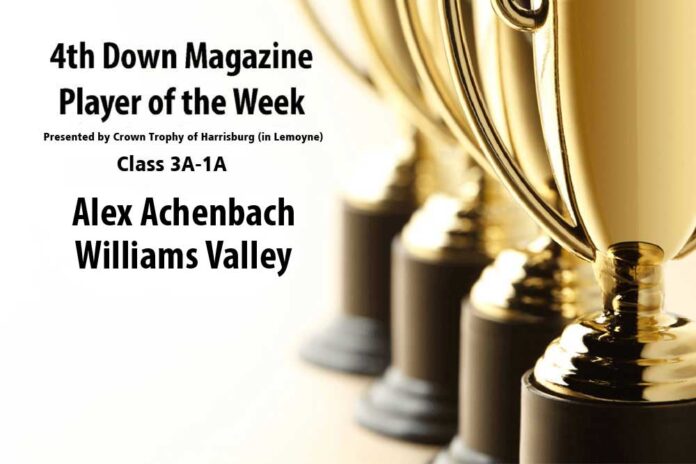 It took just 10 games into his varsity career for Alex Achenbach to have his breakout game.

The sophomore at Williams Valley already had a few hundred-yard games in his back pocket from his freshman campaign, but Friday’s dismantling of Pine Grove was his official statement game.

The 5-foot-10 running back sliced up Cardinals for 241 yards and two scores on just 29 carries, eclipsing his previous career high for yards in a game by nearly 90 stripes. Not bad.

The career outing convinced Vikings fans to come out in droves to vote for their guy. Achenbach picked up 1,696 votes to win our Week 2 Small School Player of the Week poll. It was a heated battle with Boiling Springs FB/LB Aiden Metzger, who lost by a hair (1,634 votes) in the POTW poll for schools in Classes 1A through 3A. Achenbach’s 39% of the vote edged Metzger and popped everyone else, with Tri-Valley WR Layne Yoder finishing with 454 votes.

The Vikings (2-0) and their young back host Colonial-Schuylkill foe Schuylkill Haven (1-1) in Friday’s Week 3 clash. Achenbach, who already has 50 carries and 334 yards, is in good shape to possibly reach 500 yards just three games into the season.