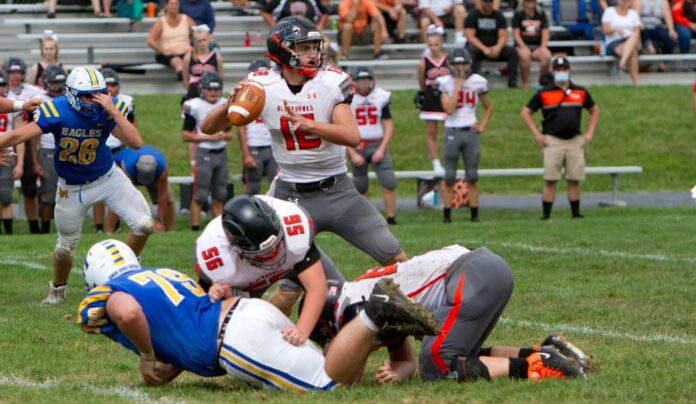 Result worth the wait for ‘Nita

Forced to wait an extra week to make its 2021 debut — the presence of COVID-19 put everything on hold — Susquenita turned that antsy extra week of preparation into a 22-3 victory Monday at Line Mountain. Louie Frisenda rushed for 117 yards and one touchdown, then set up a second score after the break with a tough-minded 36-yard burst that featured several broken tackles.

And while Derek Gibney’s 10-yard pass to his twin brother, Drew, was set up by Frisenda’s burst, the Blackhawks also picked up a safety and closed out Augie Glass’ first victory as coach on Mason Figard’s late 52-yard interception return.

Although the Blackhawks managed just 173 total yards of offense, Susquenita’s defense limited Line Mountain (0-2, 0-2) to a mere 80 yards while forcing three turnovers. “I’m happy they fought,” Glass said. “They stayed in it. We had some mistakes, but we didn’t have many penalties (5-for-35). I was worried about penalties. We kept fighting. I knew it was going to be a dog fight.”

Glass also lauded the Blackhawks’ special teams, which won the field-position phase of the game and also converted a fourth-and-long when Derek Gibney faked a punt and found his brother for a 25-yard gain. “Our special teams were awesome,” said Glass, who was soaked by his giddy players following the road victory. Although Line Mountain’s only points came on a Brayden Boyer field goal — for the second week in a row — the Eagles did get a combined 28 stops and four tackles for loss from omnipresent inside linebackers Beau Keim and Chandon Maurer.

Only Juniata sitting 2-0 in division play

Behind another sparkling defensive effort, Juniata (2-0, 2-0) remained perfect Saturday night with a 20-0 shutout at Upper Dauphin (1-1, 1-1). The host Trojans were in the red zone twice in the fourth quarter, reaching the Juniata 17 on one possession and later advancing to the Indians’ 8.

Three straight incompletions ended the first thrust — G.G. Ortiz nearly intercepted the final pass attempt — but the second came to a close when UD QB Wil Laskowski was thrown to the turf, fumbled and Trent Kauffman recovered the ball. As a result, Kurt Condo’s squad will lug a scoreless string of 94-plus minutes into its Week 3 scrap at West Perry.

“The defense has been strong this year and we plan to keep pushing,” said defensive lineman Jon Kauffman, who collected four of Juniata’s five sacks. Jacob Condo, Ortiz and Zach Harr rushed for touchdowns to give the Indians all the points they needed. “A win’s a win,” Kurt Condo said. “We’ll take it.”

Although Juniata has a date with host West Perry (1-1) on its Week 3 agenda, everyone else is scheduled to match up with Mid-Penn Capital foes. Susquenita, James Buchanan, Upper Dauphin, Halifax and Line Mountain will play at home against Camp Hill, Boiling Springs, Trinity, Big Spring and Middletown, respectively. On Saturday, however, Newport will visit Steel-High. What makes things more difficult — whether home or on the road — is Camp Hill (2-0), Boiling Springs (2-0), Trinity (1-0) and Steel-High (2-0) sport perfect marks.