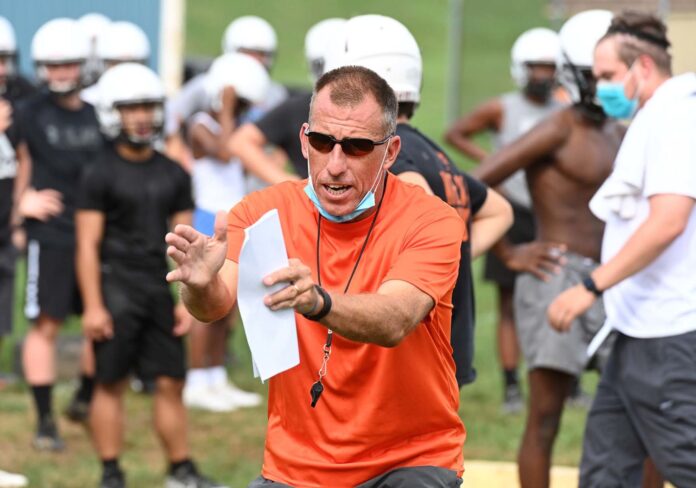 Outlook: A new division, a new coach and a pandemic. No sweat, right? Denniston wishes. In steps a longtime assistant at Central Dauphin, replacing the Panthers’ longtime head coach, Todd Stuter, as East Penn slides from the Capital to the Colonial. None of this is to say the Panthers, a notoriously tough team for years, will be a pushover. They most certainly won’t. But this is a young group trying to acclimate to a new system.

It’s a good group to make this kind of leap in 2020, though, Denniston believes. He’ll have a few years with the same linemen, and he inherits Jacob Shermeyer, and tireless two-way player who is aiming to crack 2,000 yards for his career.

1. If there’s one thing to their advantage … It’s fitness. Like every other team, the Panthers lost valuable time in the weightroom this offseason due to the shutdown. But new head coach John Denniston said he had his players focus on “fitness, plyometric strength.” It may not translate to record numbers on the bench press, but Denniston feels the group won’t be too far behind the 8-ball. “As I look at it from 10,000 feet,” Denniston said, “I’m actually really content with what we have. I think we have a nice blend of size up front and we’ve got some playmakers. Now, we’ve got some unproven playmakers, but the challenge we have as coaches everyday is [to make them successful].”

2. Bringing a CD mentality: Denniston arrives after spending years in the Central Dauphin program, where he was tasked with integrating the middle school program with the high school. “I put a really nice model together there,” he said. Now, Panthers fans shouldn’t expect the team will become the Rams, one of the Mid-Penn’s most dominant teams, especially overnight. They are two very different schools. But he’s bringing over an emphasis on athletic, powerful, suffocating defense and incorporating it with East Penn’s established 4-4 formation, one in which defensive coordinator Joe Shermeyer is sticking around to lead. Denniston is a Trinity grad who went on to play football at Duquesne in the 1980s, so he has years of experience in the Mid-Penn but also has that D-I college pedigree.

3. Jacob’s ladder to climb: Denniston also inherits a talented two-way player in Jacob Shermeyer, a running back/linebacker who has been with the program all four years. Two years ago, Shermeyer was one of the backs that attempted to replace Temple-bound Onasis Neely, one of the top backs in the state before his graduation. Shermeyer has put up a pair of 500-yard seasons since in the midst of the Panthers’ retooling. “Jacob’s definitely the leader of the team. He’s a three-year starter, four-year letter winner, terrific young man,” Denniston said. “High expectations for him. He’s run behind some very, very young lines the last couple of years.” Now he’s got one of the largest lines of his career to run behind, one that is 230-240 pounds across the board, his coach said. And the hope is with a new scheme and more experience, Shermeyer can explode with a big season. “We’re expecting a lot out of Jake,” Denniston said. “He’s very versatile, we can play him at any running back position, we can play him out of the slot, we can play him out wide.” Can’t forget his playmaking on defense last year, where he racked up 105 tackles, 14.5 TFLs, 1.5 sacks, caused two fumbles and picked off two passes.