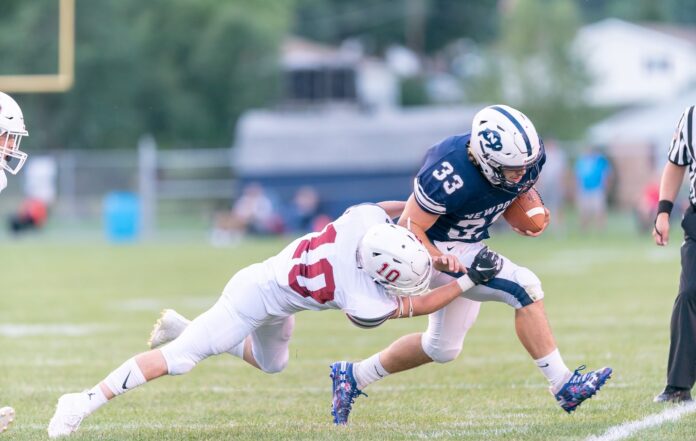 Following last weekend’s season-opening 36-20 reversal to an explosive Notre Dame-Green Pond side at home, Pine Grove (0-1) will dive into Schuylkill League play Friday night at perennial hammer North Schuylkill (1-0). It’s the same North Schuylkill program that brought an end to the Cardinals’ 2019 campaign in the opening round of the District 11 Class 3A playoffs, as Frank Gaffney’s club tumbled 42-20 at North Schuylkill. And while Pine Grove was in at halftime in last season’s finale — North Schuylkill opened it up after the break — the Cardinals trailed NDGP 22-20 in the third quarter following Josh Leininger’s 10-yard touchdown run. Unfortunately for the Cards, the two-point try after Leininger’s score was turned aside by the visiting Crusaders. NDGP, which piled up 456 yards of offense, went on to open things up by tacking on two more touchdowns.

Matt Frauen rushed for 166 yards and 3 TDs for NDGP, while quarterback Collin Quintano completed 23 of his 33 pass attempts for 208 yards and two more scores. Brody Robinson had Pine Grove in front on a 15-yard touchdown run, but NDGP rattled off three scores and took a 22-8 lead at the break. While Shea Morgan’s 93-yard return of the second-half kickoff reignited the Cards and Leininger’s TD scamper had them within two, they never could pull even. Robinson finished with 92 yards on 13 attempts, while Leininger tacked on 70 yards on 12 tries. Leininger completed 8 of his 18 throws for 66 yards (2 interceptions), but was really impressive defensively, matching a single-game record by totaling 19 tackles. North Schuylkill encountered little resistance in its opener, handing veteran skipper Wally Hall his 100th victory following a 50-21 pasting of host Mahanoy Area. Jake Hall tossed four first-half touchdown passes for the Spartans, who were sitting on a 44-14 cushion at the halftime break.

Delayed Williams Valley will get going … in a hurry

On pause for the better part of a week courtesy of a COVID-19 flare-up, Williams Valley (10-3 in 2019) will have a bang-bang start to its 2020 campaign by playing twice in five days. While Tim Savage’s Vikings will entertain Shenandoah Valley (0-1) Friday night at The Stauff, the reigning District 11-1A champions will turn right around and visit Mount Carmel’s Silver Bowl on Tuesday night. With QB Bryce Herb, TE Jesse Engle and an experienced offensive front returning, the biggest question marks for Savage’s club are: (1) Who will carry the football and (2) just which untested wide receiver will Herb opt to target. Shenandoah Valley qualified for the District 11 playoffs a season ago, but low numbers caused the Blue Devils to close down early and forfeit games near the end of the season. Shenandoah Valley struggled in its opener, falling 49-7 to a rebuilt Tamaqua outfit that last season claimed District 11’s 3A crown. Mount Carmel (10-3 in 2019) had its own COVID-19 delay, so John Darrah’s Red Tornadoes will be taking the field for the first time when the Vikes venture to southeastern Northumberland County.

Darrah’s Tornadoes, whose three 2019 losses were handed to them by Southern Columbia, North Schuylkill and Southern Columbia, were hit hard by graduation. Yet the expectations always run sky-high in Mount Carmel, where the Tornadoes have captured a handful of state championships. They’ve also piled up a state-record 866 victories. Darrah, who grew up in Mount Carmel and played on two state championship teams, also has familiarity with Williams Valley since he served as Tri-Valley’s D-coordinator for five seasons, including the Bulldogs’ daring run to the 2009 PIAA Class A semis.