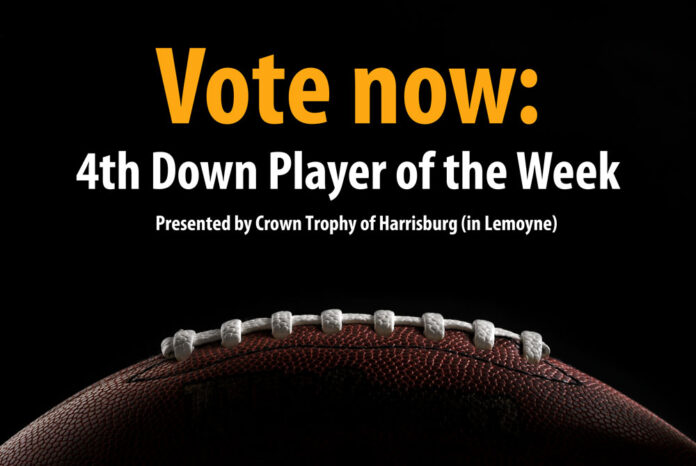 Welcome to 4th Down Magazine’s vote for Players of the Week presented by Crown Trophy of Harrisburg (in Lemoyne).

The nominees for the week are listed below. Vote for the players in each category with the most impressive performance.

Erby Weller, jr., WR/DB, Shippensburg — When was the last time you saw a receiver catch every pass a quarterback makes? That’s what Weller did Friday night in a 47-20 win over Dover. The wideout caught all seven passes QB Tucker Chamberlin completed (out of nine attempts) and finished with 204 yards and four touchdowns in the blowout for the 3-0 Greyhounds.

Logan Schmidt, sr., RB/DB, Big Spring — Schmidt scored two different ways in the Bulldogs’ blowout 63-13 win over Halifax, punching in a 1-yard run just 1:30 before he took an interception to the house. His pick-6 was one of two (the other by Zachary Mell) for Big Spring in this one, both coming in the second half. Schmidt finished with a game-high five carries for 82 yards on the ground.

Jeffrey Lougee, so., QB, Mechanicsburg — Yardage was not provided in this one, but the young Duke baseball commit was surely all over the box score. Lougee led an impressive comeback effort against a Red Land squad that suffered another heartbreaking loss, scoring three straight rushing touchdowns in the second half in a 27-17 victory that erased a 14-0 deficit. Lougee scored on trots of 27, 30 and 70 yards.

Terrence Jackson-Copney, jr., QB, CD East — Making his first start and second appearance in a row since Anthony Powell’s injury last week, Jackson-Copney did nothing more than lead the Panthers in an upset 20-7 win over previously unbeaten Cedar Cliff. The junior went for 94 yards passing and added another 141 stripes and a touchdown on the ground.

Griffin Huffman, jr., WR/DB, Cumberland Valley — What a rollercoaster for the young receiver and place kick holder. Huffman snared a 41-yard TD during Friday’s game against Spring-Ford. But that was nothing compared to his dramatics on the game’s final play. Huffman muffed the hold on a potential game-winning field goal attempt with the Eagles trailing 19-17. But he had the awareness, and the speed, to turn and run to the end zone to steal victory from the jaws of defeat, handing CV its first win of the year 23-19 and stunning Spring-Ford.

Mahkai Hopkins, jr., RB/K, Harrisburg — Hopkins came up clutch in an entertaining 20-17 win over Manheim Township, a matchup that was thrown together in less than two days due to previous COVID-19 cancelations by the two teams’ previous opponents. Hopkins ripped off 141 yards on 21 carries and scored twice, including a 1-yarder in the third quarter to take a 14-7 lead. But it was his 1-yard plunge on fourth down in OT that produced the winning points. He also added two PATs.

Sy Burgos, sr., RB/DB, East Pennsboro — The Panthers’ dynamic back returned after a one-week absence to rush for 84 yards on 17 carries. And his 88-yard kick return touchdown briefly equalized the Panthers’ contest at 7-7 in the first quarter. East Penn trailed 20-7 in the second quarter but turned the game around and beat Milton Hershey 30-26 with a last-minute touchdown from Devin Shepherd.

Jake Kauffman, sr., RB/LB, Lower Dauphin — Kauffman pushed the Falcons to their second win in two years, rushing 10 times for 151 yards and two scores, including a long run of 76 yards, to lead LD (1-1) past Elizabethtown 32-12.

Mikel Holden, jr., RB, Waynesboro — What a shootout between Waynesboro and Gettysburg. ‘Boro came out on top 55-49 and needed every last one of Holden’s five touchdown runs to pull it off. The junior rushed 17 times — meaning nearly one in three touches went for pay dirt — and 85 yards as part of a rushing attack that racked up 266 stripes and six scores on 43 attempts. Plus he caught three passes for 35 yards.

Jonas McGrath, sr., QB, Tri-Valley — McGrath played a lead role in the Bulldogs’ 34-0 conquest of Pine Grove in a Colonial-Schuylkill crossover. McGrath tossed first-half touchdown passes to Jake Tietsworth and Levi Murray that covered 17 and 16 yards, respectively, as Jeff Sampson’s crew (3-0) motored to a 21-0 lead. McGrath added yet another scoring pass after the break, hooking up with slick sophomore Layne Yoder for a 46-yard TD.

Alex Achenbach, so., RB, Williams Valley — 4th Down Magazine’s reigning Small School Player of the Week, Achenbach was at it again Friday night as he rushed 17 times for 165 yards and two scores in Williams Valley’s 38-8 thumping of Schuylkill Haven. Achenbach also played a role in the Vikings’ passing game, as he caught a 48-yard touchdown pass from Isaac Whiteash (who threw three) that allowed Tim Savage’s unbeaten crew (3-0) to ease to victory in the Colonial-Schuylkill crossover.

Derek Gibney, so., QB, Susquenita — Riding his powerful right arm and nimble legs, Gibney’s efforts helped Augie Glass’ Blackhawks (2-0) rally past Camp Hill 39-34 and claim their second victory in less than a week. Gibney completed 10 of his 22 pass attempts for 163 yards and two touchdowns, a 10-yarder to his twin brother, Drew, and a 27-yarder to Blaise Swancer on the final play of the first half. Derek Gibney also rushed for 108 yards on 11 carries and touchdowns covering 1 and 36 yards. Gibney also passed for a two-point conversion and ran for a second.

Audric Bryant, sr., RB, Middletown — Remarkably quick and mighty elusive when the football is in his hands, the diminutive Bryant flashed his cutback ability repeatedly as the Blue Raiders downed Line Mountain 28-6 in a Mid-Penn crossover. Bryant carried the ball 17 times for 136 yards, finding a seam in the second quarter that allowed him to zip 23 yards for Middletown’s second score. Bryant also caught two passes for 39 yards as the Blue Raiders (1-1) evened their early-season mark.

Christian Doi, sr., RB, Camp Hill — The Lions were handed their first loss by Derek Gibney and Susquenita, and Doi was held to just 1 rushing yard on a single carry, but he hauled in five passes for 164 yards in a quality back-and-forth Mid-Penn crossover game. Doi connected with Peyton Shore (14-of-29, 340 yards, three TDs, one rushing TD, INT) twice for 62- and 74-yard scoring strikes in the first half.

Alex Erby, so., QB, Steel-High — The Rollers keep rolling. Erby wasn’t challenged much in a  68-7 dismantling of Newport to push Steel-High to 3-0 this season. The electric signal caller finished a tidy 12-of-14 through the air (he rushed twice for 8 yards) for 328 yards (an incredible average per attempt of 23.4 yards) and five TDs to four different receivers covering 23, 11, 8, 74 and 44 yards. He also added a 14-yard scoring trot. His fifth TD pass made him Steel-High’s all-time leader with 49 for his career, one more than Jere’l Lewis, in just 13 games.