The Champs!: Steel-High’s defense shuts down Jeannette to claim the PIAA Class 1A title, 32-20 at Hersheypark Stadium 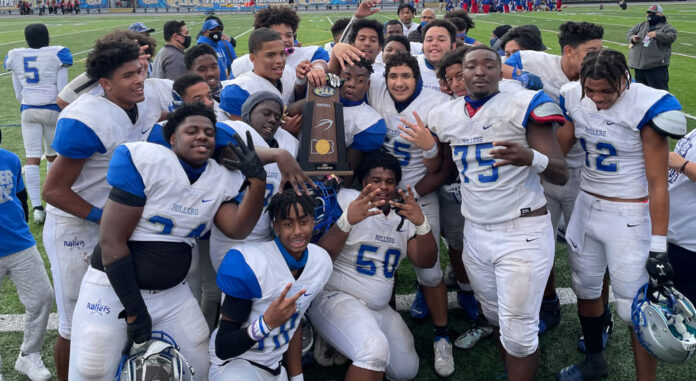 An old-school formula of running the ball and defense carried Steel-High to its first PIAA championship since 2008.

A pair of pick-6 touchdowns in the fourth quarter by Rollers defensive backs Daivin Pryor and Damein Hammonds proved the difference on the scoreboard as Steel-High pulled away from the Jayhawks to post a 32-20 PIAA Class 1A title-game victory.

“This is the best feeling ever, the best feeling,” said Steel-High star wideout Mehki Flowers. “To come off seasons where we had a lot of losses to get here and win is really special.”

In a game with nine total turnovers — five for the Rollers and four for the Jayhawks — it was the two interceptions in the fourth quarter that proved to be the difference between these two high-powered offenses.

With Steel-High nursing a 17-14 lead in the fourth quarter, Jeannette was on the move. Facing a fourth-and-3 at the Rollers’ 28, Jayhawks QB Roberto Smith Sr. threw a rifle into the flat that Pryor, who finished with 10 tackles, snared and went 79 yards the other way to make it 24-14.

The Rollers were seemingly putting the game on ice before running back Odell Greene, who finished with a game-high 195 yards on 35 carries, fumbled at the Jayhawks 25 with 3:04 to play.

“Both teams took shots and hit some, and both turned the ball over,” Steel-High coach Alex Erby said. “At the end of the day, the last few weeks we have found ways to win and that’s made it a real special run.”

Jeannette moved from its own 25 to the Steel-High 26-yard line with less than 90 seconds to play.

Smith threw another out pass that went through receiver Brett Birch’s  hands, and Hammonds made a one-handed grab of the deflection in tight space and raced 72 yards to the end zone for the clinching score.

“I saw green. To be honest, we had to make a business decision and get up on our man and give them as little breathing room as possible,” said Hammonds, who also had 11 receptions for 75 yards on offense. “We stepped up and made big-time plays in a big-time game.”

The pick-6 touchdowns stole the show, but the grind by the Rollers’ defensive front and linebackers was a difference maker in this game. Jeannette had only 21 yards rushing and was forced to throw to move the ball — finishing with 382 yards passing.

“Our offense has been one of our best assets all season,” Flowers said. “For our defense to come out here and get a couple pick-sixes and four interceptions says a lot.”

Balance by the Rollers offensively also played a huge part in a game that was tied 14-all at halftime and was 17-14 heading into the fourth quarter. Steel-High had 209 yards on the ground, and freshman QB Alex Erby threw for 183 yards.

“The recipe I learned from coach Rob Deibler, you have to run the ball and stop the run late to win championships,” coach Erby said. “I was around those teams he coached. You can’t throw it around all the time, and Odell running the ball behind our line has been a difference the last couple of weeks.”