Making the Grade: A position-by-position breakdown of Steel-High’s 32-20 victory against Jeannette in the PIAA Class 1A championship 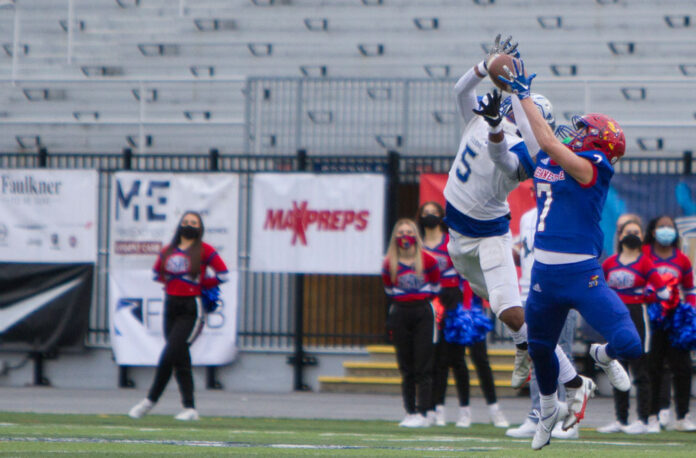 When Steel-High gets to a PIAA championship game in Hershey, the Rollers have enjoyed recent success with titles in 2007, 2008 and now 2020.

This game was in the balance in the fourth quarter and turnovers played a huge role, two pick-sixes covering 151 total yards five minutes apart, but so did running the ball to wind the clock and a run defense that was solid all game.

Jeannette was forced to be one dimensional by a Steel-High defensive front and linebackers that surrendered very little in the running game.

And the 195 yards rushing from Odell Greene on 35 carries can’t be overlooked in terms of its value. With athletes and playmakers all over the field, it was the Rollers’ defense that sealed a perfect season and the state title.

Quarterback: I’m grading this with a curve because the injury to sensational freshman quarterback Brad Birch, who was on crutches, robbed this game of a great freshman QB matchup. Roberto Smith Sr. is a huge weapon, but was forced to play quarterback. He threw for nearly 400 yards, but couldn’t get anything in the running game. He threw four interceptions including a pair of fourth-quarter pick-sixes. I didn’t think either throw was bad. The second one went off the hands of his receiver. For a back-up forced to play he was well above average. Grade: B

Running Back: Smith was the best option running the ball. He had 19 of the Jayhawks’ 25 total carries for only 32 yards. They wanted to run but couldn’t. I can just imagine what he could do without having to be the QB at his normal RB positoin. Grade: C

Wide Receivers: The Jayhawks had three hammers at wideout and pushed the Rollers like nobody this season. Senior Toby Cline is fast, tough and not easy to bring down at 5-9. He had seven grabs for 149 yards. Brett Birch and James Sanders each had a touchdown and combined for 11 grabs, 210 yards. This group was the best trio I’ve seen all season. Grade: A+

Offensive Line: I was surprised a little how much they struggled to create any space or clean holes in the run game and it became a problem as the game wore on. Their pass protection was spectacular and their interior blocking on those bubble screens was on point, too. Grade: B-

Defensive Line: It was tough sledding for this group against an offense that is balanced and stretches this group. Posted three sacks and didn’t make it easy to run the ball. Rollers had 200-plus yards rushing, but that wasn’t the DL falling apart. Grade: B-

Linebackers: Sophomore Elijah Binakonsky and classmate Jaishaun Jamison each had eight tackles to lead the Jayhawks. Biggest problem was in the fourth quarter they were getting gashed on the second level in the run game. Grade: C+

Secondary: It’s the same dudes who play wide receiver, Sanders, Cline and Birch, and they were fabulous. Sanders is only 5-9 and covered Flowers like a glove despite giving away four inches. The Rollers’ deep passing game didn’t hit once. Grade: A

Special Teams: Cline also punted and he flipped the field two or three times that made a huge difference. He finished the day averaging 48 yards on five punts. Those are college numbers. And the roll counts in high school, right? Smith missed a short field and extra point and that came into play. Coverage unit on kickoffs was very good. Grade: B+

Quarterback: The Rollers took their shots early and they didn’t hit. Late in the first half, they changed up and took what the defense was giving them in the shorter passing game and Alex Erby was extremely effective and efficient. He finished with 183 yards, completed 16 of 23 passes with two interceptions and a touchdown. Solid numbers. Grade: B

Running Back: For the second week in a row, Odell Greene was a beast inside but never shook loose for a big one. The offense settled down and was more efficient once Greene became the focal point. He rumbled and battled for 195 yards on 35 carries with a touchdown. Steel-High doesn’t win a state title without him. Grade: A+

Wide Receivers: On the first play of the game Mehki Flowers re-injured his aggravated ankle and had to hobble his way through this one. That 50-yard catch-and-run was all he could do but it was still a great play. Hammonds caught everything thrown his way to finish with 11 grabs for 75 yards. Grade: A

Offensive Line: Early on it was a struggle for this group, but once they found their footing late in the first quarter they became a huge key. Thryi Duncan and Tydre Holland-Ali were the best of the group. More than 200 yards on the ground is always means the OL did its job. Grade: A-

Defensive Line: For the second straight week the quartet of — Tydree Holland-Ali, Andrew Erby Jr., Eugene Green and Kyler Raye-Williams — played a monster role in the Rollers celebrating after the final whistle. Green had 5.5 tackles, 3.5 tackles for a loss, one sack and forced a fumble. He’s a freshman and couldn’t be blocked. Grade: A+

Linebackers: Jaeion Perry and Amari Williams are only freshmen and finished first and third in tackles for the Rollers. Perry led the Rollers with 9.5 tackles, including eight solo stops and Williams had six solo tackles. They were a forced inside and outside all game. Grade: A+

Secondary: So you give up nearly 400 yards passing, but at the same time you come up with four interceptions including a pair of pick-sixes in the fourth quarter. Junior Daivin Pryor was the target of the Jayhawks and he gave up some big play. But he also had a pick-six and made nine tackles. He was the unsung hero of this group. Grade: A-

Special Teams: Once again Bryan Hernandez played a big role with a field goal to give the Rollers a 17-14 lead heading into the fourth quarter. Punt return coverage was excellent and the kickoff coverage was above board. All punts were allowed to hit the ground and was a mystery why. Gave up a lot of yards. Grade: B