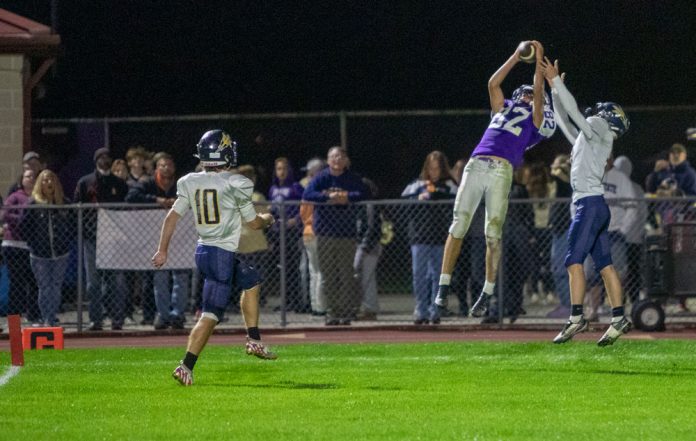 What an interesting Week 6 in the Mid-Penn Conference.

There were a couple of surprising results for traditionally strong programs that have navigated some choppy waters recently. Mechanicsburg picked up its second win in three games after an 0-3 start by edging previously one-loss East Pennsboro by a field goal in a game that featured 17 total points. And how about Susquehanna Township not only beating Waynesboro but posting a shutout to improve to 3-3 overall?

It has been a rough ride this season for Central Dauphin, a powerhouse program. This is not unexpected, but you can see this team adding building blocks. It continued against Carlisle Thursday night. The Rams gave State College a full test the previous week and came out and played at the same level, thrashing the Thundering Herd by four touchdowns. That was not expected.

Week 6 was more about the individual performances, and they were massive in terms of production. It was what stood out more than anything around the Mid-Penn Conference.

Let’s start with Hershey senior wide receiver and kick returner Marcus Sweeney. The Trojans won their third in a row after starting 0-3 by overpowering Red Land by 20. Sweeney had three touchdowns, each scored in a different manner and covering more than 85 yards. He had a 91-yard kickoff return, a 94-yard catch-and-run receiving touchdown and took a handoff and galloped 86 yards for another score.

In a wild Liberty Division contest Line Mountain used a blocked extra point in overtime to hold off Newport 24-23. This game was all about a couple running backs — Ian Bates from Line Mountain and Newport’s Aiden Dishman. The duo combined for 511 yards and five touchdowns on 53 carries. That’s a ridiculous 9.6 yards per carry. Bates had 280 yards on 34 totes, and Dishman went for 231 on only 19 carries with three scores.

Harrisburg struggled at times in the first half of the season, but this assemblance of talent is starting to find its groove. The Cougars went on the road to Mansion Park and thrashed a one-loss Altoona squad 48-zip. Quarterback Shawn Lee completed only nine passes, but five of those went for touchdowns as he finished with 289 yards passing. That’s an average of 32.1 yards per completion. Don’t forget about the shutout, either.

Bishop McDevitt needed only a half to post 68 points against Milton Hershey. The Crusaders unleashed the full arsenal, as well. QB Stone Saunders threw for 360 yards and six touchdowns, averaging a not-often-seen 14.1 yards per pass attempt. Running back Marquese Williams showed why he’s an FBS-level recruit by eclipsing 100 yards rushing and receiving with four total touchdowns on 15 touches. His average was a tidy 14.1 yards per touch.

West Perry remains unbeaten, and for the second straight week this high-powered Mustangs offense cleared the 50-point barrier in a victory over Boiling Springs. Quarterback Marcus Quaker accounted for six Mustangs touchdowns (four rushing, two passing) and cleared 100 yards on the ground. Running back Tren Herrera didn’t find the end zone — that was Quaker’s duty on this night — but he did roll up 154 yards rushing on 18 totes.

Gettysburg stayed unbeaten against Mid-Penn Conference opponents in its first season back in the conference after an eight-year hiatus in the YAIAA. The Warriors, who fell to New Oxford in Week 2, knocked Shippensburg out of contention for the Colonial Division title by edging the Greyhounds 17-14. Once again it was running back Jayden Johnson doing the heavy lifting for Gettysburg, compiling 157 yards on 20 carries.

The Warriors control their own destiny in the Crazy Colonial with a perfect 3-0 mark and a rocky road to navigate ahead. They look well equipped to tackle it. Northern and Mechanicsburg are 2-1 in the Colonial and everybody else is 1-2 in the division. This is going to be fun to watch unfold.

Speaking of Northern, the Polar Bears continued their up-and-down ride by coming from behind to overtake Greencastle-Antrim 28-18 and hand the Blue Devils their second consecutive loss after a 4-0 start. Northern RB Cole Bartram had 175 yards and three touchdowns to power Da Polar Bears.

Lower Dauphin is 4-2 overall and for the second consecutive week cleared 40 points and thrashed the opposition — this time it was Palmyra. Falcons RB Ty Millhimes fell 2 yards short of a 200-yard outing with three touchdowns and also threw a 71-yard touchdown pass. Are the Falcons a playoff team? Cedar Cliff, Hershey and Bishop McDevitt are still on the docket for LD.

Speaking of Cedar Cliff, the Colts snapped a two-game slide and climbed back to .500 overall by doubling up Mifflin County. Don’t sleep on this team. They could still be a six- or maybe even seven-win squad this season. This team will go as far as the defense carries it.

Camp Hill survived against Susquenita, posting a 10-7 victory. The Lions have scored only two touchdowns the last eight quarters. That has to change with Trinity and West Perry still to come.

Those Shamrocks from Trinity are finding their identity with back-to-back wins to get back to .500 overall. Three more interceptions against Big Spring, two from Max Schlager, gives the T-Rocks 12 picks on the season. The attacking defensive style is starting to work. Schlager is so key to this team. He also had nearly 100 rushing yards and a couple touchdowns.