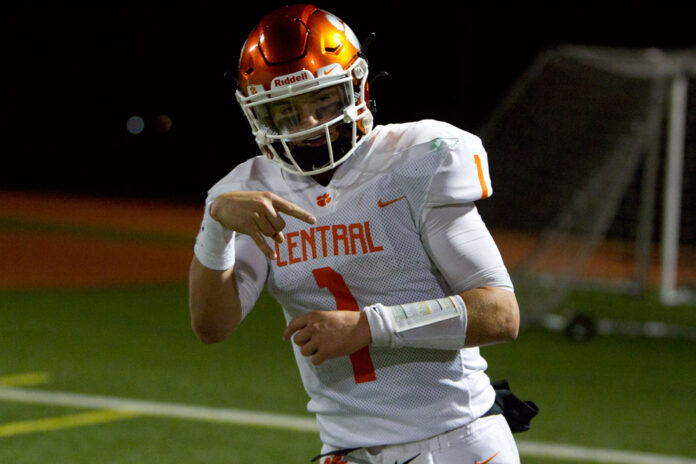 Dating back to 1985 when postseason playoffs at the District 3 level were woven into the fabric of high school football in Central Pennsylvania, teams from York County have very rarely had a say in the top classification.

Overall a team from York County has never won a District 3 title in the largest classification, whether that was Class 4A for decades or more recently, starting in 2016, in Class 6A. Zero titles.

York County is guaranteed District 3 title No. 1 in 2020 because Central York drubbed defending champion Central Dauphin 42-15 Friday night. The Panthers will host William Penn (York High) in the title game. The Bearcats reached the final via a forfeit by Harrisburg after the Cougars had a COVID-19 issue announced hours after the playoff brackets were finalized.

When you look at all classifications historically, York County has won only nine District 3 championships and No. 10 overall is guaranteed. The Panthers, led by Penn State recruit Beau Pribula at quarterback, have the offense and secondary to make some noise going forward. If they execute anywhere near the same level as they did Friday night at The Speedway, it could be an interesting month in new territory for a York County team.

Congratulations to the Juniata Indians out of the newly formed MPC Liberty Division for claiming the District 6 Class 4A championship with a 24-21 victory over Bellefonte. QB Jacob Condo had a pair of TD passes and accounted for 165 yards (103 rushing, 62 passing) in the victory. Nice job by the Indians defense, too. That was a huge key for Juniata – keeping the Red Raiders to three scores.

I look all over the web for information, but as best I can gather Northern did play its regulars Friday night against Waynesboro. The highlights I saw revealed Jordan Heisey was under center for the Polar Bears. Either way, playoff-bound Northern was upset by the Indians 22-0. The Waynesboro defense held the Polar Bears offense to only 78 total yards.

Carlisle running back Sean Smith followed up his school record 333-yard performance with a 158-yard, two touchdown second act in the Thundering Herd’s 21-0 victory over CD East. The senior carried 26 times and averaged 6.1 yards per carry to power Carlisle to a 3-2 overall record. The Panthers have struggled offensively this season and the Herd made sure that continued by picking off four passes and posting a shutout.

Timing is everything and it appears Middletown has found its groove and is playing its best football of the season heading into the District 3 Class 3A championship game with Wyomissing. A 34-point second-half explosion powered the Blue Raiders past Bermudian Springs 46-7. Tymir Jackson was a beast on the ground and holding the Eagles’ rushing offense to a touchdown is another good sign.

I was bummed to learn a match-up between a couple unbeatens, Bishop McDevitt and Hershey, was lost to COVID-19 issues. Neither club made the playoffs and that’s a tough pill to swallow. Was curious to see how the Trojans and Crusaders responded. Oh well … sigh!

Congratulations to Steel-High for claiming the District 3 Class 1A title with a 23-13 victory over Delone in McSherrystown. On a rainy and dreary night, the Rollers high-octane offense was grounded to leaning on its offensive line and running back Odell Greene. How about a staggering 42 carries for 158 yards and two touchdowns for Greene. That’s some serious grinding right there. The real key was Steel-High’s defense holding the Squires to fewer than 50 yards rushing and forcing three turnovers.

Micah Brubaker and that Mechanicsburg offense continue to carve up opponents on a weekly basis. This week it was 30 points before the third quarter was four minutes old against East Pennsboro. Brubakers finished with 334 total yards (243 passing, 91 rushing) and five total touchdowns (four passing, one rushing). The beat goes on.

Boiling Springs could not match-up defensively against the powerful Wyomissing Spartans on Saturday in Berks County and went down 47-7 in a District 3 Class 3A semifinal. Hey when you go 0-10 the year before and make the playoffs the next season, playoff results aren’t the measure of progress. Wyomissing is a very large football team for Class 3A. Big dudes!

My under-the-radar player this week goes to West Perry WR-RB Trent Herrera in a 33-22 setback to Susquehanna Township. Herrera had 202 total yards on 127 receiving yards and 75 yards on the ground with a touchdown receiving for the Mustangs. Big game that gave struggling West Perry a chance.