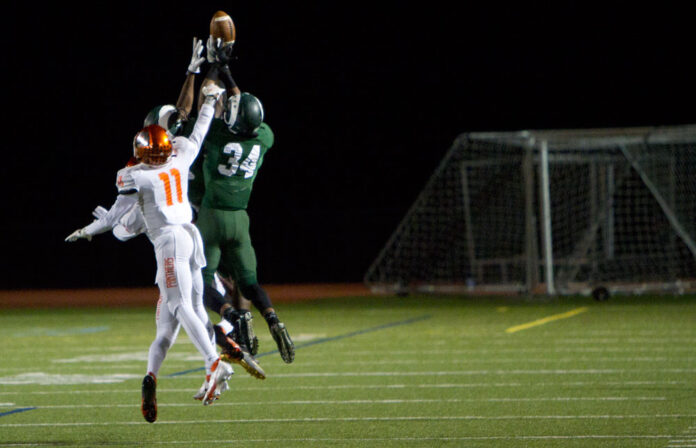 Final score in this District 3 Class 6A semifinal was Central York 42, Central Dauphin 15.

The biggest difference maker on the field and it showed up on the scoreboard was Penn State recruit Beau Pribula at quarterback for the Panthers. He was in a league all his own and the Rams were helpless to slow him down even a little bit.

Central Dauphin executed its game plan, hog the ball and keep that Panthers Air Raid offense on the sidelines. There was a stretch in the second quarter where the Rams ran 25 plays to a single snap for Central York. The problem was turnovers. Central Dauphin had two costly giveaways in the opening 24 minutes.

Two plays, a 40-yard catch-and-run by Judah Tomb and a 95-yard kickoff return by Tomb opened the Panthers’ lead from 13-9 to 27-9 in a hurry and took Central Dauphin completely out of its ground-and-pound gameplan.

The real shocker in this match-up, beyond the final score, was the Central Dauphin defense had zero impact on this game. There was some shaky tackling, sure, but overall the Rams defense could not and did not stop Central York’s offense. The turnovers by the Rams and big plays by the Panthers only accelerated what was always going to be a Central York triumph. It’s offense was that dominating.

Quarterback: It is very obvious why Penn State coach James Franklin was high on Beau Pribula. He’s athletic, has decent size at 6-3, 205 and has this field presence that college coaches cherish. And he is a legitimate dual threat. He “only” threw for 190 yards, but that’s because with a big lead Central York had to go out of character and slow the game down. No problem, Pribula simply ran the ball to the tune of 150 yards on 11 carries. And he had a hand in five touchdowns (three passing, two rushing). The Panthers offense averaged 8.3 yards per play against Central Dauphin. That’s impressive. Best player on the field by a mile. It was hard not to see that. Grade: A+

Running Back: Isaiah Sturgis runs hard and hits the hole with authority. He finished with only 44 yards on 16 carries, but most of his work was in between the tackles and came in the second half when the Panthers were trying to grind on the clock. And slamming inside against CD is no easy task. Grade: B

Wide Receivers: Judah Tomb is a ticking time bomb in this offense every game with Pribula dealing. He’s super fast and lethal in space. His first two catches went for 83 yards and a pair of touchdowns. They have three other wideouts as well and they all had a couple catches in space and did good work. But Tomb was the game changer.  Grade: A

Offensive Line: Safe to say this group hasn’t faced a defensive front and linebackers the caliber of Central Dauphin this season. And they did just fine. Pass blocking, their obvious strength, was very good particularly on blitzes and off the edge. Inside run blocking was a stalemate and when you do that against the Rams you had a good night. It was their downfield blocking that grabbed my attention. They got after it in the second level and performed. Grade: A-

Defensive Line: It was tough sledding in the first half against a very good Central Dauphin offensive line. You could see those orange helmets going backwards most of the first half. Once the Panthers went ahead by three scores, the pressure was off. Grade: B

Linebackers: Carter Glassmyer is only a junior and is already a guy that catches your eye. He was all over the field making tackles inside and outside. His work in space was particularly impressive. Jack Smith patrols the middle and that’s a tough ask against the Rams. He was up to the job and didn’t allow any of those 15-plus yard run on cutbacks by making tackles in some tight spots. He was very good in the first half. Nice grab by OLB Cole Luckenbaugh on that tipped ball for an INT. Grade: A-

Secondary: The strength of this defense with Taylor Wright-Rawls, Tomb, Jahmar Simpson and on this night they added Pribula to the mix. Their run support was outstanding and they knocked down a couple deep balls. I didn’t see anybody wide open. Grade: A

Special Teams: The kickoff coverage was pretty good for the most part minus one long return. There was that bad snap on the one extra point but it didn’t matter. Two offsides on field goal attempts could have cost them dearly, but it didn’t. And of course there was that 95-yard kickoff return by Tomb. Grade: B

Quarterback: The plan was a lot of running game and short passes to keep the Central York offense off the field. And Max Mosey executed that plan to perfection for a long time. The interception was a tipped ball at the line of scrimmage and a nice scoop by the Panthers. That happens. When forced to throw after the Rams fell behind by 18 points, the only option was to go deep. Not a strength for any QB when you know the other team knows it’s coming. Grade: B

Running Back: Timmy Smith and Shamarr Joppy combined for 176 yards on 31 carries. That’s solid work most nights. But each fumbled deep inside the red zone and those miscues hurt more than most in a game like this. Grade: B-

Wide Receivers: Malachi Bowman finished with 99 yards on five grabs and that was a nifty grab after a deflection for a 61-yard catch-and-run touchdown for the only CD points of the second half. Only two receivers made catches in a game the Rams trailed by 18 points very early in the second half. Grade: B-

Offensive Line: This group did their job. Central York defense is fast and physical and they moved guys off their spots and created running lanes. The Rams had 186 rushing yards on 36 carries in the first half. They were muted by the defense not being able to stop the Panthers..  Grade: A

Defensive Line: No pressure on the quarterback was a problem. They had to get pressure to make a difference and it never materialized. They were good in tight spaces as always. When it came to pass rush they were eliminated from the equation. Grade: C+

Linebackers: Not a good night for this group. Too many huge gaps in the middle of the field and on the edge those quick swing passes were wide open and good for 10-12 yards the minute the ball was snapped. The Panthers were a perfect 9-for-9 converting on third and fourth down. The yardage was irrelevant. Grade: C-

Secondary: Missed tackles in the open field, wide open receivers and the Central York quarterback had his way in open space using his legs. Deep balls were open and middle seam routes they were a step behind as well. Grade: C-

Special Teams: Neither team punted, which for a high school game is almost unheard of. Missed three sure tackles on that killer 95-yard kickoff return. Two guys had him at the 20-yard-line and failed to finish. Kick returns were hit-and-miss. Grade: D