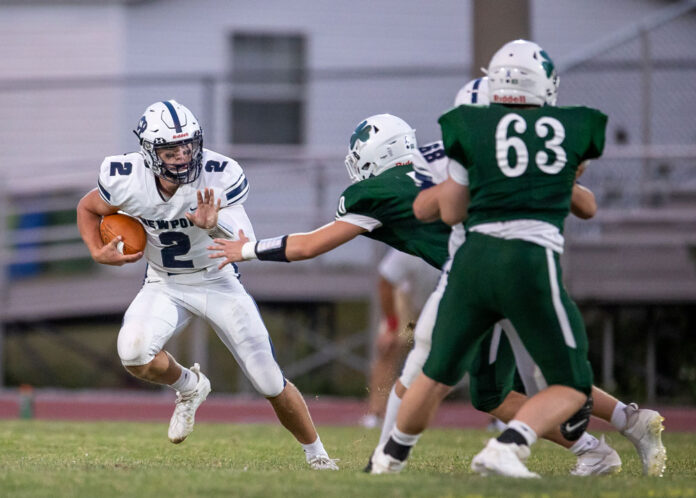 1. Newport, Susquenita to engage in one backyard scrap …: Strongly suggesting that his offensive attack needed to put the ball in the hands of new quarterback Andrew Bates, feature back Thomas Pyle and versatile wideout Mason Huggins, Todd Rothermel’s Newport Buffaloes carried out that plan last weekend while hanging a 21-17 setback on Trinity in a Mid-Penn crossover. Bates rushed 13 times for 83 yards and two touchdowns, including a 61-yard scamper for the Buffs (1-0). Pyle added a touchdown run, but Huggins caught three Bates tosses for 50 yards and enjoyed a terrific game on the defensive side of the football. In addition to making eight tackles, Huggins swiped three passes and knocked down three others. Up next for the Buffs will be a short road trip to neighboring Susquenita (0-1), which last weekend left with a 51-13 loss to a Boiling Springs side featuring a huge offensive front. Austin Kenny rushed 15 times for Scott Acri’s Blackhawks, gaining 85 yards and scoring once. Kenny also caught one pass for 31 yards from freshman quarterback Derek Gibney (5-for-11 for 89 yards, 2 picks). Acri’s Blackhawks also picked up a 30-yard touchdown run from Laiken Miller, who also totaled 34 receiving yards on a pair of catches.

2. … while Line Mountain and Upper Dauphin engage in another: Despite a sizable edge in time of possession — Line Mountain ran off 70 offensive plays to Camp Hill’s 38 — Brandon Carson’s Eagles (0-1) made the return trip to Mandata lugging a 35-28 setback. Quarterback Jacob Feese racked up 138 rushing yards and two touchdowns on 26 carries, but also banked 102 passing yards on an 8-for-17 performance through the air. Feese uncorked a pair of first-half darts that could have resulted in big plays, but one was dropped and the other was waved off by a penalty. Garret Laudenslager accounted for Line Mountain’s late score, finishing with 102 rushing yards on 16 carries as the Eagles rolled up nearly 400 yards of total offense. On tap for the Eagles is a much-shorter trip to Elizabethville for a Mid-Penn Liberty scrap with Upper Dauphin (0-1). Kent Smeltz’s Trojans led early yet eventually suffered a 43-6 loss to a remarkably athletic Steel-High squad. Christian Snyder was UD’s most-productive offensive performer, as the junior back collected 86 rushing yards and the Trojans’ lone touchdown on nine totes. Snyder also caught two passes for 17 yards from senior QB Tyler Cleveland (3-for-9, 24 yards). Chance Crawford led UD’s defense with nine stops, but he also rushed 15 times for 45 yards.