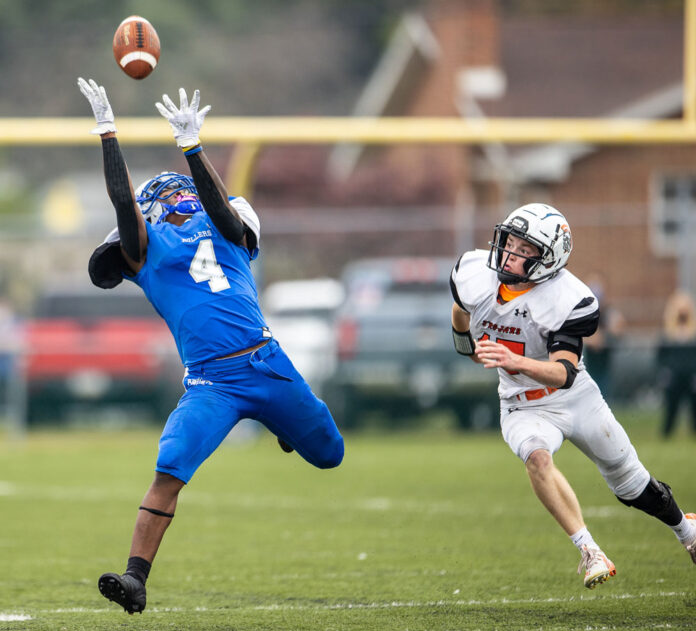 Three playoff teams for the Capital Division — Middletown, Steel-High and Camp Hill. Two of those squads have claimed District 3 titles. Steel-High won the Class 1A crown two weeks ago, and last Friday night the Lions upset York Catholic 21-7 in the Class 2A championship game. I call it an upset and that might ruffle the feathers of the Lions and their fans, but they were the underdogs. Camp Hill has only 28 players on its roster and numbers issues are just a way of life for the Lions. But they were able to get all the right players healthy and in the positions Tim Bigelow and his staff wanted for the game with York Catholic. Here’s the crazy part: Camp Hill is known as a team that likes to throw the ball all over the yard with strong-arm QB Daniel Shuster pulling the trigger. Against the Fighting Irish, Camp Hill grabbed the lead then went on a nearly 11-minute drive to ice the game away. I mean, York Catholic had only 32 offensive snaps the entire game. That’s a crazy number. Next up for Camp Hill is Bishop McDevitt Wyncote at home Friday night in a PIAA Class 2A quarterfinal.

Rollers clicking on the ground and through the air:

I keep hearing Steel-High is a running team. You don’t score 50 a game if you are a running team unless you are Southern Columbia. The Rollers are a very good running team, but they can go up-and-down the field with the best of them and that’s what happened Saturday at Cottage Hill against Muncy in a PIAA Class 1A game. The teams combined for 93 points (50-43 Rollers win) and more than 1,100 yards of total offense was put up. Quick, when was the last high school game where you saw the two teams combined for more than 120 total offensive snaps? No wonder it was 50-43. The halftime score was 36-14 Rollers, so the explosion came early in this one. Odell Greene had 101 yards on nine carries and a TD; QB Alex Erby threw for 264 yards and four touchdowns; Damein Hammonds had five catches for 135 yards and three scores; and Mekhi Flowers added five grabs for 115 yards and a TD. All this was their numbers in the first half. Crazy.