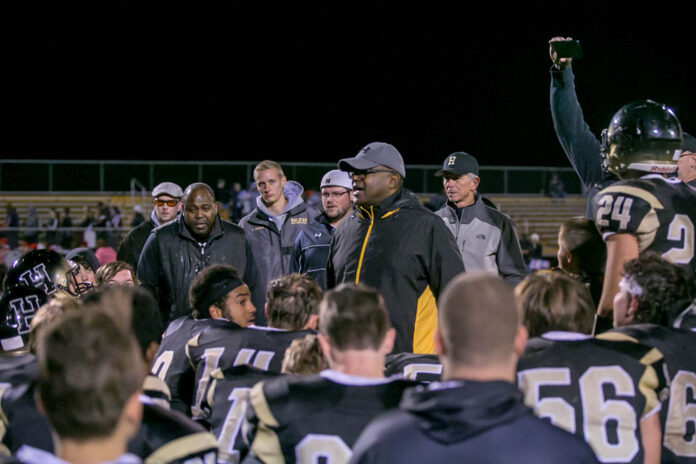 Flashing an effective passing game that complemented its run-first philosophy, Juniata emerged with a 20-7 victory over Clearfield in a season-opening game that began last Friday and ended some 24 hours later at Mifflintown’s Klingensmith Stadium.

Aaron Kanagy completed nine of 14 passes for 199 yards to lead Kurt Condo’s Indians (1-0), connecting with tight end Makih Hunt for an 18-yard touchdown that had the hosts sitting on a 12-0 lead in the first half. Waylon Ehrenzeller’s 35-yard burst earlier in the contest – the game was suspended midway through the opening quarter – had Juniata up 6-0.

Laub finished with a team-high eight tackles for the Indians, one more than Ehrenzeller (one sack) and lineman Lane Peiper. Shepps added his first career interception.

Up next for Juniata is a visit to Selinsgrove (1-0), which popped Bellefonte 32-0 behind 208 passing yards and two touchdowns from quarterback Mark Pastore (10-for-16). Gavin Bastian was the Seals’ big-play target, catching five passes for 155 yards and a 60-yard score.

While Line Mountain hopes to rebound from its season-opening 41-13 reversal at Penns Valley, it won’t be a simple task since fourth-ranked Danville (1-0) is en route to Ressler Field.

What’s disappointing for Brandon Carson’s Eagles (0-1), who led the host Rams 7-0 after one quarter and 13-7 at the halftime break. Nolan Baumert rushed for one touchdown, while Brayden Boyer hauled in a 35-yard scoring pass from Blake Readinger for the other.

Three turnovers pestered Line Mountain, but so did an effective Penns Valley attack. QB Jackson Romig completed 15 of 28 passes for 202 yards and three touchdowns. Miles Brooks (7-86), Hunter Lyons (2-21) and Josh Lieb (1-10) were on the receiving end of Romig’s TD heaves.

Danville (1-0) motored past Bloomsburg 58-0 behind an efficient offense led by feature back Ty Brown-Stauffer. A West Point commit, Brown-Stauffer rushed 10 times for 142 yards, scoring on runs of 38 and 5 yards. Aaron Johnson added 49 yards on 4 carries, including a 35-yard TD.

The Ironmen scored on five straight first-half possessions and on their first series after halftime.

UPPER DAUPHIN LOOKING TO EVEN ITS RECORD

Morgan finished with 160 yards on nine carries, but also snared three Aidan Bingaman passes for 25 yards and another score. Bingaman (4 of 8 passing, 83 yards) also hooked up with Konner Walker for a 58-yard touchdown pass.

Up next for UDA is a visit to Shenandoah Valley, which opened with a 40-14 loss to Columbia-Montour Vo-Tech. The Blue Devils managed just 13 rushing yards collectively, but junior QB Ben Dempster completed 12 of his 22 passes for 159 yards and one touchdown.

Junior Nick Ryan had a huge effort in the loss, making 11 catches for 202 yards and both scores.

Halifax (0-1) tumbled 48-6 to visiting Hamburg last weekend, falling into a 36-0 deficit it couldn’t escape. Teegan Carroll’s 31-yard toss to Peter Ranck accounted for the Wildcats’ lone score. Carroll was 3-for-12 for 48 yards in his varsity start. Earl Mosley’s club will visit Midd-West (0-1) this weekend, taking on a Mustangs group that lost 54-0 to Mifflinburg. …

Newport (0-1) will try to recover from its season-opening 43-7 loss at Camp Hill when it pays a visit to West Perry (1-0). Todd Rothermel’s Buffaloes were down 43-0 before Travis Lilly broke off a 39-yard run with seven minutes to play. Lilly carried five times for 49 yards, while senior Aiden Dishman collected 69 yards on 15 carries against the Lions. …

Susquenita (0-1) was victimized by West Perry 35-6, spoiling the Blackhawks’ first outing on their new artificial playing surface. Blaise Swancer’s 14-yard catch of a Derek Gibney pass put Augie Glass’s squad on the board with just over a minute to go. Gibney finished with 176 yards through the air on 21 of 33 passing, but he was picked off three times. …

James Buchanan (1-0) parlayed a late catch-and-run from Jacob Frey that covered 50-plus yards into a 22-20 triumph over York County Tech. John Stoner fired the game-winning touchdown pass, which arrived with less than a minute to play.