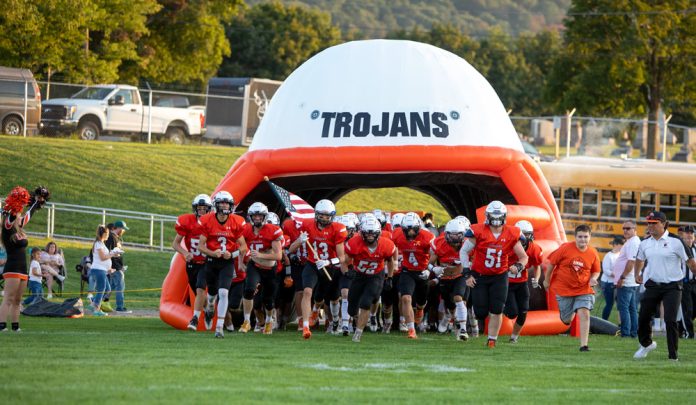 Can they make it two straight?

That’s the question Line Mountain (1-3) hopes to answer in the affirmative when Brandon Carson’s club pays a visit to Susquenita (1-3, 0-1) this weekend for their Mid-Penn Liberty Division opener.

While Marian spent the early portion of the contest ganging up on feature-back-turned-quarterback Nolan Baumert, that provided just enough space for burner Ian Bates to rattle off a pair of long-distance touchdown runs.

Bates rushed 68 yards for his first score with more than three minutes remaining in the opening quarter, a timely touchdown that came on the Eagles’ initial play from scrimmage following a punt block that Marian turned into a Michael Gelatko return and score.

Then, with 7:57 left in the first half, Bates scooted 57 yards for another score that had the Eagles up 13-6 at the break.

Bates finished with a career-high 124 yards on just 11 attempts.

While the determined Baumert made it 19-6 late in the third quarter with an 8-yard run off an option keeper, his 57-yard run on the first play of Line Mountain’s next series eventually led to a 3-yard TD by fullback Chandon Maurer that made it a three-score contest.

Baumert wound up with 89 yards on 10 attempts before leaving the game with a slight ankle injury. Regardless, he’ll be difficult to keep out of the Line Mountain lineup.

Line Mountain’s defensive unit had a productive night as well. While Maurer piled up 20 tackles, Quinn Dunkelberger added 18 and Brayden Boyer wound up with 13. That trio also combined for 7.5 tackles for loss and three sacks, and Maurer recovered a fumble.

Just a few miles down Route 225 from Line Mountain’s Mandata home, Susquenita was dropping a 30-7 decision to Upper Dauphin. Augie Glass’s Blackhawks had all kinds of trouble stopping the run, as the Trojans rushed for 341 yards and added 72 more through the air.

Headed for Newport’s Katchmer Field this weekend – where he spent a number of years as the Buffaloes’ defensive coordinator – Kent Smeltz won’t worry about friendly reunions until after his Upper Dauphin Trojans (2-2, 1-0) scrap with Todd Rothermel’s outfit.

UDA was able to rush for 341 yards in a 30-7 conquest of Susquenita as Brady Morgan totaled 146 yards and one score on 14 attempts and Konner Walker tacked on 110 more and another score on just seven totes.

Walker also caught two passes for 58 yards and another touchdown while part of UD’s offensive attack, and he picked off two passes on defense.

Aidan Bingaman only attempted six throws, but he completed three for 72 yards and two scores, the second to Landon Mace for a 14-yard touchdown.

Newport (0-4, 0-1), meanwhile, is still trying to get its offensive house in order after a 36-0 shutout at the hands of Juniata. It was the third consecutive shutout loss for the Buffaloes, the first time that’s happened since the 1969 campaign.

Aiden Dishman squeezed out 63 yards on 17 carries for Newport, which was limited to 82 offensive yards by the Juniata defense. The Buffs picked up a tremendous effort from ‘backer Zach Bellis, who racked up 14 tackles, caused one fumble and recovered another.

Hoping to continue its march toward a second straight Liberty Division crown, Juniata (2-2, 1-0) will visit Halifax in search of its second league victory in as many weeks.

While quarterback Aaron Kanagy threw for 124 yards by completing six of his 12 pass attempts – he was picked off twice – two of those Kanagy aerials led to touchdown receptions in the first quarter by Seth Laub (9 yards) and freshman Jasper Shepps (29).

Juniata actually led 23-0 after one quarter.

Laub added 89 yards on six carries, while Waylon Ehrenzeller finished with 51 yards on nine attempts. Ehrenzeller scored twice, cashing in from 15 and 2 yards.

Merely one week after sharing nearly 300 rushing yards, Cohen Bechtel and Isaac Miller combined for 52 on 18 carries against the JB defense. Miller did catch a 14-yard touchdown pass from Teegan Carroll for Halifax’s lone score.

Miller was all over the place defensively, amassing 22 tackles. Bechtel added 10.

JB to square off against unbeaten West Perry

Cliff Pine’s James Buchanan squad (3-1, 1-0) may be one of the pleasant surprises in District 3, but the Rockets have yet to run into anything quite like West Perry (4-0).

What’s interesting is Bob Boden’s Mustangs already own wins over Susquenita, Newport and Juniata. Can they run their record to 4-0 against Liberty Division opposition?

West Perry was in terrific form last weekend by wheeling to a 40-14 victory over Trinity.

Quarterback Marcus Quaker accounted for 162 yards from scrimmage, passing (7 of 10) for 80 and running for 82 more. His 7-yard touchdown run capped the Mustangs’ latest success.