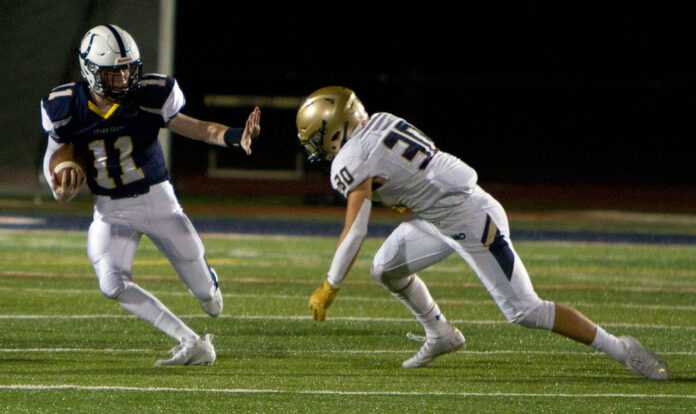 Cedar Cliff starting quarterback Ethan Dorrell has already thrown for 500 yards, completed 77% of his passes and has six touchdown passes without an interception. And for good measure the junior guided his squad on a late drive to upend Cocalico with a touchdown pass in the final minute. Big win for the Colts. Their quarterback has been a steady hand for an offense that has a balance of weapons. This is Dorrell’s first year as the starter, too.

Saunders quickly proving he’d worthy heir to the reins of the Crusader offense:

Sorry to sound like a broken record, but Bishop McDevitt once again has a budding star cutting his teeth at the quarterback position. Seriously, when was the last time the Crusaders had to answer hard questions at the QB spot? The correct response is almost never. Freshman Stone Saunders has come out of the gate as a first-year high schooler hitting all the right notes. He’s thrown for 401 yards, is completing nearly 60% of his throws and has three touchdowns with an all important zero in the interceptions column. Colleges had already noticed before the season began.

Milton Hershey’s Dion Bryant bursting back onto the scene:

Welcome back Milton Hershey running back Dion Bryant, who totaled five touchdowns and more than 300 rushing yards in the Spartans’ cruise-control victory over Susquehanna Township. We missed you in 2020, Dion.