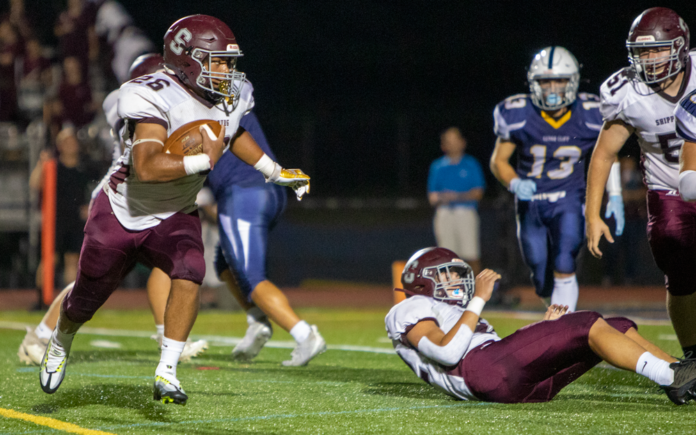 NINE MONTHS IN THE WAITING:

It took nine months for Eric Foust and his Shippensburg crew to deploy the play the Greyhounds ran on its first snap from scrimmage.

It was well worth the wait. QB Tucker Chamberlin pitched the ball to running back Trae Kater on the first play from scrimmage. Kater zipped the pitch to wideout Erby Weller for a 51-yard completion.

Foust knew the Greyhounds had to get off to a fast start Friday night in a wacky season opener delayed by a lockdown in Shippensburg. His players responded, and it set the tone for the rest of the night in a matchup in which the Greyhounds never trailed.

The signs of a revival in Greencastle started to sprout last year. If the Blue Devils’ season-opening performance against Big Spring — a 28-13 victory — is any indication, better times are ahead for Devin McCauley’s crew this year. That’s a welcome sight for a team which last had a winning season in 2015. Greencastle host Berkeley Springs (W.Va.) Friday night at 7 p.m.

When East Pennsboro knocked off York Suburban 34-14 on Saturday evening, the victory did more than give the Panthers an out-of-the-gate share of first place in the Colonial Division. It was win No. 350 for the program which dates back to 1958 when Enola High School became East Pennsboro Area High School. Props to East Penn stat guru Bill Purnell for this gem!