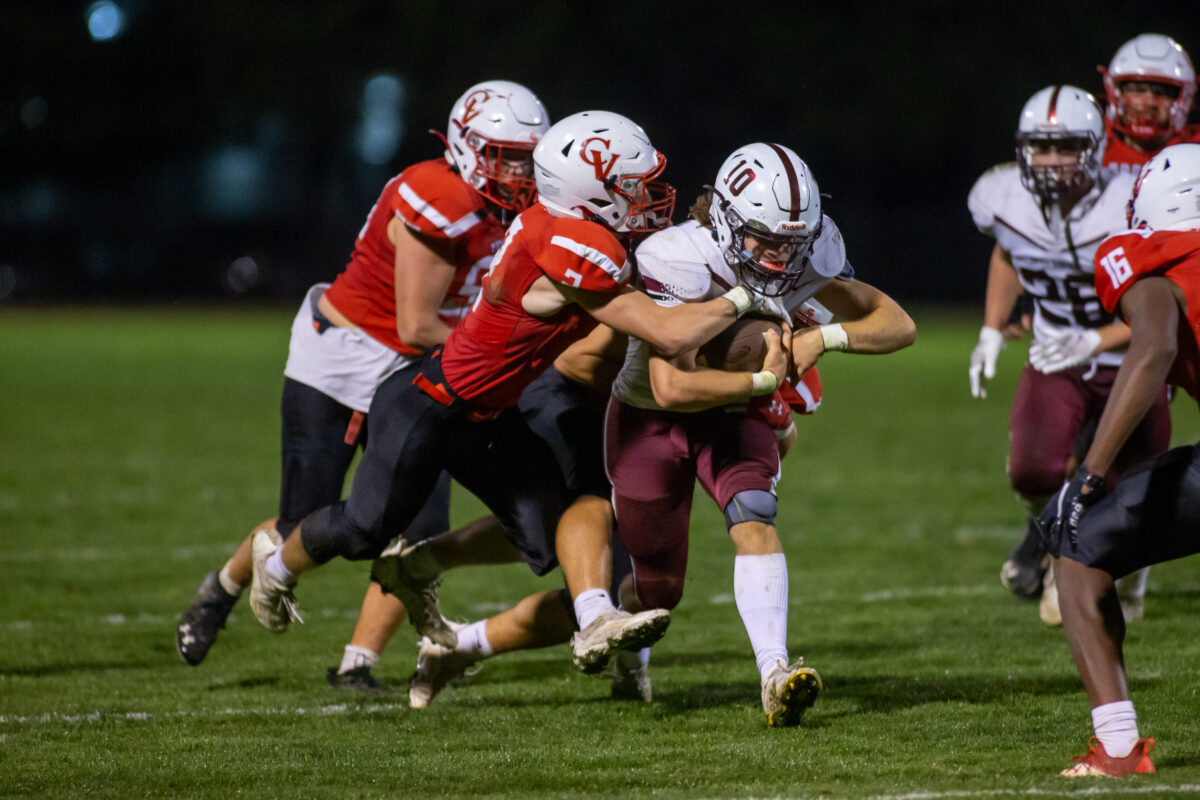 This was an emotional evening for Cumberland Valley with the recent passing of its legendary head coach Tim Rimpfel, and one of his many coaching tree disciples, Eagles current head coach Josh Oswalt, wasn’t able to be on the sidelines for this game. So, it was not a real surprise the Eagles came out the gates a wee bit sluggish.

But once they figured out what Altoona was doing offensively, the defense slammed the door and the CV offense heated up just before halftime, scoring late in the second quarter and then on its opening possession in the third quarter to seize control.

It wasn’t a riveting game by any stretch of the imagination, but the better team clearly won. Cumberland Valley has now scraped together three straight wins after an 0-2 start. Altoona has dropped two in a row after beginning the season with three wins in a row.

Related: Loss of a legend: Former players/assistant coaches reflect on the life of Tim Rimpfel

Related: The man I knew: A remembrance of Tim Rimpfel

Quarterback: Throwing the ball is not why Aidan Steinbugl is the starting quarterback for the Mountain Lions. That’s pretty clear. He did have time to throw, though, and even the easy ones that were open he didn’t make. Plus he threw a pick-6 on a terrible decision in the fourth quarter that put the game out of reach. In the running game he’s a weapon, and a couple of those read-option plays he made a slick pull of the ball to get some yards in space. Grade: C-

Running Back: Ethan Stroup is the go-to back, and he’s a horse between the tackles. He raced to 43 yards in a hurry. He’s a 215-pound between-the-tackles type of runner who doubles as an outstanding linebacker and is clearly an LB at heart. I thought Altoona went away from him too quick and for too long of a stretch in the game. Now, they were getting the edge with Steinbugl and Andre Dokes for a stretch. But not enough mix-and-match to keep the Eagles off balance longer. Grade: B-

Wide Receivers: The more targets Ethan Hileman gets the better off this offense will be in the passing game. He’s a reliable wideout. Too many calls for passes to backs instead of going to Hileman more. Grade: C

Offensive Line: They have some size up front, and for the better part of the first half this group was dominating the game. The Mountain Lions were having success in between the tackles and on the edge. Once CV defense figured it out, they struggled to counter and were getting overwhelmed with quickness and gap shooting. Grade: C

Defensive Line: When it came to in between the tackles, the three down linemen were pretty good all night. Surrendered only 130 yards on the ground. Xavier Duse and Michael Riccio provided some headaches early. But they created zero pressure on the pass rush. The only heat on the QB came from blitzers.  Grade: C+

Linebackers: Stroup is a really good outside linebacker. He was all over the field and came up with a couple sacks as well. He was a problem all game for the Eagles. The inside ‘backers were solid against the run, but struggled to recognize when it was a pass and cover those gaps in Cover 3. Grade: B

Secondary: Early on they were right on point, but as the game wore on the CV receivers were winning those one-on-one battles and making all the clutch catches. If it wasn’t for penalties and a couple slips, they easily would have surrendered 200-plus yards passing. Grade: C-

Special Teams: It felt like CV was inches from blocking every punt for the Mountain Lions. The pressure all came from the right side and was consistent. Kicking game was OK, return game was solid but the kick coverage was shaky all night.  Grade: C

Quarterback: Junior Isaac Sines, a lefty, is growing into his role in this offense. He did struggle early, but once he found his groove he motored the Eagles down the field. Completed 11 of 18 passes with a couple drops on good throws when his receiver slipped. He’s sneaky elusive in the pocket, too. If he gets outside, he has the speed to turn what looks like nothing into a chunk play. Throws a nice ball, too. Made only one mistake, and it was that decision to throw the ball for an interception while avoiding a sack. No impact on the game, but take the sack. Grade: A-

Running Back: It’s clear they want J.D. Hunter to be the go-to back because of his ability in the open field. He runs really hard for a back who checks in at only 180 pounds. He doubles as a wideout and is a very dangerous pass receiver as well. I like the changeup Bruce Staretz brings to the run game. Nothing flashy, just falls forward more often than not and runs extremely hard.  Grade: B-

Wide Receivers: Griffin Huffman, Caiden Pines and Hunter each had three receptions. They are all good route runners. Hunter had both touchdown catches. They have options, and you can see the pieces are starting to come together. Couple slips on balls that were clear first-down catches. Seriously, this group has some major upside. Grade: B

Offensive Line: They were OK in the run game but didn’t handle the numbers game in tight spaces well. Only a handful of top quality holes that I saw. Most of the work was done by the back. Very good interior pass blocking but didn’t pick up blitzes well at all. Mixed bag. Grade: C

Defensive Line: This group was getting beat both ways most of the first half. Altoona started by pounding it inside with success then found plenty of open space on the edges. Credit for rebounding when the adjustments were made, but on basic execution of the game plan from the jump they struggled at times. Grade: C+

Linebackers: Alex Sauve had himself a game, and he’s only a sophomore who is going to get better … a lot better. He had sacks, tackles for a loss and pass breakups. He was everywhere. It took a while for the outside ‘backers to adjust on the jet sweeps, but once they made the adjustment it was game over. The pick-6 by Max Wilken was a layup as it was such a bad pass. He was in the right area, and as an OLB that’s why it looked so easy. Grade: A

Secondary: In terms of run support, I thought this group was very good. And they were sticky on receivers for the most part in pass coverage. They weren’t really tested, though, as Altoona does not have a developed pass game. Did their job, though. Grade: B-

Special Teams: In addition to being the QB, Sines is a weapon as the kicker. A pair of 35-yard field goals with plenty of leg. Crazy part is he throws left handed and kicks with his right foot. Odd, but who cares? He might win a close game before this season is over. Kick return game was outstanding. Three times it set CV up in very good field position. And the kick coverage was outstanding. Whoever the special teams coach is on the staff should not buy any coffee or doughnuts this weekend for meetings. Punter Paddy Hernjak averaged 46.5 yards on two punts. That’s a big difference maker at the high school level. Grade: A+