Late field goal by Kai Kaszubowski seals victory for State College in the PIAA Class 6A quarterfinal, 16-13 over Harrisburg 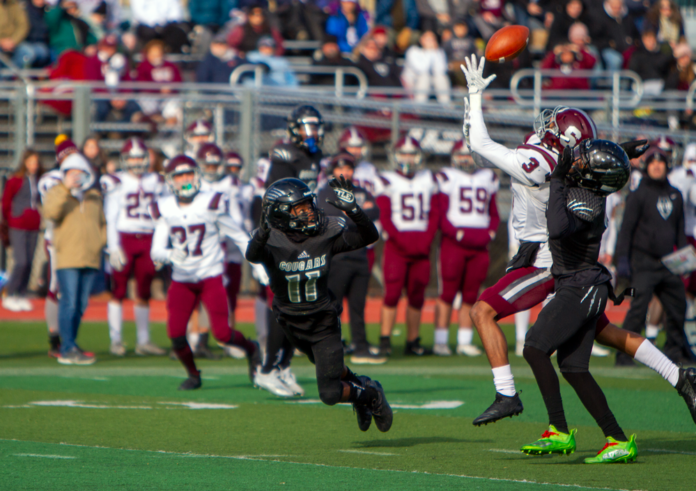 Once State College fell behind Harrisburg by 10 points late in the third quarter the path to victory for the Little Lions was a murky proposition at best. Turns out the five-loss Little Lions were just getting started against the one-loss Cougars. State College scored 13 fourth-quarter points, dominated the line of scrimmage all day and left wind-swept Severance Field Saturday afternoon with a well deserved 16-13 PIAA Class 6A quarterfinal victory.

It starts with the line of scrimmage, and on both sides of the ball State College was dominant. The Little Lions limited Harrisburg to nine yards rushing on 24 carries and offensively pounded out 218 yards on a staggering 52 carries. State College ran twice as many plays (68-34) and leaned on the Cougars all game by dominating time of possession by nearly nine full minutes.

Junior kicker Kajetan Kaszubowski’s right leg propelled the Little Lions into the state semifinal round opposite WPIAL champion Mt. Lebanon. Kaszubowski was 3-for-3 converting field goals from 33, 34 and 37 yards with enough wind around to impact kicks. His final one, from 34 yards out, came with :03 on the fourth-quarter clock.

State College senior RB Brady Bendik, a 6-4, 215-pound horse in between the tackles, carried 32 times for 134 yards and had the lone State College touchdown. … In the fourth quarter, when State College scored 13 of its 16 points, the Little Lions piled up 142 yards on 23 snaps. Harrisburg had the ball twice the final 12 minutes, went three-and-out both times and those six plays yielded minus-1 yards. … State College won despite three interceptions by the Cougars. Senior Justin Cook tied the Harrisburg school record for interceptions in a season with his 11th pick in the third quarter. … Harrisburg RB Mahkai Hopkins was limited to 10 yards on 10 carries. … Combined the two teams rolled up 155 penalty yards on 16 accepted flags including five personal fouls. … Harrisburg playmaker Kyle Williams scored the Cougars’ first-half touchdown on a 43-yard stellar catch-and-run. He finished with four catches for 79 yards. … State College had an 18-play, 70-yard drive in the first half that chewed up nearly nine minutes of clock but came away with no points. … State College sophomore quarterback Owen Yerka had 62 of his 70 rushing yards in the fourth quarter on seven carries. The Little Lions found something on the left edge with Yerka down the stretch and it paid huge dividends. … State College was 7-for-13 on third down conversions including 4 of 6 in the second half.

State College deserved to win the game. They were the better team overall from start to finish. Harrisburg really didn’t do anything to lose this game, but the Cougars found themselves in the position of behind helpless to have a say in the outcome in the fourth quarter. Once State College seized momentum with a Bendik touchdown with 8:58 to play that made it 13-10, it was clear State College was in complete control. The Cougars defense was dog tired from being on the field so long and Harrisburg’s offense was rendered powerless to stem the tide. Once State College started rolling downhill late in the third quarter, each play the rest of the way only added fuel to the Little Lions’ fire. Harrisburg had three possessions after grabbing a 13-3 lead inside the final 2½ minutes of the third quarter. And each time the Cougars went three-and-out and punted. The snowball from State College was rolling downhill on Harrisburg on both sides of the ball.

It was hard to decide which group up front was better for the Little Lions. Either way, the line of scrimmage victory across the board belonged to State College. The Little Lions’ game plan was a meat grinder of ground-and-pound inside the tackles with a little sprinkle of outside shots on a very limited basis. It took extreme patience, even down 10 points, to stick to that plan. State College head coach Matt Lintal never wavered and stayed true to his plan. In the end, when Harrisburg desperately needed a stop of any kind to seal a victory in the fourth quarter, the tank was empty.

“I’m so proud of this team. It was a great win. The defense played their heart out. This team creates our own energy. We had a lot of momentum today. Defense made a ton of big plays and that fueled our offense. It felt great.” — State College RB Brady Bendik
“It’s been a mixed bag of guys up front all year with the injuries we’ve had. Since the first Harrisburg game, this group has come together. That loss was the turning point of our season. Those guys were grinding today and getting the job done.” — State College head coach Matt Lintal