COMMENTARY: The X-factor that propelled Bishop McDevitt to its 15th District 3 championship 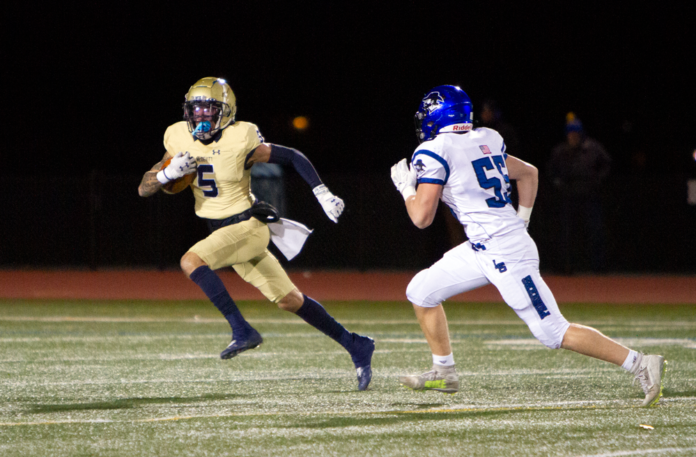 This was the 15th time tradition-rich Bishop McDevitt has claimed a District 3 championship trophy.

This one stands out as one of the most impressive in my book because the Crusaders had to win with one hand tied behind their back against the two-time defending champions from Lampeter-Strasburg.

The final was 7-0 Crusaders in an extremely competitive and physical game that was contested on a bitterly cold night with a searing 15-20 mile-per-hour wind that took away McDevitt’s competitive advantage.

McDevitt’s 300-plus yard passing offense with Stone Saunders firing the ball around the lot and having his choice of three elite receivers to target was taken off the table.

The Crusaders’ passing game, complemented by a more-than-adequate running game, makes them very difficult to defend most nights. But this Friday was not like most nights. Throwing the ball was impossible.

McDevitt tried in vain against and with the wind to get anything cooking in the passing game. Mother Nature simply threw up a big red stop sign at any pass that traveled more than 5 yards in the air. It was brutal.

The frigid conditions and howling wind actually favored Lampeter-Strasburg. The Pioneers didn’t have to cover those wideouts, their offense is built around the run with just enough out of the passing game to be lethal. In these conditions, L-S was built to have success.

Enter the X-factor on this night — McDevitt’s defense. It has been very quietly rock solid all season but gets lost in the sea of 56-point output after 56-point output by the offense.

And the Crusaders’ D was facing an offense that was built for success on a night tailor made for the Pioneers to pull off the upset. Holding L-S to zero points required a little luck, some bend-but-don’t break in the fourth quarter and a bushel of big plays from several players that made sure the Crusaders get one more week of practice.

McDevitt’s defense surrendered only 187 rushing yards to the Pioneers on 50 carries, forced three red-zone turnovers, had five sacks and added another five tackles for loss to finish with 10 stops behind the line of scrimmage.

As the game wore on the Pioneers found more success on the edges, especially running left, but simply could not stop turning the ball over at the end of impressive drives instead of scoring.

DT Riley Robell was a monster in the middle. He finished with three sacks and two tackles for a loss. Five stops behind the line is massive, but it was the timing of his stops in critical situations that made his work all that more impressive. He also recovered one of the three fumbles.

Linebacker Ryan Russo was all over the field. He made a couple stops on those sneaky good QB read-options the Pioneers run that prevented really big plays. He also came up with a huge sack in the fourth quarter.

Robell had the most impact on the game. Russo was the best player on the field over the course of four quarters for the Crusaders.

DE Jamani George-Heron not only recovered a fumble, he came up big in the second half holding the edge to keep those chunk plays outside of him from happening in crunch time. He was getting folded inside the first half on a regular basis. He was not off the mark very often the final 24 minutes when the Pioneers went back to the well.

After McDevitt took that 7-0 lead on Marquese Williams’ nifty and ad-libbed 30-yard touchdown run with 65 seconds remaining in the third quarter, the Crusaders’ offense went silent.

Lampeter-Strasburg ran 23 of the final 29 plays in this game. This championship came down to McDevitt’s defense making one touchdown stand up against an offense built to flourish in less-than-stellar conditions.

“I never look down on our offense,” Robell said. “They punched one through and got us a lead. We made our adjustments that we need to tonight, and tackled well. That made a difference.”

Right after McDevitt scored to go up 7-0, the Pioneers marched from their own 32 to the Crusaders’ 25 before Giovanni Malatesta fumbled after a 6-yard run on first down at the McDevitt 19 and George-Heron recovered.

McDevitt’s offense immediately went three-and-out in less than 90 seconds and gave the ball back to L-S at the Pioneers’ 39.

Back on the march, L-S converted on third down twice and completed the only normal looking pass of the evening, really, on fourth-and-8 from the McDevitt 19 to set up first-and-goal at the 10 with less than four minutes remaining. The intense and impressive drive came to a screeching halt when Pioneers QB Berkeley Wagner pulled out a little quick from under center and left the ball on the ground.

Robell pounced on the miscue and gave the ball back to the offense with 3:40 to play. Three more snaps in less than 90 seconds put the Crusaders’ defense back out on the field with 1:47 to play and 52 yards of field to defend.