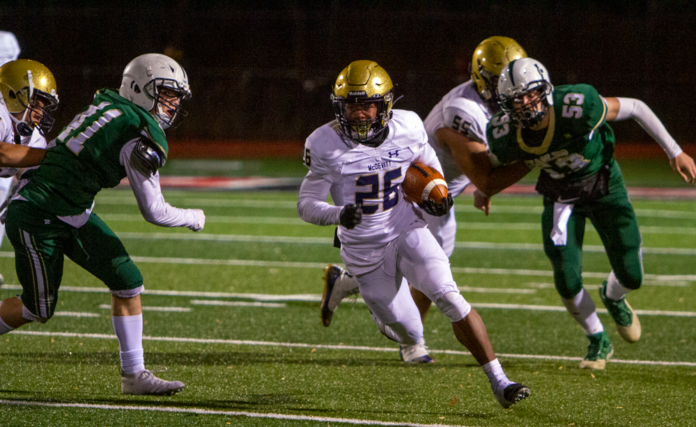 Bishop McDevitt punched its ticket to its first appearance in the state final since 2013 Friday night in Coatesville.
Led by a defense that kept Bishop Shanahan’s offense off the scoreboard the final 31 minutes and an efficient run game, McDevitt took out the Eagles 28-21 in one the PIAA Class 4A semifinals. The Crusaders will play WPIAL winner Aliquippa for the state title.

KEYS TO VICTORY
It starts with the Crusaders defense that looked uncomfortable most of the first half but came alive after halftime to slam the door on the Eagles offense with authority. McDevitt opened the game with a three-man front and was playing mostly zone coverage against Bishop Shanahan’s spread offense, which is powered by quarterback Cooper Jordan. At halftime the Crusaders returned to their regular four-man front and went man coverage across the board. The Eagles had less than 100 total yards the second half, and the only touchdown for Bishop Shanahan was a 92-yard kickoff return by Jordan.
McDevitt came out after halftime with plenty of juice and scored 15 quick points to turn a 14-13 intermission deficit into a 28-14 lead. After Bishop Shanahan went three-and-out to start the third quarter, Mario Easterly returned a punt 40 yards to the Eagles’ 13-yard line. Three snaps later, Cyncir Bowers scored from 3 yards out. The next time Bishop Shanahan had the ball, Crusaders DE Nate Kinsey knocked a Jordan pass in the air, caught it on the way down and scampered 25 yards for a defensive touchdown and the second McDevitt score in two minutes and a 14-point lead.

INSIDE THE NUMBERS
Bishop McDevitt had more penalties (12) than pass attempts (9) and more penalty yards (113) than passing yards (90). The Crusaders committed 10 of those infractions in the first half. … The Crusaders running back duo of Marquese Williams and Bowers combined to rush for 159 yards and two touchdowns. Williams earned his game-high 108 yards on 22 carries with a 25-yard touchdown run. The Eagles defense stunted like crazy all game, and the two running backs made tacklers miss consistently all game. … Bishop Shanahan had 77 total yards in the second half on 27 plays. That’s 2.9 yards per play. … Jordan accounted for 169 of the Eagles 210 total yards. … Bishop McDevitt attempted only three passes in the second half and didn’t complete any of them. … Combined the two teams, both with high-powered offenses, punted 11 times.

WHAT WE SAW
This was a very entertaining and quality Class 4A state semifinal. Once Bishop McDevitt went up two scores early in the third quarter, Crusaders skipper Jeff Weachter turned the game over to his defense. Freshman quarterback Stone Saunders was struggling, so Weachter leaned on his running backs and trusted his defense could finish the job. And they did. Bishop Shanahan took a 14-7 lead at the 7:32 mark of the second quarter, scoring on each of its first two drives. The offense never put another point on the board.

For all the talk about points and yards on offense heading into this contest, it was the two defenses that shined the brightest in this game over 48 minutes. The two teams combined for 449 total yards of offense and five touchdowns. Neither defense surrendered a point in the fourth quarter, and the Eagles’ defense didn’t allow the McDevitt offense to put a point on the board the final 22 minutes and change. This game was a physical meat grinder with both defenses forcing the offenses to earn everything they got.

THEY SAID IT
“We had to get that quarterback under wraps. Once we started playing man we locked them up pretty good. We had to be disciplined.”

“Once I saw that ball go up, I knew I had to grab it. And I saw the end zone and just took it to the house. Second half the defense came together and we knew we had to win this game. We changed our defense up a little bit at halftime, went from a three-man front to a four-man front and it worked. We played a four-man front all year, and when we switched it up to that it made for a whole different mindset.”