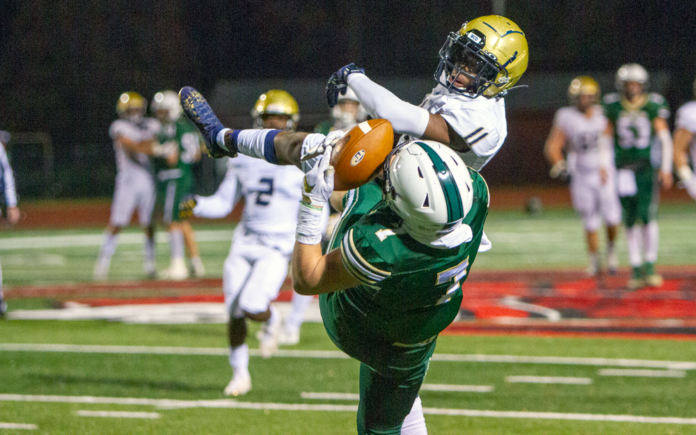 This Bishop McDevitt team won its 15th District 3 championship and earned a ticket to the state final for the first time since 2013 over the last eight quarters of football by scoring four offensive touchdowns.

McDevitt’s back-to-back one-touchdown victories, 7-0 over Lampeter-Strasburg and 28-21 over Bishop Shanahan, were fueled by a defense that is taking center stage as the stakes get higher.

McDevitt’s offense isn’t broken or overtly struggling. The opponents are tougher and quarterback Stone Saunders, for the first time this season, looked like a young man playing his first year of varsity football Friday night. He’s still an extremely talented signal caller. This is his learning curve.

What is working for the Crusaders offensively is a run game powered by Marquise Williams and Cyncir Bowers.

Still, four touchdowns over eight quarters of high-stakes Class 4A football is not necessarily a recipe for success.

You could argue I sound like a broken record singing the praises of this McDevitt D, but the proof is in what they’ve done the last eight quarters.

Let’s just start with McDevitt head coach Jeff Weachter throwing the ball exactly three times the second half nursing a one-score lead. Those who know the Crusaders under Weachter know Jeff likes to take his shots, particularly with a quarterback who has a live arm and depth at the wide receiver position.

Like his defense the final 31-plus minutes, Weachter stayed disciplined and ran the ball Friday night in the 28-21 victory over the Eagles even when the down-and-distance screamed for a pass of any kind. He trusted his defense and milked the clock for every second it was worth.

Over this torrid two-game stretch, the Crusaders defense has pitched a shutout, allowed only two touchdowns, scored a touchdown and produced five turnovers, including a pick-6 Friday by DE Nate Kinsey.

And the Eagles had a quarterback in senior Cooper Jordan who is not only ridiculously fast, but has a rock-solid arm. And in the absence of extreme discipline he is a 25-yard play waiting to happen at any moment.

Jordan was on fire early, too. He marched the Eagles down the field twice to open the game to stake Bishop Shanahan to a 14-7 advantage.

MCDEVITT DB CHASE REGAN, WHO ALONG WITH JAIRE RAWLINSON, EXCELLED IN MAN COVERAGE DURING CRUNCH TIME.

The Crusaders defense looked uncomfortable and out of sorts most of the first half. And it was because they were playing a 3-4 with zone coverage against the Eagles’ spread offense instead of their normal 4-3 and man coverage.

Once they made the switch back at halftime, McDevitt’s D was flying all around the field making plays at every level.

Just how good were the Crusaders on that side of the ball?

The Eagles’ longest play from scrimmage was a 30-yard pass on the last play of the first quarter. After scoring on its opening two possessions, Bishop Shanahan went nine straight drives without a point. And the second half all the Eagles could muster was 77 yards of total offense, and 45 came on the final drive when McDevitt turned the ball over on downs inside the final minute at its own 27.

That is how you lock down a game and punch a ticket to the state final.