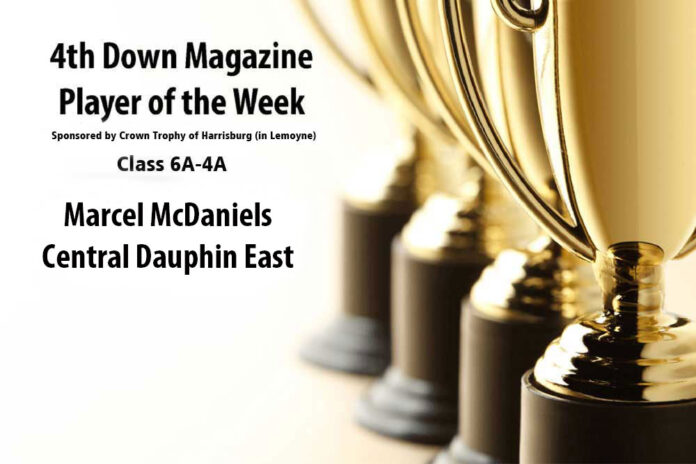 That’s one way to do it.

Usually on the receiving end of a crosstown rivalry loss, CD East handed Central Dauphin a pop to the jaw with a 31-14 win. At the center of the victory, which pushed the Panthers to 7-2 (5-1 Mid-Penn Commonwealth), was running back Marcel McDaniels.

And the senior earned 4th Down Big School Player of the Week because of it.

McDaniels churned out 178 yards and two scores (of 2 and 18 yards) on 30 tough carries to topple the Rams. Both of his TDs extended the Panthers’ lead in the second half.

He picked up 967 votes this week, topping all vote-getters in the big and small school polls, and he beat Cedar Cliff back Jontae Morris (650). Of the exactly 2,000 votes cast, McDaniels claimed 48% of them.

McDaniels and the Panthers have been one of the best teams in the Mid-Penn and District 3 this season, a game behind Harrisburg (8-1) and sitting comfortably in the third spot in the district Class 6A power rankings.

The Panthers finish the season with Carlisle at home before starting what may be a lengthy postseason run.