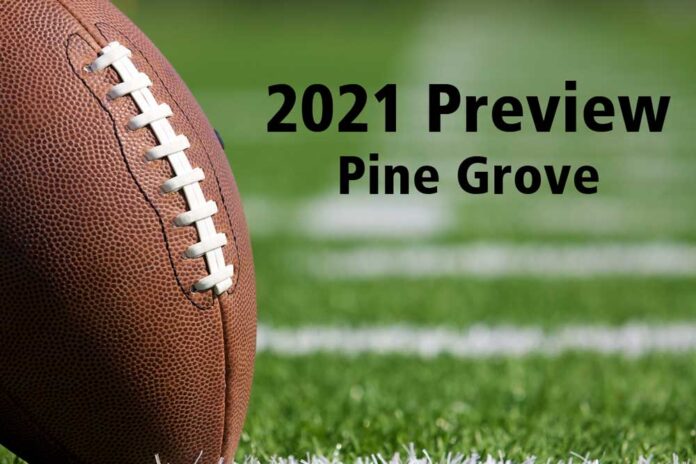 Outlook: Even though the Cardinals watched a trio of terrific skill people walk during graduation exercises, fourth-year skipper Frank Gaffney really is excited since his O-Line returns intact and having a strong front fits snugly into his program’s philosophy about controlling the line of scrimmage and winning the box. Pine Grove’s big eaters also will play a big role in providing running lanes for some untested runners and time to throw for starting quarterback Mason Kroh. Losing Josh Leininger, Shea Morgan and Brody Robinson definitely left some scars, but Gaffney & Cards are positive they can compensate in other ways since losing that remarkably productive trio.

1. Offensive front ready to play bigger role after experiencing plenty of growing pains in 2020: While Gaffney knew going into last season that his youthful O-Line might need time and seasoning before it would mesh and grow into a highly effective unit — especially since several then-freshmen would be logging plenty of playing time. Well, fast forward to 2021 and things are considerably different since right tackle Javin Ward, right guard Carter Raudabaugh, center Brennan Etzweiler, left guard Collin Ibarra and left tackle Tyler Sleva are prepped and ready to take another step or two forward since they return intact. Only Ibarra and Ward — ironically the only players who will start the season playing one way — are seniors. “I’ve said it each year since I’ve been at Pine Grove: The staple of our program has been controlling the line of scrimmage and winning the box,” Gaffney reiterated. “If you can’t win the box, there’s not many football games that you’re gonna win. There’s talent all over the area here, but the teams that win — you look at Tri-Valley, you look at Williams Valley, you look at North Schuylkill — these teams control the line of scrimmage. They do. At the end of the day, we have prided ourselves on trying to control the line of scrimmage and making sure we’re protecting those kids behind them. From last year, starting that many young kids, now I have the opportunity to watch them grow. … We have the athletes behind them, but we can actually rely on our offensive line this year and that’s a big step.”

2. Ibarra may have an important offensive role, but he’s best suited for defensive play: Fresh off a season during which he totaled 122 tackles — and didn’t lead the Cards in that category — Collin Ibarra will be the centerpiece of a Pine Grove defensive unit that wants to attack and attack and attack opposing offenses. Ibarra, in fact, will be one of the inside backers in Gaffney’s hybrid scheme. Yet if one listens closely to Gaffney, Ibarra may be just as productive off the field as he is whenever he’s on the prowl. “Collin Ibarra, at the end of the day, is our guy. He’s our dude,” Gaffney said. “He is just a class-act kid, yes sir, no sir. Doesn’t miss a weightlifting day. Leader. Picking up young kids and bringing them to practice. He’s the heart and soul of our defense, our signal caller. He could have been the Defensive Player of the Year (in our league) if we didn’t have (Brody) Robinson next to him. … As good as he is as a player, he’s a better leader.” Gaffney can’t say enough good things about Ibarra when it comes to his club, particularly since the talented Card volunteered to surrender his opportunities carrying or catching the ball to play on the offensive line prior to his junior campaign. “These days, who does that?” Gaffney wondered. Apparently, one Pine Grove player does.

3. Kroh has enjoyed plenty of success already, but now that he’s calling the signals on a full-time basis he’s ready for more: During his first two seasons at the varsity level, quarterback Mason Kroh started 10 times when Leininger was unavailable and led the Cardinals to nine victories. Now that Kroh is about to begin his junior campaign, the No. 1 job is his — although freshman Carson Lengle is making a strong push. “(Lengle’s hunger) sort of gave Mason his second shot of gas,” Gaffney revealed. “He realized that this kid’s hungry and he wants to play. He’s 6-1, 180 and he’s one of the fastest athletes we have. His whole thing is confidence. … He’s always been in the shadow of Leininger, but he’s starting to realize that ‘my offensive line is solid, my running back and wide receiver corps is great. He now has to take that step of, ‘I’m the starter. I’m the dude. It’s my program.’ And he’s only a junior. He’s the real deal. He can run the ball. He can throw the ball. It’s his time to take the program over.”