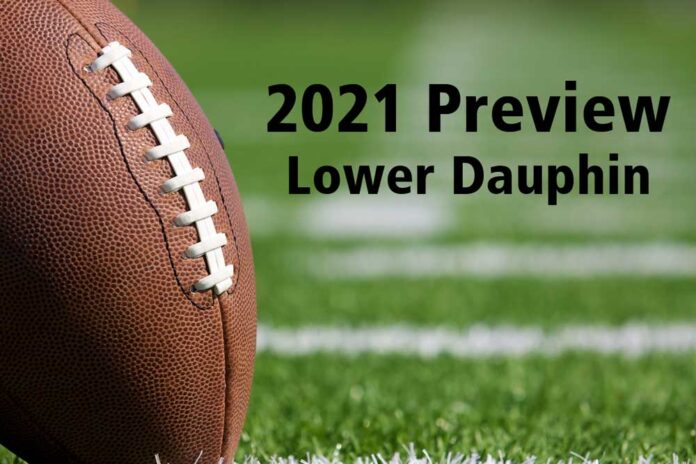 OUTLOOK: Having the right players can make all the difference in the world, but sometimes having the right coaching staff in place can have just as much of an impact. Borreli has already proven himself as a skilled assistant at the college level, but he faces a unique challenge taking on a struggling high school program at LD. There is no recruiting for public high school football, nor are there depth charts that go four to five players deep. You have to work with what you have. The good news for Borreli is he does have some talent to work with. With a thin roster, though, success of the program will rely on the coaching staff’s ability to capitalize on the team’s strengths, while trying to disguise the weaknesses. The Keystone can be a meat-grinder, but if the Falcons can stay healthy, and if Borreli can pull the strings just right, there is plenty of reason to believe the team can improve upon last year’s 1-5 campaign.

3 THINGS TO KNOW
1. Falcon Pride
The Lower Dauphin football program was in a much different place when Josh Borreli took his turn as a Falcons player in the early 2000s. Borreli now begins his head-coaching journey with an LD team that hasn’t had a winning season since 2015. “The pride in being a Falcon is what brought me back, and I want to bring that back to the kids on the squad,” Borreli said. “I grew up in a time where LD was kind of a powerhouse team. We’re a blue-collar, hard-working school, but we haven’t had that aura out recently.” Turning a program around is no easy task, but Borreli brings with him a wealth of college coaching experience after stops at Lebanon Valley, Western New England, and most recently a four-year stint at Shippensburg. Similar to the college level, Borreli’s coaching staff includes at least one coach per football position. “I’m a big culture guy, to be honest, and the culture of of football, like how to create a team, is what draws me to the game,” Borreli said. “It all starts with our three foundational principles: Brotherhood. Integrity. Grit. … Success might not come overnight, but we can set the precedent this year for who we will be for years to come.”

2. Small in numbers, Big on skill
With 45 players on the roster, Borreli’s squad isn’t as deep as he’d like it to be, but there is enough talent returning for the Falcons to make an impact in the Keystone. Lower Dauphin returns its top playmakers in QB Braden Landis, as well as RBs Ethan Miller and Jake Kauffman, who combined to rush for 100 yards/game last season. Borreli likes what he sees from sophomore Ty Millhimes, who can both run and catch, and is excited to see what 6-foot-5 tight end Ryan Angerer can bring to the table in his senior year. Look for Charlie Fortney, a junior wide receiver, to ink his name into the stat sheets as well. If the offensive line — led by Aaron Moyer and Blake Kelley — can generate any push, LD should be able to put some points on the scoreboard this season. “We’re going for a balanced multiple attack, and being able to adjust from game to game will how good our offense actually is,” Borreli said. “We’d like to be able to run the football as well as use our assets in the passing game.”

3. Knowledge is Power
When you’re rolling with a small roster, it’s essential for the players on the field to know the situations and where to be. Versatility helps, too. Borreli believes his defense carries both of those qualities, with enough hybrid players to shift around the lineup as needed, and the smarts to use an expanded playbook. LD will be looking to Max Klingensmith, a senior safety, to provide the leadership for the defense. “Max is kind of what makes the whole wheel go round,” Borreli said. “He gets all our checks, keeps all our personnel in place, and he’s a guy that’s very, very talented, but has had injuries for the last two years. The Mid-Penn hasn’t gotten to see him yet, but he’s completely healthy now and ready to go.” Borreli says he’s looking forward to seeing what DE Ryan Angerer can do this fall, and that junior Aidyn Gingrich, listed as an OLB, provides some flexibility to the defense. He’s also high on “two guys that have been around for a few years” in CB Charlie Fortney and LB Jaquan Murphy. “I feel really strong about our defensive group, and think that our core defensive personnel is strong and very smart,” Borreli said. “We’re very versatile and that gives us a lot of flexibility to how we defend different types of personnel.”