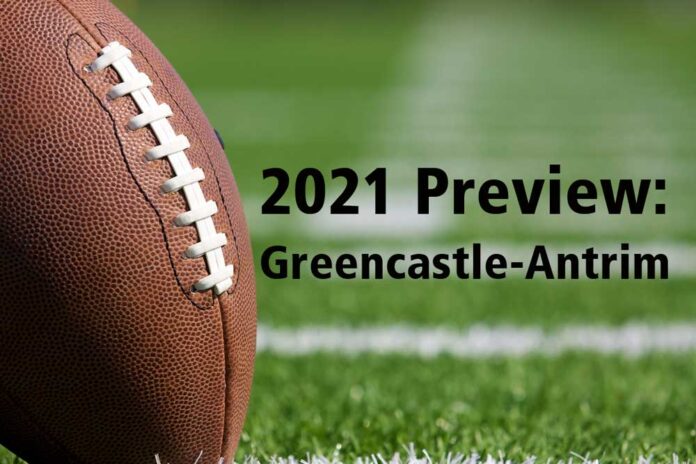 OUTLOOK: Optimism is high for a Greencastle-Antrim program trying to return to its winning normalcy of the early 2000s, when it logged 11 straight non-losing seasons from 2005-15. Getting back to those glory days, however, will be much easier said than done. The Colonial is chock-full of hard-nosed teams with playoff experience. The Blue Devils have their own fair share of talent and varsity experience, but there’s a chance the team could play its best football in years and still finish with a three-win season. Greencastle, which took big steps to be competitive within the division last year, needs to continue to make strides to turn those close losses into wins. From Week 1 to Week 10, coach Devin McCauley said to expect “10 fistfights.” The odds seem to be stacked against the Blue Devils, but if there is any Greencastle team equipped to snap the streak of five straight losing seasons, it’s this one.

3 THINGS TO KNOW
1. Respect is earned
When the coaches’ votes were tallied for the Colonial preseason poll, Greencastle was picked to finish eighth out of eight teams. That’s a tough pill to swallow for a Blue Devils club that returns many starters and was competitive in almost every game during last year’s 2-5 campaign. On one hand, Greencastle has every right to feel disrespected, but on the other hand, the Blue Devils are also seeking their first winning season since 2015. “I don’t think we’ve done enough to get the respect that we have to earn,” McCauley said. “If we take care of ourselves, I think we’ll be alright.” The Blue Devils skipper is counting on leadership and playmaking from a group of seniors that began their high school careers at the same time McCauley took over the program. That senior class — which includes captains John Redos, Taylor Conrad and Ethan Shank — is eager for a season of success after years of taking lumps. “A lot of those kids played early as sophomores, took their lumps and have kind of grown through that,” McCauley said. “These guys know the system and the expectations. I’m happy to see how they’ve grown and matured.”

2. Triple-threat offense
It’s no secret that the Colonial Division loves to run the ball. That’s A-OK for a Greencastle squad that returns its entire backfield, as well as three starters on the offensive line. QB Taylor Conrad and RBs Tavon Cooper and David Niebauer are all looking to make an impact in their final year of high school football. Cooper is a speedster, Conrad is a talented athlete and Niebauer is a solid downhill runner. Three different styles of running should create challenges for opposing teams, who also have to figure out a way to get around the Blue Devils’ offensive line, one that McCauley calls Greencastle’s “best in years.” The trenches will be led by John Redos, Gage Smith and Jake Kumfert, who checks in at 6-foot-5 and 315 pounds. Add to the line another 315-pounder in Elijah Britner, who doubles as Greencastle’s nose guard on defense, and the Blue Devils’ running attack has the potential to rack up some major yards this fall. “If you can run the rock to shorten games and control the clock, that’s a good thing,” McCauley said. “It helps the defense, too. It’s complementary football.”

3. Improved special teams
Last season, McCauley had plenty of good things to say about his kicker, Nathan Kirkwood, one of the bigger college prospects you’ll find in the Colonial. The only problem was that Kirkwood did not get many opportunities to showcase his talent. There were protection problems and issues with getting the ball from the long snapper to the holder to the kicker. There was a light at the end of the tunnel, however, when Kirkwood drilled the game-winning field goal in a season-ending 23-21 upset over East Pennsboro. Kirkwood is back for his senior season, and with a little more help around him this time around, don’t be surprised if McCauley marches him out to attempt field goals of 50-plus yards. “Kirkwood is a Power 5 talent,” McCauley said. “He’s a weapon, who can also put the ball into the end zone on kickoffs. That gets overlooked. He’s playing at a high level right now.”