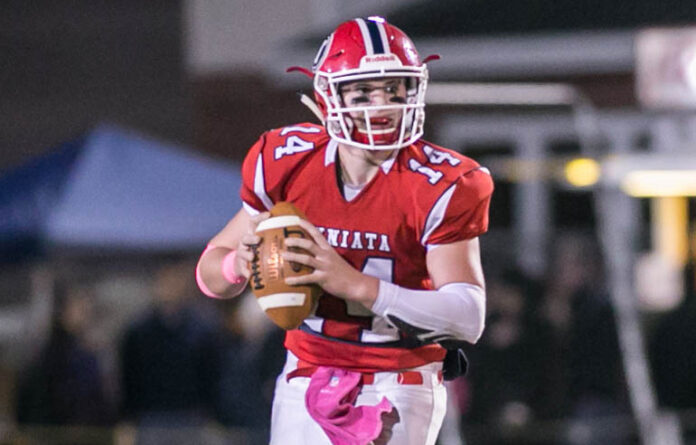 Postseason: Lost to Clearfield 35-7 in District 6/9 Class 4A semifinals.

Outlook: With a number of veterans still on hand, Condo’s Indians hope to reverse some recent trends and make a legitimate run at whatever Mid-Penn Liberty crown is contested since not everyone is playing one another. Having Jacob Condo directing traffic is one bonus because he can beat you with his legs and his arm, yet don’t be surprised if the wonderfully athletic Manny O’Donell has plenty of success catching the ball against Liberty corners and safeties. A battalion of squat linemen — a Juniata constant — also returns even though the Indians likely will line up with two guard-sized backs ready for short-yardage duty or to create space for Condo and all-purpose back Caleb Seeger. If Juniata can ride out a four-game road trip at season’s start that includes Middletown, Lower Dauphin and Newport, the Indians will be OK.

1. Now in Year 2, Condo slowly making changes: Entering his second campaign in charge following nearly two decades working alongside Gary Klingensmith — Klingensmith won 300-plus games during his 50 seasons at Juniata — Condo admits to altering a few things as his transition to skipper continues. Yet, while COVID-19 has made getting the preseason underway similar to the stops and starts that used to make driving through the Lewistown Narrows nothing short of a nuisance, Condo & Co. are trying to persevere by adjusting a few things, including some schematic redesigns on both sides of the football. “I learned quite a bit my first year as a head coach, and I spent a lot of time with my staff during the offseason sort of evaluating what our goals were and how we were going to get there,” Condo said. “One of the things I think we did pretty quickly was just sort of simplify things for the kids in terms of the X’s and O’s. To be successful at the high school level, I think you’ve just got to let the kids play. Let them play. Let them do what they’re good at doing, and don’t let them overthink. At the end of the day, high school kids are just high school kids. These aren’t all college athletes, they’re not NFL athletes. You’ve just got to give them opportunities to do what they do well. So, that was our main thing — how can we make these kids try to truly play to their potential?” One particular example is Condo and his staff implementing a route tree, providing opportunities for receivers to choose Option No. 2 and Option No. 3 if the primary option is defended well and unavailable. Film will show some other wrinkles.

2. Another Condo ready to go at a prominent position … and then some: Full of want-to and a desire to succeed, junior quarterback Jacob Condo will be parked atop defensive coordinators’ must-stop lists as they try to design schemes intended to slow down a kid who can run it and throw it. What ups the degree of difficulty considerably is the younger Condo is about to go behind center as starting QB for the third straight season. And that’s quite a luxury for coaches at the high school level — whether he’s the skipper’s son or not. “What I’ve seen from him the past two seasons is he’s very calm and he can make rational decisions. And generally, he’s usually right decision-wise with what he does on the field. He’s also very smart. He’s like having a coach on the field,” the elder Condo said. “He’s been around football his entire life. He went to his first college football game when he was like four or five weeks old.” The Mid-Penn Liberty coaches also know what they’re about to encounter, because the younger Condo was tagged the seven-team loop’s preseason offensive player of the year, according to PennLive. “It’s nice to get that little bit of respect and recognition, but my words to him were ‘preseason does not mean squat,’” Kurt Condo said. “I know one of his goals this year is to make more of an impact on the team defensively. That’s one thing that he didn’t do a lot of the last two years, but he’d probably play every two or three series on defense. … He wants to win and I can appreciate that. He would trade in any yards passing or any yards rushing or any touchdowns for a victory.” Just guessing that’s his DNA bubbling to the surface.

3. Plenty of Friday night bus rides still on tap: While COVID-19’s presence impacted Juniata’s preseason preparations — even dating back to last spring when schools were shut down — a peek at the Indians’ regular-season slate displays a heavy load of difficulty. Try four straight road games starting with a jaunt to suburban Harrisburg to scrap with three-time Class 3A state finalist Middletown. For a Juniata program that last season returned home from seven road scraps with just one positive result, that’s a significant nugget that needs to be reversed, and Condo hopes to do so quickly. “I think we just need them to believe in themselves. We need them to come together and gel together and sort of fight for one another and with one another. We just want everyone to have good positive thinking and vibes,” Kurt Condo said of trying to erase the sting of two straight losing seasons. “Last year we didn’t play real well on the road, so that is a concern starting the season playing four straight road games and two home games overall at the end of the year. It’s gonna be a test. That’s the nature of it, that’s the challenge of it. Hopefully, these guys will rise up to it.”