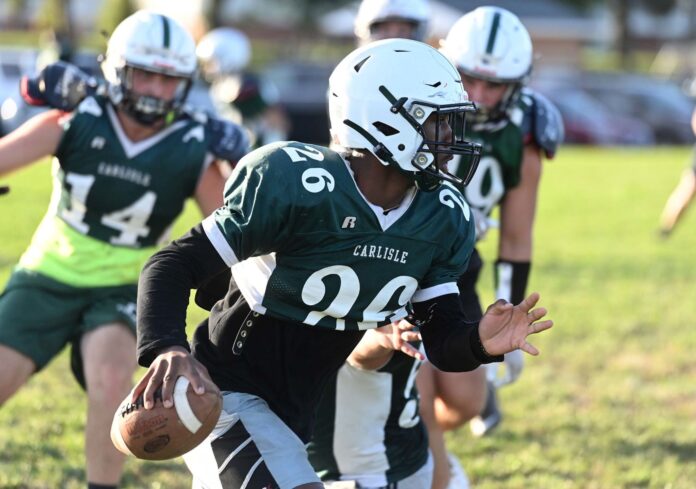 Outlook: It looks like the “EZ” Thomas era is about to begin, unless someone beats out the uber-athletic sophomore for the starting job under center. Don’t heap a ton of expectations just yet on the young QB — the Commonwealth is a murderer’s row of defenses, one that feasts on new starters more often than not.

With Harrisburg bowing out this season, the Herd picked up Exeter Township for the season opener at Ken Millen Stadium. That’s a District 3 Class 5A semifinalist on a schedule that only includes Commonwealth foes. There will be no easy games this year for a squad breaking in a new QB with unproven weapons surrounding him. The Herd won’t have much time to mature together, but that’s true for every team this year.

1. Second coming of Clem?: Head coach Brett Ickes hasn’t been shy to compare sophomore Ezeekai Thomas to former Carlisle standout QB Clem Johnson, an athletic signal caller who went on to play at North Carolina State and then the CFL’s Hamilton Tiger-Cats. Now we’ll get to see if the high praise holds up. “He’s a great kid, he’s very athletic,” Ickes said. “Very Clem-like in athleticism. He’s a kid I know he doesn’t get rattled.” Thomas is expected to take over under center this year unless Bishop McDevitt transfer Victor Patterson, who also plays receiver, beats him out. If not, Carlisle could have the most stability it’s had at the position in years. He also has a veteran offensive line that has the potential to keep him upright. Jeremiah Carothers is the mammoth, athletic headliner of the group. Then there’s his brother, Elisha, Christian Good at tackle, Layton Schmick at center, Charlie Dib, Austin Coldren, Thomas Neilson and others. Ickes doesn’t know who will be the starting five, but he could also utilize a rotation. Whoever it is, it’s one of the bigger, stronger lines they’ve had in some time, which is a rookie QB’s dream.

2. The weapons are an enigma: For the second year in a row, the Herd have to find a solution at WR. Then there’s the loss of 1,000-yard back Tristyn Sulich, a bruising runner who is not easily replaced. Who steps up and how well will go a long when in determining if the offense proves potent. In the backfield, Sean Smith and Braydon Keller are likely to be the top two guys, and Ickes also expects Darren Curry to get some touches. Flanked out wide will be Matt Trolinger, Patterson (or Thomas), plus Dylan Young, a basketball player who hasn’t played football in a few years but provides much-needed soft hands after the position was plagued by drops last year. “In our league, if you can’t throw the ball when they put nine guys in the box, you’re in trouble,” Ickes said.

3. Defense up front a strength: That o-line mentioned before? That same group is back to anchor the defensive line as well. And the linebackers return some veterans, Ickes said. “The biggest problem right now for us, biggest question mark, is receiver and defensive back,” he said. Thomas is the only returning starter out of a DB group that got torched for 14.3 yards per pass attempt last year. But the hope is the front seven improves on its 5.9 yards per carry allowed and generates pressure on the QB to ease the burden on the rebuilt defensive backfield. Doing so might just mean the difference between a win and a loss in this condensed season.