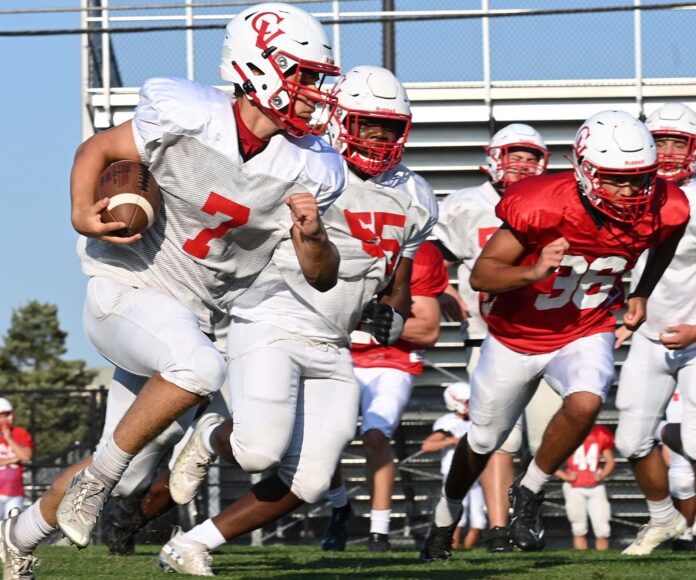 Postseason: Lost to Manheim Township 32-26 in District 3 Class 6A quarterfinals.

Outlook: Oswalt is staying coy about the offense he’ll run this year, but if his track record says anything, it’s that the Wing-T will be officially retired at CV in 2020. How much of his patented no-huddle spread he brings to his alma mater is unclear, but the Eagles will likely be more dynamic on that side of the ball. It’ll be interesting to see how quickly the team adapts to the changes in a truncated season with just four playoff spots available. Does it translate into more wins against the Commonwealth’s elite (which CV prides itself in being a part of)? That’s the plan.

A lot of the team’s success in the win column will depend on health (true for every team, especially this year), the offense coalescing quickly and the defense’s new parts stepping up in big ways against big, strong, challenging opponents.

1. New coach, new scheme, new challenges: It can’t be easy to take over a new team in the middle of a pandemic. But Oswalt, one of two new skippers in Cumberland County this year, arrives with a leg up — he’s a CV grad and already has proven himself capable of quickly leaving his mark during his previous two stops at Carlisle and Central York, where he established dynamic no-huddle spread offenses. Oswalt joked repeatedly this summer he might run the Single Wing with CV this year. No chance that happens. Still, he’s spent the last few months socially distanced, trying to quickly install his offensive and defensive schemes. It’s not easy, but preparation has helped. “What people don’t understand — maybe they do — we are so to-a-tee organized and [regimented],” Oswalt said. “There’s no playbook for how you’re supposed to prepare your kids. … The big thing I’ve learned is always going to practice with a positive mind.”

2. Who benefits most? Quarterbacks: Oswalt’s offenses have a track record of producing good quarterbacks. At Carlisle, Billy Burger landed an offer from Dickinson and Eric Harris tried to walk on at Penn State. At Central York, Cade and Beau Pribula developed into Division I prospects. Now it’s Alex Kovach who stands to benefit. “Kovach is looking good, he’s really progressing,” Oswalt said. “He has grown a ton. He benefited from the pandemic, he benefited from being home March, April, May, June. … He doesn’t need the affirmation, he doesn’t need the pat on the back, but he needed to find confidence in himself.” But Kovach has to secure the job first. Oswalt told all the seniors he’s not reserving spots for them just because they’re seniors or started last year. The same stands for Kovach, who is being tested by junior JT Mazzie and sophomore Isaac Sines, Oswalt said. He’s been impressed by how all three have competed and worked, in Zoom meetings, practices and even video games, which have proven an entertaining source of bonding for the group and the team.

3. On the lines: There’s going to be some changes in the trenches. The offensive lineman have to adjust after years of perfecting blocking technique for the Wing-T. Oswalt said “what fit for a Wing-T lineman might not fit for our offense,” but he feels good about the seniors in that group and the underclassmen depth. Defensively, Oswalt feels confident the Eagles can run rotations of 3-4 players at d-end and d-tackle, always a plus for a program. “[Defensive line coach Jordan Hill is] excited about a handful of guys on the defensive front,” Oswalt said. “He feels like we’re able to do more than we thought we would be able to do before we met them.”