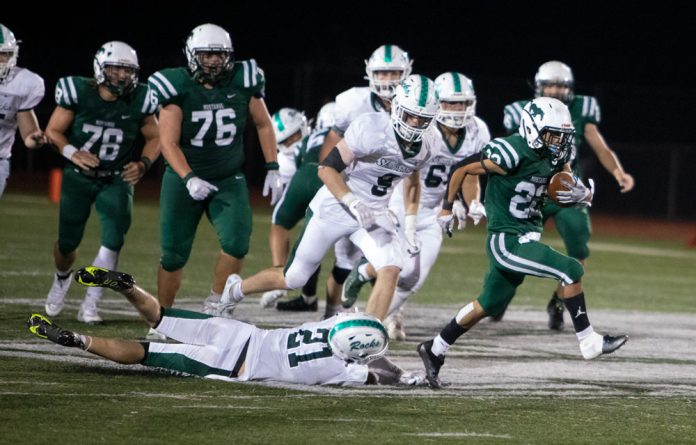 Earlier in the week, West Perry quarterback Marcus Quaker was on 4th Down Magazine’s The Spotlight and he made what seemed like a bold and brash statement that if the Mustangs offense plays well this week, his expectation as the starting quarterback is they should score 40-plus points against Trinity.

The junior QB1 for the Mustangs was spot on in his assessment of what West Perry is capable of offensively. Sure there was a 96-yard pick-6 by triple threat weapon WR-DB-K Ian Goodling that helped the cause. The bottom line is West Perry owned the line of scrimmage and ran the rock 50-plus times for more than 300 yards that pushed the T-Rocks’ losing streak to three straight with a four-score victory.

Slightly undervalued all season, West Perry’s defense put in another stellar effort and played a much bigger role in this triumph than a final score would indicate. The Shamrocks were limited to fewer than 100 rushing yards and only five first downs, and the Mustangs produced four turnovers. RB Trent Herrera paced West Perry with 164 yards and a couple of scores on the ground. Quaker added 182 total yards (97 passing, 85 rushing) and a touchdown. Goodling added a pair of field goals, including a 45-yarder just before halftime that made it 20-0, to go along with his momentum-changing interception in the second half.

There’s still more scheduled meat on the bone for the undefeated Mustangs in the coming weeks, but over the course of four weeks, West Perry has shown it has plenty of tools in its chest to compete with anybody in the Mid-Penn Capital Division.

Northern York added another level of chaos to the Colonial Division by ending a two-game slide and getting back to .500 overall with a physical 17-6 win over previously unbeaten Shippensburg. Cole Bartram rushed for 151 yards and a touchdown and the Polar Bears’ defense was a difference maker.

The only undefeated team in what is shaping up to be another version of the Crazy Colonial Division … those Greencastle-Antrim Blue Devils! Powered by an offense that scored 35 or more points for the third consecutive game, G-A dropped the Indians to 1-3 overall with a two-score victory.
Cumberland Valley stayed unbeaten and showed exactly what a comfortable and confident team looks like by racing to a 17-0 advantage after the first quarter on its way to a comfortable win over CD East. QB Isaac Sines continues to be a dual-threat catalyst for the Eagles – posting four more touchdowns with a pair each passing and rushing. Next up for CV is Harrisburg.

Speaking of the Cougars … their head coach, Calvin Everett, returned to the sideline after his three-game suspension and his squad responded with a 29-point drubbing of Carlisle. Big-play weapon Kyle Williams had three touchdowns and 161 total yards. This was the expected response from a Harrisburg team that was upset a week ago by Manheim Township on its home turf.

Central Dauphin avoided dropping to 0-4 by outlasting Chambersburg 42-35 in a back-and-forth affair. Led by senior RB David Chase and his 164 yards and three touchdowns, the Rams picked up win No. 1.

Altoona and State College squared off in a battle of Commonwealth Division unbeatens, and the Little Lions showed their pedigree and firepower with a 55-point explosion in a cruise-control victory. Freshman RB D’Antae Sheffy continues to shine for SC, adding another 125 yards and three touchdowns to his running total on only 13 carries.

Steel-High quarterback Alex Erby has been a little quiet by his standards to start this season. His response on Friday night was 374 yards and seven touchdown passes as the Rollers put up 74 against Boiling Springs.

Big Spring is clawing back from a rocky start and reached .500 after four games by handing Camp Hill its first loss of the season in a low-scoring affair that saw only 22 total points put on the board. Defense was the story in this one and the Bulldogs limited Camp Hill to a single touchdown and only 219 yards through the air. This isn’t a “bad loss” for the Lions in any way, shape, or form.

Mechanicsburg picked up its first win by scoring a season-high 34 points to edge Susquehanna Township. On a night when the Wildcats defense surrendered 27 points and was unable to be the rock for this team, the offense came alive behind QB Jeff Lougee and the return of RB Parker Sample to the lineup.
Gettysburg is 3-1 overall in its return to the Mid-Penn Conference and picked up its first division win of the campaign by dominating previously unbeaten East Pennsboro in a Colonial tussle. The Warriors limited East Pennsboro to 162 total yards, scored 27 unanswered points after falling behind 3-0 early in the second quarter, and did not have a turnover. RB Jayden Johnson was the workhorse with 145 yards on 24 carries with a touchdown.

A trio of Thursday evening games produced the gamut of results. Bishop McDevitt, as expected, had no trouble with Palmyra and cruised to a 49-3 triumph. The Crusaders defense registered a pick-6 and a whopping 16 tackles for a loss. RB Marquese Williams galloped for a season-high 216 yards and three touchdowns to power the offense.

Hershey’s upset of Cedar Cliff was well earned and with four minutes to play looked nearly improbable. The Trojans were facing third-and-18 from their own 6-yard line trailing the Colts by six. Hershey QB Daniel Painter connected with Marcus Sweeney down the sideline for a 94-yard catch-and-run score that coupled with a late defensive stand propelled the Trojans past the Colts 21-20. Cedar Cliff led this one 17-0 at halftime.

Mifflin County flexed its muscle and rode a defense that revealed a 2-2 Lower Dauphin squad has some serious challenges to overcome offensively to be a winning team. The Huskies rolled LD 28-7 and improved to 3-1 overall.