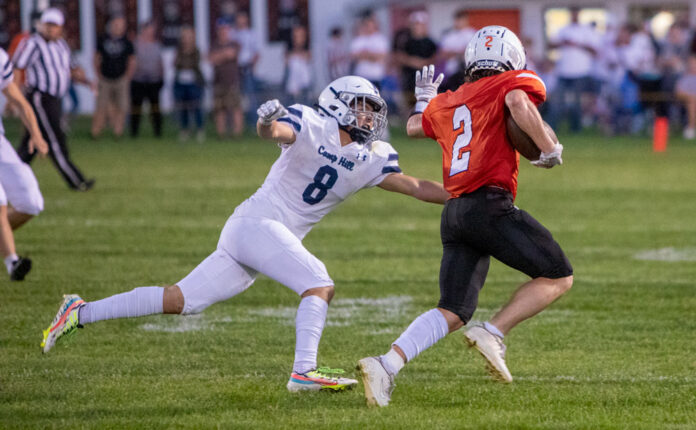 Bishop McDevitt put a bow on head coach Jeff Weachter’s 250th career victory by going on the road and thoroughly dominating a quality big-school opponent that sent a clear message.

Powered by its multi-weapon offense, the Crusaders unleashed the full arsenal on La Salle College in the first half with six touchdowns that sent this game to mercy rule by intermission.

This was a message sending performance for a team that dropped a tight opener to Imhotep, the No. 1 ranked Class 5A team in the state, two weeks ago. McDevitt’s game last week was lost to COVID-19 on the West Toronto Prep. Two weeks of pent up frustration squarely landed at the Explorers’ front porch.

Running back Cyncir Bowers eclipsed 100 yards rushing and receiving and chipped in three touchdowns. Crusaders QB threw for 246 yards on only nine completions. This big-strike offense has found its comfort zone again.

Manheim Township pulled off the biggest upset of the season Saturday after the Blue Streaks coughed up a two-score lead then rallied in dramatic fashion in the final 30 seconds to take down the Cougars.

For the second time in as many outs Harrisburg was sluggish coming out of the blocks, trailing 17-6 in the third quarter. A pair of stretch-run touchdown drives appeared it might pluck another victory from the jaws of defeat, but MT quarterback Hayden Johnson delivered in the clutch. With no timeouts inside the final 30 seconds, Johnson threw back-to-back completions covering 17 yards to finish off the winning drive.

Harrisburg had this game in its hands late. The Cougars had the ball with 3:46 to play. A couple first downs would have wrapped up another come-from-behind victory. Three-and-out and a punt handed control of this one over to the Blue Streaks.

Cumberland Valley continues to be the biggest surprise of 2022 heading into the capper for the first month of the season. Eagles are unbeaten with three wins over quality opponents (Manheim Township, Central York and Spring-Ford). By the middle of the third quarter CV had built a 28-8 lead against the Rams thanks to a defense that bends some in the passing game, but doesn’t break as often as the numbers say it should.

West Perry has surged to 3-0 and revealed its full potential this season by thumping tough-to-beat Juniata. The Mustangs’ main weapons – QB Marcus Quaker and RB Trent Herrera – delivered again. That wasn’t unexpected. The West Perry defense pitching a shutout and limiting Juniata to fewer than 100 total yards is a difference maker. The combo of plenty of firepower offensively backed up by a defense that can hold serve is a lethal combo. The win was No. 300 in the program’s rich history.

Camp Hill also has three wins in as many games after nudging past Upper Dauphin. The Trojans’ bully Wing-T offense was shut down by the Lions defense and for the second week in a row Camp Hill won a game scoring four or fewer touchdowns.

Central Dauphin East cruised past Northeastern as expected to win for the second time in three games. District mate Central Dauphin fell to 0-3 after a solid effort overall against Coatesville came up short. Panthers have played two soft opponents while the Rams have played all high-quality opponents. Bottom line is results, though, and CD winless is a very different look.

We had concerns about Boiling Springs and the quality of its opponents the opening two weeks with all those points the Bubblers were scoring. With the playing field a little more level the result of Gettysburg posting a 35-20 victory makes perfect sense. Warriors have a solid 1-2 punch at RB and QB and the Bubblers are restocking the shelves.

I had to double check a couple editions of standings to make sure it was indeed true that East Pennsboro is 3-0. The Panthers have quietly taken care of business without a lot of flash and noise. That’s a refreshing change over a year ago when highs and lows for the Panthers was extreme on both ends. EP defense has allowed one touchdown over the last eight quarters against Palmyra and Milton Hershey.

York High came into Week 3 with a couple close losses while Carlisle was flying high with back-to-back wins. The Bearcats and Herd combined for more than 100 points and the final dagger was delivered by York. When your offense scores 47 and you lose, that’s a bad loss all the way. Was this a one-game thing or does the Herd have a weakness on defense?

A couple quick hits that stood out … Trinity put up a respectable effort in falling to Wyomissing by three touchdowns. Best 1-2 in the Mid-Penn is the T-Rocks … Northern is 1-2 after losing another close one but the Polar Bears have undefeated Shippensburg on deck and a season of so much promise has fizzled with losses to Chambersburg and Dover. … Greencastle-Antrim is 3-0 and just took Delone Catholic out behind the wood shed with a 35-0 drubbing. Don’t get caught napping on the Blue Devils.

Cyncir Bowers, RB, Bishop McDevitt: Bowers proved on Friday night he’s no second banana in a Bishop McDevitt backfield, topping 100 yards in both rushing and receiving and tallying three total touchdowns in a 56-7 win over La Salle on Friday.

Tavon Cooper, RB, Greencastle-Antrim: Cooper continues to prove he’s one of the best running backs in the Mid-Penn, taking 11 carries for 132 yards and scoring a touchdown in a 35-0 win over Delone Catholic.

Colton Hoffman, RB, Red Land: Hoffman started the game slow for the Patriots, but ended up with a strong 27 carries for 139 yards and a touchdown in a 16-14 win over Mechanicsburg.

Jayden Johnson, RB, Gettysburg: The Warriors running back had a field day in a 35-20 win over Boiling Springs, taking 19 carries for 163 yards and a score.

Luke Parise, LB, Camp Hill: The star baseball player has proven to be a menace on the gridiron this year, and had perhaps his best showing of the year on Friday in a 26-12 win over Upper Dauphin, recording 21 tackles, two tackles-for-loss and a sack.

Bennett Seacrest, QB, Cedar Cliff: The new Colts quarterback was nearly perfect on Friday in a 44-0 win over J.P. McCaskey, going 13 of 15 for 159 yards and five touchdown passes.