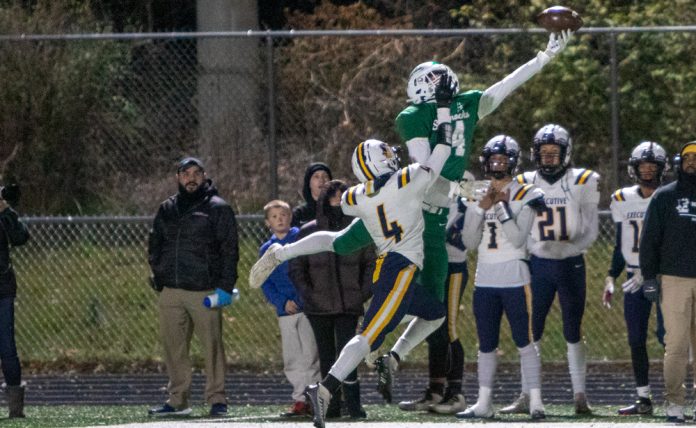 Back in September when Trinity was in the middle of what seemed like a death spiral to its 2022 season, second-year head coach Jordan Hill was quoted by PennLive’s Eric Epler after the game with words that stayed in my head when it came to the Shamrocks’ season.

Hill, a one-time prep star at Steel-High who shined at Penn State and was a third-round draft pick in the NFL, has all the football chops any coach could ever want when it comes to delivering a message. Hill and his talented coaching staff knew talent wasn’t a problem. But talent is only part of the equation when it comes to success at the highest level.

Trinity had just been drilled 40-14 by an up-and-coming West Perry team to drop its third game in a row. In fairness, the other two losses were to big-school hammer Roman Catholic and still-undefeated Wyomissing. Against the Mustangs, Hill knew his T-Rocks were a no-show and he didn’t mince his words on what he was seeing.

“Effort. Our effort and toughness and heart. There was none,” Hill said. “It’s simple. Effort. All the other stuff you can fix. If you don’t want to give effort, I can’t help you. That football team over there (West Perry) wants to go out there and play football for each other and play the game the right way. Right now, we are not.”

Trinity was 1-3 and had reached its breaking point on how this season was going to go. Hill knew it and told his team exactly what it needed to hear.

Since that loss to West Perry in Elliottsburg, Hill and the T-Rocks have gone 10-1 overall. The only setback was a tough one-score loss to Steel-High in a game the Shamrocks had every right to believe they could have won.

And after a furious second-half rally Friday night at COBO Field in Shiremanstown, Trinity is headed to the PIAA Class 2A semifinal round to play Southern Columbia after knocking off District 11 champion Executive Academy.

This will mark the first time in program history the Shamrocks will play in a state semifinal contest. Going up against 22-time state semifinalist and small-school kingpin Southern Columbia.

From my seat, this magical season is tied directly to how this team responded to a simple challenge from its head coach when Hill said “If you don’t want to give effort, I can’t help you.” Talent can be coached, shaped and molded on the practice field. Effort is the one area coaches won’t openly admit but know is not in their direct control.

Full credit for this talented group of Shamrocks for taking control of their season and making history. It was a bumpy ride for a reason, though. And don’t think for a second it will take a miracle for the T-Rocks to reach the state title game. They have the talent to match up with the Tigers. …

This was supposed to be the test everyone thinks Bishop McDevitt needed since an opening weekend loss to Imhotep Charter. The 18-time District 3 champion Manheim Central was supposed to make this Class 4A championship game at The Roc a competitive affair.

The Crusaders didn’t fancy a test, though, and made the title game look like every other game since Week 1 on almost every front. When talent at this level meets execution at a high level the opposition, even a quality Barons side, has zero say in the outcome.

This was the 16th district championship in program history. The offense, as per usual, flashed its big-play power, but it was the defense that drove the engine of this train that flattened the visitors from Lancaster County.

Marquise Williams, Rico Scott and Stone Saunders all did their part to put points on the board and set the tone. And the defense took over and put up a wall that limited Manheim Central to 64 total yards and six first downs on the night.

McDevitt winning the title was almost a foregone conclusion. Making the Barons as ordinary as another Keystone Division opponent on the schedule is impressive.

Chalk up a second consecutive District 3 Class 6A championship for a Harrisburg team that has rode the waves of an up-and-down season but is dominating in the playoffs. The Cougars avenged an early season loss to Manheim Township by cracking the Blue Streaks by 38. …

The Cougars have outscored their two playoff opponents, Central York and Township, by a combined total of 88-13. Next up is fellow Mid-Penn Commonwealth Division mate State College. The undefeated Little Lions put the clamps on Harrisburg 20-6 in their October meeting. Feels like this is a much different Cougars team than even six weeks ago when Harrisburg and State College traded paint. …

Steel-High pulled off a magical rally to edge District 11 champion Northern Lehigh to keep the Rollers’ hopes for a Class 1A state championship alive.

The Rollers used a 20-yard touchdown pass from quarterback Alex Erby to wide receiver Jaeion Perry with four ticks remaining on the clock to complete a furious fourth-quarter explosion that led to a 42-35 triumph. Steel-High outscored the Bulldogs 28-14 in the final 12 minutes.

Erby’s pass to Perry was the final points to push Steel-High across the finish line. But it was running back Ronald Burnette who kept the Rollers in the hunt.

Burnette led all rushers with 212 yards on the ground and three touchdowns on 20 carries. All this against a Bulldogs defense that had surrendered only four touchdowns in its last three games. All Burnette did was average 10.6 yards per carry. That’s how you win a game where 140-plus yards in penalties keeps the scoreboard tight.