Sunday Morning QB: Rollers claim 1A championship; Colts advance in 5A; Wilson knocks off No. 1 Central York and more 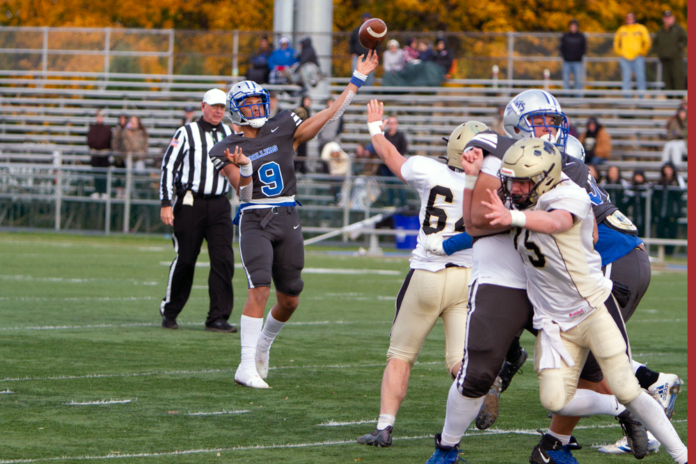 Dare we say Cedar Cliff went old school to solve the mystery of how to beat Shippensburg this season?

The Colts put up a defensive shell that limited the Greyhounds to fewer than 150 total yards, and Cedar Cliff handed the ball to stud running back Jontae Morris a staggering 40 times.

Morris responded with 202 yards, accounting for nearly 70% of the Colts’ total yards, in the 10-7 victory that pushed No. 6 seed into the District 3 Class 5A semifinal opposite Exeter Township.

Defense and the running game. Never a bad combination when it comes to the playoffs in Pennsylvania in November. Tough first loss for the Greyhounds, but the score says this game was a toss-up all the way.

The best player on the field in this game was always Morris, and he showed up in a big way.

This crazy lower half of the Class 5A bracket played out where Cedar Cliff will get a home game for the semis as the No. 6 seed. The Eagles are the No. 7 seed, proving what everyone already knew that this was NOT your typical seventh seed.

You could choose several results from the playoff slate and say they were surprising — Wilson edging Central York, York Catholic drubbing Upper Dauphin in the Class 2A championship game, Exeter Township easily dispatching of Manheim Central or Williams Valley doubling up Tri-Valley in the District 11 Class 1A championship game.

None of those results tops Wyomissing 14, Middletown 0. Nobody covered more ground the last six weeks of the season than the Blue Raiders. The defending Class 3A champs came into this matchup averaging nearly 48 points a game.

It was always going to be an uphill climb to score points against the Wyomissing defense, and getting shut out is not a surprise. Holding the Spartans to a pair of touchdowns speaks volumes in my book. It was a game for 48 minutes. The final result was probably never in doubt, but the No. 1 seed was never comfortable, either. That’s a job well done to first-year Middletown coach Scott Acri and his squad.

Harrisburg is going to the Class 6A championship game in what should be a surprise of nobody. The Cougars have been rock steady all season and are a team that simply doesn’t get moved off its spot easily.

Upstart Hempfield was hit with a couple early haymakers by the Cougars and never really offered any resistance the rest of the way in terms of impacting the outcome.

Kyle Williams, who finished with four touchdowns, landed the first one with a 78-yard punt return for a touchdown in the opening quarter, and Mahkai Hopkins, who eclipsed 200 rushing yards, followed up with an 88-yard run that made it 14-0 just past the midway point of the first quarter.

Harrisburg has played a pair of seven-win teams in the playoffs and won by a combined score of 69-17. The Cougars’ opponent in the title game is No. 5-seed Wilson. The Bulldogs have won seven in a row.

Bishop McDevitt rolled up more than 450 yards and 56 points in its District 3 Class 4A opener against Northern. Those were the yards and points the Crusaders had at halftime. I’ve seen my share of explosive offenses in 30 years of covering Central Pennsylvania high school football. Not sure this one is just about a weak schedule. Will Berks Catholic in the next round even provide a test? It’s a fair question.

As I’ve said for all of that offensive flash — and my goodness gracious there are a lot of options when it comes to offensive flash — I will continue to beat the warning drum on what the McDevitt defense continues to do on a weekly basis. The Polar Bears, a team that massively overachieved in 2021 with seven wins including a playoff victory, was held to negative yards the first half and finished with less than 50 total yards.

Boiling Springs is headed to the District 3 Class 3A title game and will face the same Wyomissing squad on the road in Berks County that blitzed the Bubblers a year ago in the first round.

A lot of players on this 2021 Bubblers team learned some valuable “next level” lessons in that game a year ago. Another crack is all you can ask for. For the second week in a row the Bubblers used a big second half to vanquish a playoff opponent. Two weeks ago it was 35 points the final two quarters against Lancaster Catholic. This time around it was 28 second-half points that put Hamburg away. Not sure Brad Zell’s troops can wait until the second half to find their groove against the Spartans.

Defending PIAA Class 1A champion Steel-High began the defense of its state championship by winning the District 3 title behind a big second half on Cottage Hill. The Rollers outscored Delone Catholic 29-13 the final two quarters to pull away for a three-score win. Rollers RB Daivin Pryor finished with 147 total yards on 20 touches including a receiving touchdown. Steel-High quarterback Alex Erby had three touchdown passes in the second half.

A few thoughts on teams who saw their seasons come to an end … Big Spring made history with the first playoff win in school history, which is still a monumental accomplishment. Lampeter-Strasburg crushed the No. 10 seed by 49 points and scored 63. Upper Dauphin was never in the game with York Catholic in the Class 2A championship game. The Trojans trailed 28-0 at intermission. Waynesboro couldn’t find enough offense to impact the outcome against Spring Grove. The Indians defense showed up and limited the Rockets to 21 points to keep Waynesboro in the game.