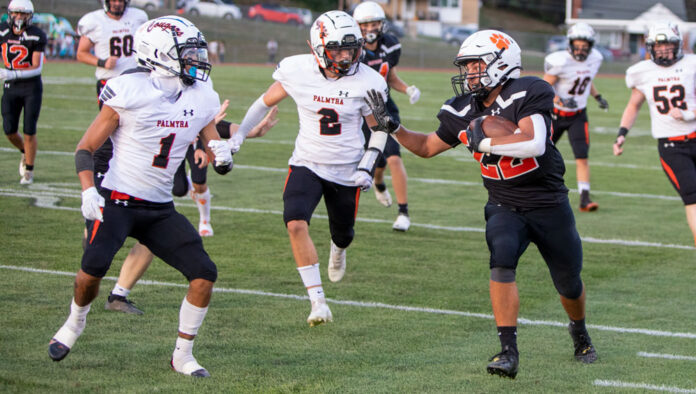 Camp Hill has definitely made some noise to start the 2022 season with back-to-back wins. Not a whole lot was expected of these Lions, so a 2-0 start qualifies Camp Hill as the early big surprise.

Quarterback Drew Branstetter will continue to power the Lions’ offense on a weekly basis. Throwing 50 times a game isn’t unrealistic. The Lions have the wideouts, it’s just a matter of getting enough consistent protection.

Branstetter and the Lions went on the road and took out perennial District 3 contender York Catholic 20-17 in overtime to drop the Fighting Irish to 0-2. Branstetter connected with Michael Shartle for the walk-off TD after the Lions’ defense limited YC to a field goal.

Defense is the hidden gem so far. Through eight quarters against Newport and York Catholic, the Lions’ D has surrendered three touchdowns. Look, the Lions’ meat of their schedule is coming in the stretch run. This good start helps the cause.

Susquehanna Township ended its double-digit losing streak by drubbing Northern Lebanon in a Thursday evening contest. The ‘Hanna Tribe scored 21 first-quarter points and cruised to its first victory since Oct. 30, 2020 when it upended West Perry. The Indians’ defense posted a shutout and allowed only 51 total yards.

Cumberland Valley surged to 2-0, and you know Eagles alumnus and head coach Josh Oswalt enjoyed this one just a little more beating his former program at Central York. Both CV wins have been tight squeezes, but winning 50-50 games is a complete difference maker.

The Eagles blasted to a 35-14 halftime cushion then held on for dear life down the stretch as CY rallied to score all 19 second-half points. CV senior quarterback Isaac Sines had another balanced outing, going for 206 total yards (112 passing, 94 rushing) and three touchdowns. RB Bryce Staretz chipped in with a team-high 114 rushing yards and a pair of first-half touchdowns. Going back to last season, the Eagles’ last three wins are over Central Dauphin, Manheim Township and Central York. Not too shabby.

Shippensburg extended its stranglehold on the Little Brown Jug by using big plays to hold off Big Spring by a couple touchdowns in the annual rivalry showdown. ‘Hounds QB Tucker Chamberlin completed only three passes, but those three completions covered 139 yards and two of them went for touchdowns. Erby Weller, the right guy to connect with, was on the receiving end of all three of those passes. Big Spring is now 0-2, but clearly the Bulldogs played better overall than in their opener.

The marquee shine was off this game, but for each program it was a must-have and Wilson edged Central Dauphin to get its first win of the season after getting blasted by Roman Catholic. This was a 50-50 game all the way, but the seminole moment was provided by Wilson RB Cameron Jones in the form of a tackle-breaking 53-yard TD scamper in the third quarter. The Rams, a desperately young and inexperienced team, are 0-2 and face Coatesville in Week 3. More likely the Rams are 0-3 than 1-2.

Four Colonial squads — Greencastle-Antrim, East Pennsboro, West Perry and Shippensburg — are all off to 2-0 starts. The Blue Devils waxed Berkeley Springs, from West Virginia, behind two punt returns for touchdowns by Austin Wyand. He now has three kick returns for touchdowns. The Panthers powered past Palmyra behind 116 yards and a rushing TD from Dakota Campbell. He also added a couple field goals. West Perry is the Perry County Champion for 2022 after dusting Newport behind seven total touchdowns (5 passing, 2 rushing) from quarterback Marcus Quaker. Waynesboro and Northern are each 1-1 and figure to have a say in this division, as well. The Indians edged Hershey despite Trojans QB Daniel Painter throwing for 253 yards, and the Polar Bears fell to Chambersburg by a touchdown.

Lower Dauphin played its first game of the season but is 2-0 thanks to a freebie win courtesy of the Middletown hazing debacle. The Falcons edged Twin Valley on a 24-yard field goal by Brandon Fritz with 79 seconds remaining to post a 17-14 triumph. Cedar Cliff grabbed its first win by holding off Mechanicsburg 16-7 in a defensive struggle. The Wildcats don’t have much offensive firepower, but they are difficult to beat. This is a quality win for the Colts.

Trinity was never going to beat Roman Catholic and all that firepower. But it was a good game for the Shamrocks to taste if they reach some of the lofty goals head coach Jordan Hill and company have for this team in 2022. That skirmish on the T-Rock sideline ended the game just past the halfway mark of the final quarter, but the result was already solidified. Still a fight to end any game shows a lack of discipline all-around from both clubs because it takes two to tango and reach that point.

Westinghouse QB Keyshawn Morsillo put on a show at Cottage Hill, accounting for nearly 350 total yards and four touchdowns as Steel-High dropped to 1-1 overall with a 21-point setback.