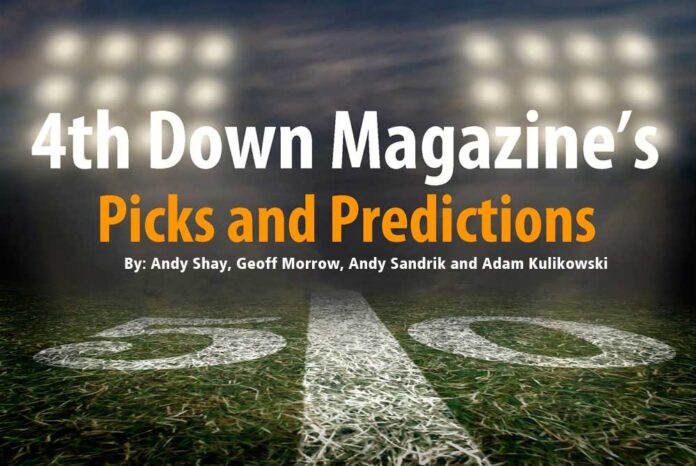 EXPLAINING OUR PICKS: The 4th Down Magazine crew picks all games involving Mid-Penn Conference teams, as well as Schuylkill-Colonial League games featuring former members of the now-defunct Twin Valley Conference. Starting with the state semifinals, our pickers get really bold and predict all the games. And, after 10 weeks of regular season and six weeks of playoffs, the season is officially over. Congrats to the six PIAA champs, all of the district champs, division champs, and everybody else who suited up and gave their all this season. Of course, we must also give a shoutout to Mr. Fourth Down, Adam Kulikowski, who somehow found time between his day job and working tirelessly to keep the Fourth Down Magazine website updated and running to actually WIN our picks title! The dude is amazing! (And he’s almost certainly going down next year because the Andys and the Geoff won’t stand for a repeat!)

Andy Shay: Steel-High 34, Union 20: Rollers are poised to prove for the second time in three years they are the best small-school program in the state. They have been pushed and tested this season and have grown into a complete team. Union is new to this stage and while the Scotties pack some punch on offense, they have a defense that has been exploited during the second season and the Rollers punish less-than-stellar defenses.

Geoff Morrow: Steel-High 42, Union 20: In their first ever PIAA title game, the Scotties haven’t exactly been stout defensively throughout their championship run (minus a shutout of Bishop Canevin in the WPIAL finals). A defense needs to be in tip-top shape to slow the Rollers, who are hunting their second PIAA title in three years and fourth since 2007. Not a homer pick; I just feel Steel-High is the best small-school program in the state.

Andy Sandrik: Steel-High 38, Union 30: Keep in mind these teams have a common opponent in Bishop Canevin. The Rollers escaped with a 21-14 in Week 1, while the Scotties recently blasted the Crusaders in the WPIAL title game. This game could be closer than the experts think.

Adam Kulikowski: Steel-High 35, Union 24: Rollers take a big hit in this one before kickoff with the loss of Durrell Ceasar Jr. and his 687 yards of pass-catching production to suspension. Doesn’t change my ticket. Gimme the Rollers as Class 1A state champs!

Andy Shay: Aliquippa 23, Bishop McDevitt 21: I fully agree with the Crusader players who have been saying “this team is different” than a year ago. It is better equipped for this game in so many respects. I do think the Quips, though, rightfully believe they are the better team heading into this one. Not often McDevitt gets to play the underdog card on its ledger. I think the Crusaders can 100% win this game, just not willing to pick them to do so at this level until they get one. Remember, a year ago McD hit the Quips with some haymakers early and Aliquippa just shrugged, went to work and dominated the rest of the way.

Geoff Morrow: Aliquippa 21, Bishop McDevitt 20: I don’t mean to predict heartache for the Crusaders, but here are my reasons: The Quips have won 25 straight games since Week 2 last year, which includes a victory over McD in the 2021 title game; Aliquippa, like McD, has thoroughly dominated competition this year, but its schedule was tougher; and the Quips are 4-4 in PIAA title games, while McDevitt has lost its last four since winning its only title in 1995. Regardless, this is a heavyweight fight.

Adam Kulikowski: Bishop McDevitt 35, Aliquippa 34: Look, this is an uphill battle for the Crusaders after cruising through 95% of the season to this point. Are they battle-tested enough to take a few blows and hit back?

Andy Shay: Westinghouse 26, Southern Columbia 20: I should know better than to pick against the five-time defending state champs when it comes to this game. I just can’t resist this once-in-a-lifetime collection of Bulldogs who are built to thrive in a game against a power like this right now. It’s their time. The run of championships comes to an end but not without a dog fight.

Geoff Morrow: Westinghouse 27, Southern Columbia 14: If you follow my picks, you know I’m usually a sucker for history. And nobody has more impressive PIAA football history than the Tigers, whereas the Bulldogs are the first Pittsburgh City League team to get this far in a quarter-century. But the Westinghouse results this season simply blow me away, especially what it did to Steel Valley in last week’s semis. Southern is awesome, but I’m guessing the run of consecutive state titles ends at five Friday afternoon.

Andy Sandrik: Southern Columbia 28, Westinghouse 25: Turns out Westinghouse is a much better team than any of us could have imagined, and the Bulldogs won’t be buying into that SC “aura.” The Tigers are in for a scrap if they want to secure their sixth straight PIAA title.

Adam Kulikowski: Southern Columbia 34, Westinghouse 28: Typically, I have a soft spot in my heart for the “underdog,” which has to be Westinghouse. However, picking against the team going for their sixth straight PIAA title, even in a year in which they haven’t had their typical horsepower, just seems unwise.

Andy Shay: Imhotep Charter 27, Pine-Richland 14: The Panthers are an elite PIAA powerhouse who have consistently flopped on this big stage despite bushels of talent. That is a concern here for me. Pine-Richland is a machine that doesn’t mind bumping and grinding and has a quarterback that will test the Imhotep defense. If the Panthers’ offense holds serve the defense will take it from there. Pine-Richland has to make this a shootout, and I’m not sure that’s in the cards against this Panthers D.

Geoff Morrow: Imhotep Charter 20, Pine-Richland 14: Both the Rams and Panthers feature great defense, but the Philly unit has barely budged during Imhotep’s playoff run, yielding just 6.2 ppg against some pretty decent competition. The Rams, who won titles in 2020 and 2017, have a great dual-threat QB, but my prediction is the Panthers snap a four-game championship game losing streak and pocket their first title since 2015.

Andy Sandrik: Imhotep Charter 23, Pine-Richland 21: We’ve been waiting years for Imhotep to make it back to the promised land. However, this stage hasn’t been the kindest to the Panthers, who haven’t won a state title since my 9-year-old was 2.

Adam Kulikowski: Pine-Richland 24, Imhotep Charter 21: Pine-Richland do-it-all QB Ryan Palmieri is the kind of X-factor that causes headaches for even the best defenses. He’ll need to if the Rams want to take home the  PIAA hardware.

Andy Shay: Belle Vernon 14, Neumann-Goretti 7: The suspension of Saints two-way hammer Shawn Battle hangs in the air over this one, and you bet it’s a major factor in who wins this game. We know Leopards RB Quinton Martin will play and the Belle Vernon defense stands tall against the best competition. Defense and running game sounds like a winning formula in December in Pennsylvania.

Geoff Morrow: Belle Vernon 17, Neumann-Goretti 13: If Saints stud RB/S Shawn Battle has his suspension overturned and is able to play, I might pick this game the other way. But as of now, no Battle means I’m going with the upstart Leopards and their stingy defense. This is the first PIAA title game appearance for both, though N-G is here all the time in hoops. The Saints seem like a team of destiny after shocking Wyomissing in wild fashion last week, but Belle Vernon is my pick.

Andy Sandrik: Belle Vernon 24, Neumann-Goretti 20: I know a team is about more than one player, but N-G losing Shawn Battle to suspension could prove to be devastating for the Saints.

Adam Kulikowski: Neumann-Goretti 26, Belle Vernon 21: Neumann-Goretti knocked off Berks County juggernaut Wyomissing last week to reach the championship bout. That momentum just might be enough to bring home the Saints’ first PIAA football championship if they can corral junior running back Quinton Martin, a Division 1 prospect with the chops to single-handedly disrupt an opponent’s game plan.

Andy Shay: Harrisburg 23, St. Joseph’s Prep 17: This is a business trip for the Cougars. They have been tasked with a mission, and as you’ve seen recently, they are dead serious about winning the first football state championship in modern Harrisburg High history. We all know the SJP pedigree and history at this level and in this game. They are dominant. But the Hawks this year have more gaps to exploit than most. The difference maker for me is SJP needs a little help from the Cougars – and that could easily happen – to win this game. Harrisburg does not need any assistance to lock this game down. Defense … Defense! Harrisburg is dialed in on that side of the ball, and that will be the difference in this contest.

Geoff Morrow: Harrisburg 27, St. Joseph’s Prep 24: Let’s consider everything the Cougars need to overcome. History: Harrisburg is 0-2 in PIAA title games, while the Hawks are 26-2 in PIAA playoff games with six state titles since 2013. Offense: SJP put up 400 yards and scored at will in the first half of last week’s semifinal blowout of Garnet Valley. Streaks: Hawks have won 11 straight games and have reached the state final every year except 2015 over the last decade. But Prep is beatable if you bring your best, as Pine-Richland (2017) and Mount Lebanon (2021) proved on PIAA’s biggest stage. And Harrisburg has been at its absolute best lately, decisively avenging both regular-season losses during this playoff run. This IS a homer pick, but it’s one I believe in because the Cougars are THAT team.

Andy Sandrik: Harrisburg 28, St. Joseph’s Prep 14: This is your reminder that one of the state’s best defenses is led by one of the baddest defensive ends in the country. Terrell Reynolds has 22.5 sacks this season. Re-read that if you have to.

Adam Kulikowski: St. Joseph’s Prep 32, Harrisburg 24: Can the Cougars win this game? Absolutely. They have the weapons across the board to take on the very best St. Joseph’s has to offer. But it will take a perfect performance.