Not like ’95: Aliquippa thwarts Bishop McDevitt’s bid for a second state title, 34-27, in PIAA Class 4A championship 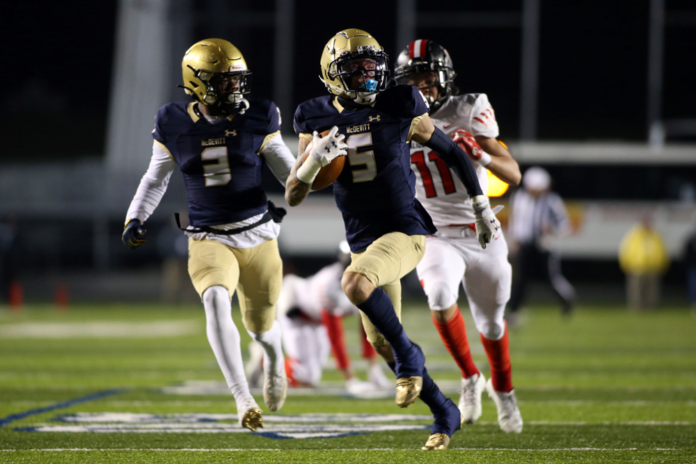 Bishop McDevitt fired its very best shot at Aliquippa in a highly entertaining and tense PIAA Class 4A final Thursday night at Hersheypark Stadium. But in the second half the Quips made every big play when it was needed and held off the Crusaders 34-27 to claim the state title.

The bombshells each team dropped to start this contest, which included four total touchdowns in the opening seven minutes, leveled off and the Quips and Crusaders went into halftime deadlock at 20-20. Each defense had found its footing in the game by the third quarter, and the second half opened with an exchange of punts. Then Aliquippa put together a drive that completely changed the dynamic of this game. The Quips traveled 80 yards in 17 plays, chewing up nearly nine minutes of clock, and scored on the first play of the fourth quarter to take a 27-20 lead it would never relinquish.

During the first half, McDevitt’s defense was losing the battle on first down as the Quips averaged 12 yards per carry. In the second half, the Crusaders’ D couldn’t get off the field when it had Aliquippa in a trick down-and-distance. The Quips executed and made plays when it mattered. On that critical 17-play march the Quips converted third-and-9, fourth-and-8 and scored on fourth-and-1. The next time Aliquippa had the ball it converted third-and-11 with a 40-yard pass and scored on an 8-yard touchdown run the very next snap to go up 34-20.

Hard to believe Tiqwai Hayes is only a freshman, but the Quips star RB had a monster game with 32 carries for 139 yards and three touchdowns. … McDevitt freshman QB Stone Saunders threw for 237 yards and three touchdowns, completed 50% of his 26 attempts and threw a pick-6 in the first quarter during the early four-touchdown flurry. … Quips QB Quentin Goode, a sophomore, was the difference in this game. He completed 9 of 12 passes for 127 yards. It wasn’t his volume but rather the timing of his completions that was the difference maker. … McDevitt rushed for only 50 yards on 18 carries, but that’s not a surprise against the Quips defense. … McDevitt took a 13-0 lead before the game was three minutes old. Aliquippa answered back with a long-range 42-yard Hayes TD run followed by a Cameron Lindsey pick-6 less than a minute later to make it 14-13 Quips with nearly five minutes still remaining in the first quarter. … McDevitt WR Mario Easterly had four catches for 128 yards and a touchdown. … Crusaders LB Ryan Russo had a game-high 16 tackes. … McDevitt DL Riley Robell had 12 tackles, including three tackles for a loss. … Aliquippa was 8-for-11 converting on third and fourth downs. … Aliquippa ran 35 plays in the second half, compared to only 15 for McDevitt. … Aliquippa had a massive offensive line with three of its guys measuring 6-foot-4, 325; 6-4, 345 and 6-7, 365.

Bishop McDevitt played a pretty solid football game overall and was simply beat by the better team on this night. There were some little things that you could point to that the Crusaders could have done better, but overall the Quips executed better when it counted and made every single big play in the second half. Right after that long Aliquippa drive of 17 plays, 80 yards and nearly nine minutes, the Crusaders quickly went three-and-out on the next drive and the lack of an answer by the McD offense in that moment sealed the deal. After the Crusaders’ punt, the Quips quickly scored again to open up a two-score lead.

At the end of the day McDevitt’s defense couldn’t get the stops it needed when it had the advantage to stem the tide. Five times in the second half the Crusaders’ D had the Quips in a bad spot, and each time Aliquippa made the play to keep its march to a state title on track. In a game where the margins are slim and the gap between the two teams was minimal, the Crusaders defense couldn’t make that big stop in a good spot to give its offense a chance.

“We’re a young team, and coming in here the nerves got to us. On top of that they are a good football team. We played our hearts out, but they were the better team today. That (drive) by them really took a lot out of us. We’re giving everything we have out there on the field and they’re driving like that … yeah, it’s draining.” — Bishop McDevitt DL Riley Robell

“We couldn’t get a running game going against them because they are so big. We did better in the second, made some adjustments, spread them out and ran traps. We didn’t have a whole lot of time to do it the second half. When we got the ball back after their big drive, we have the guy open on the play, they get the pressure on the QB, we get intentional grounding and that killed us.” — Bishop McDevitt head coach Jeff Weachter