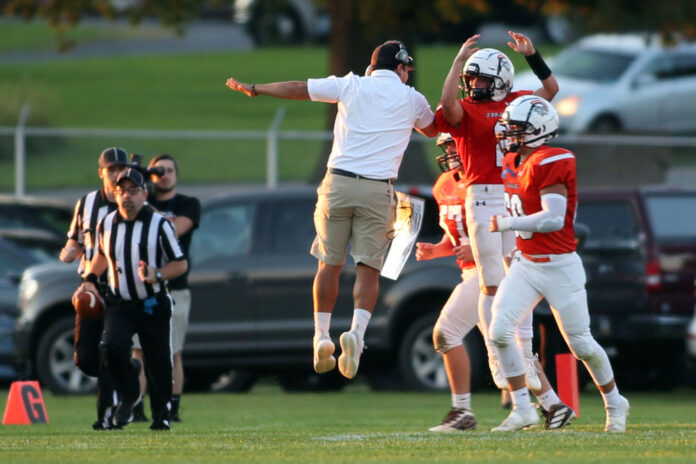 Upper Dauphin hoping to mine gold

Still jazzed after surviving a 58-48 shootout with Columbia, Upper Dauphin (9-1) will carry its eight-game winning streak into York for a matchup with unbeaten York Catholic (10-0) for the District 3 Class 2A championship. If Kent Smeltz’s Trojans are successful Friday night on Springettsbury Avenue, they’ll claim their second 2A crown in three seasons and set up a state tournament scrap with District 12 champ West Catholic (3-7).

With Brady Morgan, Christian Snyder and Aiden Wiest combining for nearly 260 rushing yards and five touchdowns — not to mention a combined 70-yard fumble return from Austin Hartman and Morgan — UDA opened a 44-12 halftime lead last week against Columbia. QB Wil Laskowski added one rushing TD and connected with Snyder for a 59-yard score, but even those numbers weren’t enough to deter the Crimson Tide.

With QB Robert Footman throwing for 500-plus yards and wideout J’von Collazo setting a state record with 357 receiving yards, the Tide rallied and rallied only to fall short as Upper Dauphin advanced. Meanwhile, York Catholic’s top-seeded Fighting Irish were disposing of Susquenita 43-7 in the other semifinal. Dual-threat quarterback LeVan McFadden rushed for 121 yards and two touchdowns, threw for 104 more and another score, and even returned an interception for a fourth TD as Eric DePew’s squad won going away.

Nick Creisher added 100 rushing yards and one touchdown on 21 carries, but he also registered a safety when he pinned the Blackhawks’ Bryce McKee in the end zone. Since the seventh-ranked Irish — three rungs higher on the 2A ladder than UDA — have championship-game experience after their loss in last year’s 2A championship game to Camp Hill. Should be a good one.

Finally able to get on the scoreboard in the second quarter, Juniata parlayed its powerful ground game and stifling defense into a 41-12 triumph over Bellefonte in last weekend’s District 6 Class 4A title game. Kurt Condo’s Indians (9-2) aren’t done, however, as they’ll return to Altoona’s Mansion Park to square off against Pittsburgh’s USO (3-6) — a cooperative arrangement between University Prep, Sci-Tech and Obama Academy.

The winner of Saturday’s regional clash will advance to state play, meeting the District 10 Class 4A champ, either Meadville or General McLane. While Juniata rattled off the game’s first 41 points behind a productive ground assault fueled by Zachary Harr (175 yards, 3 touchdowns), Waylon Ehrenzeller (86 yards, 2 TDs) and Seth Laub (58 yards), the Indians also benefited from the return of senior quarterback Jacob Condo. Out since suffering a broken collarbone in a Week 3 loss at West Perry, the younger Condo didn’t run the ball yet completed eight of his 15 pass attempts for 67 yards.

That was more than enough offensive balance and working room for the Juniata defense, which sacked Bellefonte QB Trevor Johnson five times and limited the Raiders to minus-40 rushing yards. Johnson wound up throwing for 239 yards and a pair of scores, but that damage was inflicted late. USO advanced by squeezing past District 9 Class 4A entry DuBois 14-13.