Making the Grade: A breakdown of Steel-High’s 16-14 victory against Bishop Guilfoyle 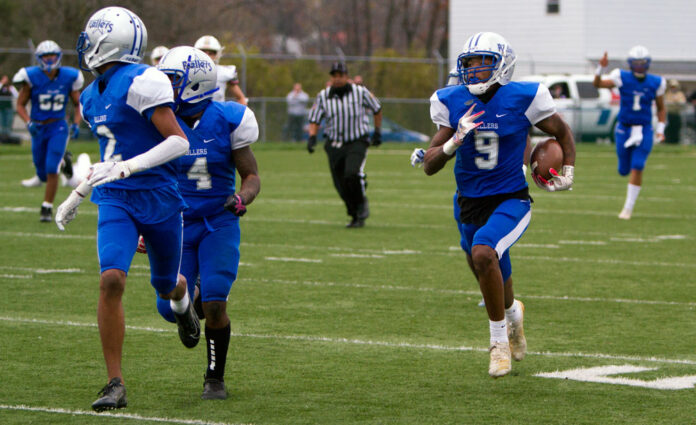 Defense dominated the PIAA Class 1A semifinal at Cottage Hill between Steel-High and Bishop Guilfoyle. The Rollers earned their first berth in a state final in a dozen years on the strength of a field goal. Steel-High and field goal to win it. Welcome to COVID-19 football in 2020.

You have to give the District 6 champion Marauders credit. They did everything right to win this game. Their pass defense was outstanding, they moved the chains and kept the ball away from Steel-High by converting on third down.

This game went sideways for the Rollers in a hurry with a fumble returned for a touchdown on the opening play. They trailed 7-0 until the fourth quarter on the strength of a defense that was outstanding on first and second down but struggled to get off the field. It was a classic bend but don’t break.

In the end the best player on the field, Mehki Flowers for the Rollers, was the difference maker in a 16-14 victory.

And for the second week in a row a defensive holding call gave the Rollers a second chance when it looked like their season was over. That’s a tightrope act right there for you.

Quarterback: Senior Konner Kiesewetter isn’t a pure throwing quarterback by any stretch of the imagination. He attempted only 11 passes, but he hung in the pocket and delivered the goods by catching his receivers in stride. And the arching deep ball hit the mark almost every time. He completed only six passes but averaged nearly 31 yards per completion to finish with 185 passing yards. He gave his team a shot. Grade: A

Running Back: The best player on the field for the Marauders was senior RB-DB Keegan Myrick. And he showed up. He was sharp on the outside and pushed the pile when he ran inside. He carried 28 times for 117 yards. And the Rollers defense did a good job against him. He’s a kid any coach would love to have. Grade: A

Wide Receivers: Haiden Garner is only a junior and lined up at QB and RB. He’s a weapon as a receiver. That 58-yard catch-and-run was impressive in the dying seconds. He pulled away from a couple Rollers to get extra yards. His other grab went for 39 yards. I didn’t see one catchable ball dropped.   Grade: A

Offensive Line: So, the two tackles on the outside and the tight ends were fabulous. For the inside trio it was a struggle as there was nothing available between the tackles. But outside there were clean holes and those seal blocks were executed well all game. Grade: B

Defensive Line: There was room to roam up the middle most of the game, and that was a problem. Those jet sweeps were handled well in terms of sealing the edge. I think at the point of attack they were getting pushed around more than they are used to. Grade: C+

Linebackers: There was a lot of run blitzing by the Marauders, and it was coming from everywhere. They closed down a lot of big gainers in a hurry by making sure tackles in space. Physical and quick. Grade: B+

Secondary: One play was a huge difference. If you give up one big play to the Rollers, you’ve had a good day. But in a tight, low-scoring game it was that one 87-yard play where they missed four tackles that stands out. Otherwise, they kept everything in front of them and provided good run support on the edge. Grade: B

Special Teams: I loved the plan for kickoffs and punts to keep the ball away from the speedy Rollers return guys. The execution was flawless, and the coverage was outstanding. I don’t get the fake punt in the fourth quarter on fourth-and-1 around midfield. That was a mistake. And two missed field goals was a difference maker on the scoreboard. Grade: C

Quarterback: Alex Erby struggled all game. The freshman struggled to make the short passes look easy, and his two interceptions in the first half were huge mistakes in a 7-0 game. One came in the red zone. His best throw of the day was a 15-yard dart over the middle on the eventual winning drive on fourth-and-12. He’s young, and this was a high-stakes game. He had plenty of help on a day when he struggled. Grade: C+

Running Back: Odell Greene was a beast inside but never shook loose for a big one. That’s a credit to the other team. He navigates in tight spaces inside the tackles so well. Finished with a game-high 131 yards despite going out twice with injuries. He gets my game ball. Grade: A

Wide Receivers: There is a reason Mehki Flowers is an FBS recruit. With the game on the line he took the ball on a short pass, broke four tackles and turned it into an 87-yard touchdown. He was fantastic despite double coverage all game. The other receivers struggled to get open and finished with only one catch. That’s a concern. Grade: A-

Offensive Line: Run blocking was simply outstanding. Against a big, physical defensive front, they won way more battles than they lost. It was flat-out impressive. Pass blocking was a struggle at times picking up the blitz combinations, but it didn’t hurt them.  Grade: A

Defensive Line: I think this group — Tydree Holland-Ali, Andrew Erby Jr., Eugene Green and Kyler Raye-Williams — was the biggest single reason the Rollers are still alive. They limited BG to 122 rushing yards on 44 carries. That’s a stellar 2.8 yards per carry. They owned first and second down. Grade: A+

Linebackers: Inside ‘backers Jaeion Perry and Amari Williams are only freshmen. Whoof. Those two are going to be very, very good. They didn’t let anything inside get past them. Outside guys struggled at times to get off blocks and close down the edge on those sweeps. Inside, though, was outstanding. Grade: A-

Secondary: I’m not going to lie, this group struggled and it was kind of surprising. It was big play after big play, and on third down they struggled to make an impact. BG picked on junior Daivin Pryor, and he struggled to cover that over-the-top pass that nearly was the difference maker. Grade: C

Special Teams: All I have to say is Bryan Hernandez kicked a 34-yard field goal to win a PIAA semifinal and punch the Rollers’ ticket to Hershey. A KICKER wins it for Steel-High. His kick would have been good from beyond 40 yards. It was pure. And the game was on the line. Grade: A+