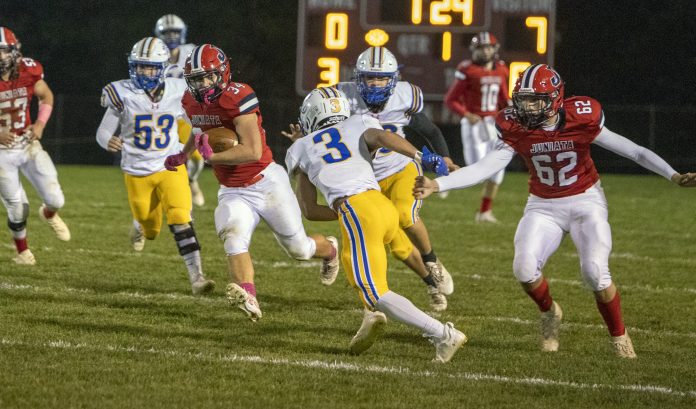 If Juniata has anything going for it as it makes a return trip to the PIAA Class 4A football playoffs, it’s this: The Indians have experienced Meadville’s high-octane act – or an earlier version of it – a year or so ago.

While seeing what the Bulldogs do up close and personal is one thing, trying to slow Meadville’s high-performance offense is something much different.

Yet that’s what Kurt Condo’s Juniata Indians (8-3) need to do – at least often enough to give their offense opportunities to execute what they’re proficient at – when they square off against Meadville (11-1) Saturday in Centre County’s Howard-Milesburg-Snow Shoe Metroplex.

The winner will meet either unbeaten Jersey Shore (12-0) or Allentown Central Catholic (7-5) in next weekend’s Class 4A quarterfinals. Shore is perched one rung higher in the Class 4A rankings than No. 4 Meadville.

Regardless of where the game is being contested, Condo’s defense-minded bunch is trying to avoid a repeat of last season’s outing – a 34-27 Juniata loss.

Yet the Indians may need to score a few more points than they typically do or, more likely, try to control the ball, milk clock and shorten the game against the fourth-ranked Bulldogs, who are averaging 51 points per contest.

Meadville last weekend eliminated University Prep/Sci-Tech and Obama Academy of Pittsburgh 40-12 in Pittsburgh. Ray Collins’s squad was unable to complete either of their pass attempts and both were picked.

Although Meadville wanted to display more of its spread offense against USO, nasty weather conditions eventually caused the Bulldogs to shelve the spread and stick to a Wing-T scheme that piled up 454 yards on the ground.

Brady Walker rushed 24 times for 202 yards and three touchdowns to lead the Bulldogs – Walker has piled up 1,524 yards and 20 scores thus far – while quarterback/running back Khalon Simmons added 199 yards and two TDs on 24 attempts. Simmons has cracked 2,000 yards while scoring 37 times.

Nonetheless, the Bulldogs were up just 18-12 after three quarters – one of USO’s scores was a 70-yard return of a punt that shot up the missile silo and failed to clear the line of scrimmage – before pulling away.

Amarri Lewis chipped in 65 yards on 11 carries for Meadville, which has won its last five contests. Last weekend’s victory was the Bulldogs’ tightest since the win streak was ignited with a 77-0 blasting of Franklin.

Ty Tidball paced Meadville with eight stops, one tackle for loss and a fumble recovery. Walker totaled six tackles, including two for losses and a sack.

Two days before Meadville torpedoed USO, Juniata was busy grinding out a 17-7 triumph over DuBois in the District 6/9 subregional. Condo’s squad didn’t throw a pass after the break, instead churning out 164 yards on 30 tries.

Both Juniata touchdowns arrived after the break – Waylon Ehrenzeller rushed 20 times for 135 yards in his first action since he was injured during a 13-7 Week 7 victory at Boiling Springs – as Ehrenzeller ran the ball in from 11 and 24 yards out. Ehrenzeller’s second TD came with 1:13 gone in the fourth quarter.

Bruising fullback Seth Laub added 59 yards on 11 attempts for the Indians, who held a 3-0 halftime lead on the strength of Brant Walters’ 25-yard field goal.

QB Aaron Kanagy was 2-for-13 passing for 56 yards, but he was picked off three times in the opening half. Ehrenzeller also put the ball on the ground, losing the fumble.

While Laub and Casey Smith pocketed interceptions, Makih Hunt paced the Indians with 10 tackles. Taylor Smith and Jonathan Kauffman each totaled eight stops, with Kauffman recording a pair of sacks.

Juniata will need to play well defensively against Meadville and keep the game close, or Condo’s Indians will spend a sizable portion of the 48-minute exercise chasing the Bulldogs. And that’s not a favorable situation to be in.