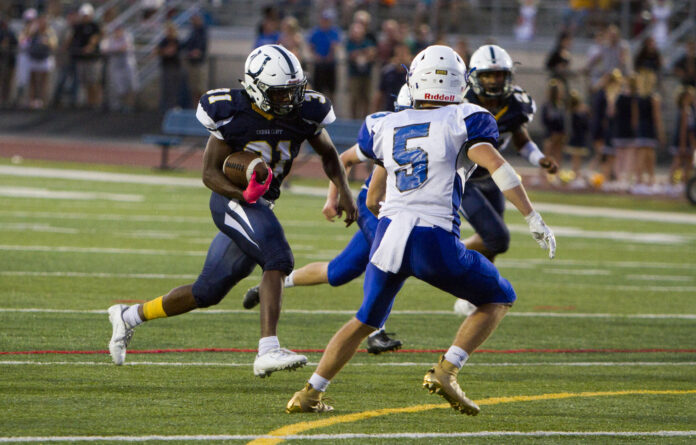 In this section, we’ll feature one former Mid-Penn player who had a particularly impressive week in college football.

The touchdown, which came with 3:58 left in the game from a yard out, ended a two-game losing streak.

Morris, a standout with the Colts in high school who set the career rushing record there, had a season-best performance Saturday. He led the team with 95 yards on 17 carries, and had three receptions for 18 yards, in a 31-29 win over Lock Haven.

For the season, the redshirt freshman now has 40 carries, 141 rushing yards, two touchdowns and six grabs for 30 yards.

CV grad Tim Kissinger drilled a 31-yard field goal in the win and made two of his four PAT attempts.

In this section, we’ll list off some of the performances from former Mid-Penn players now in the college ranks

Grant Breneman (Cedar Cliff) was in the midst of a second consecutive good game before an injury knocked him out of Colgate’s 38-21 win over Georgetown. Breneman’s day ended with 173 yards and a first-quarter TD on 13 of 17 passing, plus 11 carries for 36 yards.

Grant Smith (Central Dauphin) caught a pair of passes, including a 10-yard, second-quarter touchdown in IUP’s 28-23 win over Gannon in PSAC action. Chambersburg grad Tyler Luther made all four PATs.

Slippery Rock’s Devyn Clair (Bishop McDevitt) had three tackles in the Rock’s blowout 75-0 win over Clarion to improve to 5-0.

Another former Cougar, Texas A&M’s Andre White Jr. had a season-high eight tackles (five solo), third on the team, in a 26-22 loss to Mississippi State.

Bill Williams (Camp Hill) ran 10 times for 29 yards, had a 6-yard reception and recorded a tackle in Shippensburg University’s 59-27loss to Shepherd, the Red Raiders’ first loss of the season. Lower Dauphin product Evan Morrill had three grabs for 25 yards in the loss, and defensive tackle Laron Woody (Middletown) had two tackles.